It is 0145 and the Ranger platoon commander has been woken up and assigned a mission against the godless communists invading Puerto Oro from the north. All I’d wanted was a mission…and for my sins, they gave me one.

It was “anti-personnel ambush” just south of a small village that no one cared about enough to even give it a goddamn name. It didn’t matter. We’d be out there wasting PSRF guerillas and that was alright with me. Three weeks in this shithole and I’d barely seen anything more dangerous than the skanks down at the local watering hole. 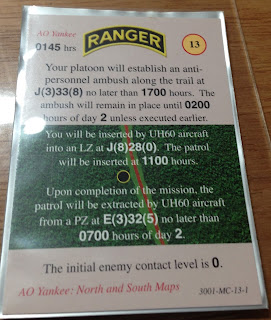 By 0300, I’d gotten the briefing and planned out my next move. The platoon was to be inserted by UH-60s to the west of the objective. We’d move out in a zigzag fashion to get to the objective release point two kilometers away.

If we weren’t blown away by an enemy ambush ourselves, we would get to the Objective Rally Point, send in the rear and flank security teams and then position the assault and support teams just off the road in the bushes. The security teams had their AT4s to deal with any technicals. I made sure as hell to assign Javelins to the support teams just in case we ran into any enemy tanks.

There was no guarantee of enemy contact but S2 said the trail was heavily traveled by PSRF guerrillas. We had until 0200 to kill some bad guys on the road. After that, time was up and we were to go to our PZ about four klicks to the north.

The major concern wasn’t so much the ambush. It was the trails we’d have to cross getting from the LZ to our objective and the objective to the PZ. There were three trail crossings we would need to undertake – two of them along the same damn trail. If there was a good chance of something going wrong, it would be right there. I made damn sure the platoon rehearsed the danger crossings before we boarded the Blackhawks.

We inserted into the clearing by 1100 with no problems at all. Travel from there to the objective was pretty easy. The jungle was light in most places. Hell, the first trail we needed to cross over was empty of traffic. It seemed like someone was looking out for us.

We arrived at the Objective Rally Point and I conducted the leader’s recon with a small element. The ambush site offered plenty of cover and concealment for the assault and support teams. By 1430, we were ready to go. The claymores were planted. The avenues of fire were staked out. The security and assault teams were all in place. We just needed some poor fuckers to shoot at.

At around 1600, the right flank security team heard a deep rumble of approaching engines and alerted me that some bad guys were likely coming. An understatement. We had no less than TEN T-55 tanks heading down the road towards our position. Werner asked me what we should do. “What the hell do you think? Keep everyone’s goddamn heads down and hope they don’t see us!” PSRF guerrillas, my ass. These were regular army from all the way north in Costa Verde. A nice A-10 strike would have made short work of them but we were danger close. I jotted the info down and would report it when we got back.

The tanks passed by without noticing us. With a pair of Javelins, we might have taken out a couple but the rest would have ground us into a thin paste.  We would wait until something a little more reasonable came along.

After forty-five minutes of waiting, we got what we wanted. A single truck with three peasant guerrillas in the back drove lazily down the road. Nothing great but it would have to do. I started the ambush off with a Javelin from the support team. That was all that was needed. All the bad guys were crispy dead. The truck was reduced to a heap of burning metal and ash on the side of the road. I sent my assault team out to check the bodies but there wasn’t much left to find. It was time to get the hell out of there.

The sun had just set and we were crossing a trail for the second time. Things had been pretty quiet since the ambush. While we were about to go over the road, a truck came barreling down towards our position and stopped right in front. About five guys in the back started shooting at us. Big mistake. The second Javelin was put to good use and nuked the hell out of the enemy technical. So far the score was pretty lopsided. Us: 8 Them: 0. Send more commies. Please.

The terrain was very rough as we went north towards the PZ. We found a swamp that wasn’t on the map and spent thirty minutes walking through the waist-high muck before we finally got out of it. Our last trail crossing was uneventful, which was almost disappointing considering how much ass we had already kicked in this sector already.

Halfway between the trail and the PZ, the shit hit the industrial ceiling fan.

Artillery poured down on us like a drunk pissing on a sidewalk. We took cover but Barese was killed immediately. I ordered the patrol to disengage by bounds (dumb move – we should have used the clock method). While getting out of there, three men from Charlie Squad – Stephenson, Arata, and Keith- were seriously wounded. After thirty minutes, the patrol was more or less back to normal. No one gets left behind in the jungle on my watch – I sent two squads back to retrieve the wounded and dead.

We still had plenty of time for exfiltration so we took our time getting to the PZ. After a two-hour wait, the Blackhawks arrived and pulled us out of there at 0300. The three guys got sent to a field hospital to get patched up just enough that they could fly ’em home by the afternoon.

The battalion commander was chuffed to hear that the ambush went off without a hitch. The photos and reports of the T-55s in the area were a big surprise for everyone. Things could have gone better but there’s not much you can do when you’re getting hit with mortars by surprise attack. Someone must have followed us or seen us on the way back. It was my first time under enemy mortar fire and, I’ll admit, it was damn scary. Scarier than the trucks and even scarier than seeing all the tanks in the road back at the ambush site. Not having someone around to shoot back at makes it all the more frightening.

100 points for successful ambush
-5 for 1 KIA Ranger
-9 for 3 Severely Wounded Rangers
-10 for crossing danger area within 2 klicks of objective
-10 for not securing the far side of the objective before performing search of enemies post-ambush
Total: 66 Points
Result: Victory