I’ve spent some time with Berlin ‘85 over the past couple of weeks now. I find it to be a bloody game with a peculiar agony awaiting both players who venture down its path. If you have already played the game, you will understand exactly what I mean. For those, who haven’t tried it, you’ll get an idea when you read the full playthrough report.

I wanted to get something out there for B85 since I’ve been getting lots of people asking and posting and commenting about it. So here’s the Setup and some notes about the game and why I’ve made certain decisions.

The NATO player sets up first. For this scenario:

The West German police (the blue units) set up on Supply Hexes anywhere in West Berlin and on any airfield control hexes.

The Americans set up in the American sector (duh!) two hexes from any barracks hexes. The French and British do the same in their sectors.

But before we do all that, let’s look at the lay of the land, my son. 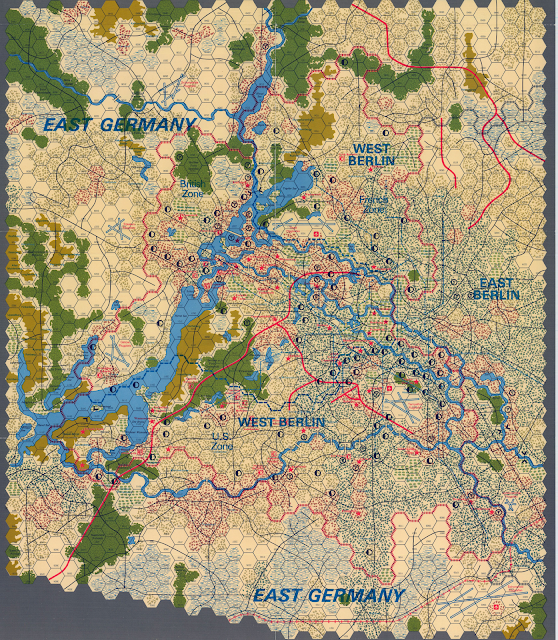 We have one natural barrier running north-south into the British sector. A minor river running east-west in the American sector. And nothing in the French sector. The rest is just ugly city fighting.

There really aren’t any clear ways of saying this but you’re generally screwed from the outset. The question is…just how long will it take until we’re not only generally but completely screwed? For good measure, the city starts off completely surrounded by East German and Soviet forces so there will be no breakthroughs or brilliant counterattacks here.

Setting up in Urban or Industrial areas is good. These give the most favorable combat column shifts for the defender (4 and 3 respectively).

Setting up in a POL site is extremely bad. It doesn’t take much artillery firepower to completely wipe out these hexes and cause a firestorm that kills everything within it. Most notably, firestorms can spread to other adjacent POL hexes so just being around these things is bad.

Barracks and Air Control Towers are worth two surrender points versus the normal one point for other victory hexes. These are worth keeping a unit in even though it’s gonna be targeted like crazy and will probably not last long at all.

Autobahn hexes should be protected or at least have a unit close enough to project a ZOC into in order to stop the WP from zooming around the city at will.

Now sigh and hold your head in your hands. The Warsaw Pact will get through and your little outpost will fall. There are too many holes in the dike. Too many bad guys coming at you all at once.

The best I can do is set up my West Berlin police units in the heart of Berlin where they gain the greatest combat shifts and where they can protect the U-bahn from being used as a Warsaw Pact merry-go-round. I also set up a few on the outskirts to serve as speed bumps for vital crossing points for ferries.

Now it’s time for the rest of the NATO units to set up. First, we’ll set up the US units.

I try to space out the mechanized infantry units evenly enough. I set them behind the bridge crossings near the heart of the city, hoping this sends the WP further west on its attack. Of course the coverage isn’t perfect but there was an attempt.

Artillery goes way back to hex 2136 and I shore up my bridge defenses with a couple of MP and Engineer units. Tempelhof is too lightly defended. I know it. But that city center will hold for quite some time before it crumbles…hopefully.

British Garrison
Now it’s the Brits turn to set up in their sector. I think the biggest question for the British garrison is whether or not to try and defend Gatow. It would require a ton of resources to try and hold while at the same time leaving so many other areas of the city without coverage.
I elect to abandon it for the most part, except for one token unit to divert a few WP units from their rush towards the city center.
Most of the Berlin Brigade sets up west of the river, hoping to block the attackers long enough to get help from somewhere – anywhere – in a timely manner. The artillery sets up dangerously close to the river bank on the east side. The hope is to wage a fighting withdrawal across the river and draw east towards downtown.

Then we at last come to the French sector. Woo boy. The French have no real natural barriers against the WP. The barracks are set too far north and there simply aren’t enough French soldiers to adequately defend the sector.
The best I can do is set up some kind of awkward defense based around Foch Barracks and try to keep the WP attacking from the north at bay for a turn or two. The major routes to the city center are blocked off by ZOCs but this is absolutely a weak point from a numbers and terrain perspective.
Well, that’s my unhappy setup for the NATO forces in this scenario. Let’s hope they manage to hold.
For the Warsaw Pact troops, the decisions are much easier.
1st East German
No-brainer here. We have prescribed hexes for setup to the southeast of the city. Obviously, these units will be rushing towards the US sector and trying to clear resistance on the outskirts of the city.
14th Guards Mechanized Division
Sets up within a certain number of hexes of the southern edge. These guys go straight up the middle and try to cut off the defenders to the east and link up with whatever remains of the 1st East German division after it cuts its teeth on the American defenders to the west.
19th Soviet Mechanized Division
Set up to the west of the city. These guys are aimed at the British. Do we split them up and take Gatow or go headlong into the British defenders. I want those VPs so I’m gonna send three guys down to take Gatow airfield. I’ll keep one regiment in reserve with the rocket artillery placed to support either front. I’m not expecting anything amazing from these guys until the French are taken care of to the north and I can get in behind the Brits with the 6th Guards Mechanized Division.
Soviet 6th Guards Mechanized Division
These guys set up to the north. I put three units west of the river and the rest of them to the east. The main body will advance directly south and destroy the French. The smaller group of units will advance south and wreak havoc in the rear area of the British Sector. Hopefully they can even take out an artillery unit or two to ease the passage of the 19th Sov. Mech Division.
34th Artillery Division
These guys are set up in East Germany or East Berlin within a certain number of hexes from the map edge. I have no solid plans for these guys other than to move them towards the city center and use for incidental support for whatever they can hit out and reach. The East Berlin police are useful for protecting these units so I’ll set them up in East Berlin.
East Berlin Police
I like to use these guys to protect the 34th Artillery division. Just place them in East Berlin and block off any ZOCs in the unlikely case that NATO tries anything foolish.
Conclusion:
And that’s it for setup!
Here’s the final look at things for the overall picture so you can see how badly the NATO garrison is hosed. 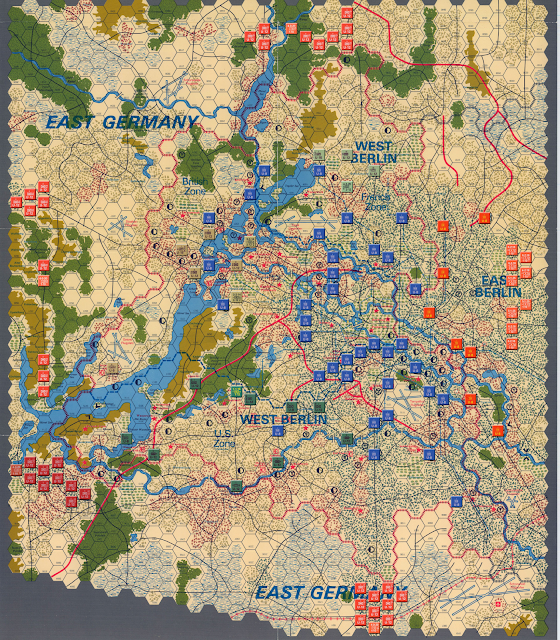 Some gamers don’t like to play games like this where the conclusion if foregone before play begins but I think some pretty creative games have come out that deal with this kind of situation. For example, I really enjoyed the victory and loss conditions in Phase Line Smash. I thought they were a terrific way of handling a superior force beating the crap out of a smaller one. I also liked how Unconditional Surrender handled the inevitability of Germany’s defeat in its game. So for all my defeatist talk throughout this blog post, I am actually really pumped to try Berlin ’85.
Next up! Turn One – The Battle Begins!