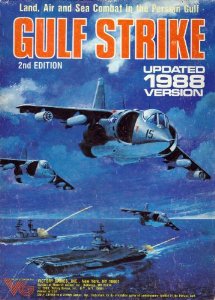 It’s late in the game now for the Soviets and the US as the Iranians try to salvage what’s left of their attempt to dominate the Middle East by taking the Straits of Hormuz. Last I left off, the Soviets had just intervened on their behalf, pumping men and equipment and aircraft towards their conquest of Saudi Arabia. The Saudis have been managing to hold off the Iranians from Riyadh thanks to a small but tough defensive effort in rough terrain.

However, things aren’t going to be going so well for long. The Saudis lost a major airbase near Al Hufuh last turn. They also suffered the loss of an armored brigade protecting the shortest route into the Saudi capital. Can the Americans and their allies manage to fend off the Iranians for another turn?

Nothing happens. The war continues into its fourth week. What initially looked like a quick jaunt down the peninsula looks more like the western front in 1917 every passing day.

I move the 101st airborne into Dijbouti with its new base and a C-130. I get an AH-1 in there too but I’m not sure what to do with it. I probably should be doing better with this stuff but at some point, you need to just make mistakes so you can learn with them.

I really would like to get an airbase somewhere in Saudi Arabia for the Soviets right now but I haven’t planned properly for it. I use the IL-76 to fly in a couple of truck units and a supply depot into the Soviet airbase sitting in southern Kuwait. I’ll need to start building a supply network for the Soviets to use.

Not much to do here. The Iranian units near Riyadh should be put into reserve but they are too far from an HQ unit. The 5th Iranian armored division sitting in Al Hufuh gets put into reserve just to see what will happen.

The US gets no Naval Movement Points and the Soviets get only one. That’s a nice break for the Russkies, who got their navy in the Indian Ocean absolutely crushed last turn.

The US and its Allies still go first here. The Russian base in Afghanistan is full of Tu-26 bombers that will be in easy reach of the US carrier group as it approaches the Persian Gulf. I decide to send my B-52s over for a visit. The bombers are detected almost over target and intercepted. The MiG-23 interceptors scramble and manage a very lucky two hits, which aborts the mission and sends the B-52s home. 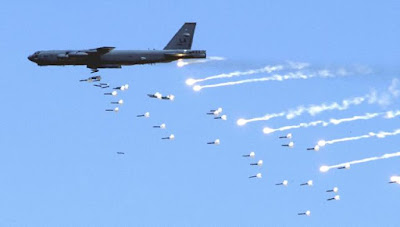 The 4th Saudi Mech. Brigade pulls back towards Riyadh, reaching hex 0562. The elite Saudi Gaurds Mech Brigade pulls back to 0461. This looks like the last stand before the Iranian tanks roll into the city. The units are in Hasty Defense formation. No combat is declared.

The Saudi navy still hasn’t been cleaned up properly and although it hasn’t caused any real problems so far, the Iranian navy is bottled up and can’t do much of anything. The Iranians send a P-3 over on an anti-ship mission but no luck there.

US Special Forces conduct a hit-and-run on an Iranian truck unit transporting an Iranian airbase south of Kuwait. The mission goes well and one hit is assigned to the truck.

US and allies get 2 Naval Movement Points. USSR and Iran get a whopping 5 NMP.

The US SSN sneaks up on a Soviet CVH off the coast of Yemen and unleashes its SSMs from two hexes away, inflicting a hit on the carrier group. One of the hits is assigned to the Yak squadrons on Intercept mode.

Not much going on here. I send over a supply depot from Tehran over to the Iranian airbase in Kuwait. From there, the truck transports will move them south. The Soviets send down their carrier group and DDG towards the US submarine and go hunting. Unfortunately for them, they can’t detect it.

No declared combat so we go to the third action stage.

The Soviets get a supply depot set up in 1352. This will hook into their new airbase that will be planted in eastern Saudi Arabia next turn. Just for good measure, I send an air defense brigade together with it.

The Iranian 3rd Mechanized Division has been sitting on its keister in hex 0860 way too long. I get it out of Hasty Assault formation and move it along the road towards Riyadh. As soon as the lead elements enter hex 0661, a US Ranger detachment greets it with an ambush. The Iranian unit is forced to retreat and once again sits uselessly in hex 0761.

The Iranian 4th Armored Division (with a brigade from the 7th Infantry Division) attempts to sneak around the Saudi left flank and it too gets nailed by another detachment of US Rangers. It incurs 4 additional movement points attempting to enter the hex and will go no further this turn.

The Iranians get a truck unit down to 1352, planting their supply depot in the same hex as the Soviet one. Seems like a fairly safe place since we have air defense units set up. On the other hand, I get a bad feeling when I see such a tempting target sitting there on the map like that.

Hurting for an HQ to come down and coordinate the action better, the Iranians send down an HQ sitting in 0755 towards 0457. Miraculously, it is not ambushed, raided, or bombed to hell before it gets there.

Iran gets an airbase set up in 1758 after transporting it down there by truck. An F-4 and F-5 are ferried over. Humble beginnings but it’s a far sight better than having the nearest airbase way up in Kuwait.

The Soviets send down their Su-24s from their base in southern Kuwait to strike at the Saudi ground forces near Riyadh. The defenders manage to inflict a hit on one Su-24 while the other one has no luck hitting the Saudi enemy. 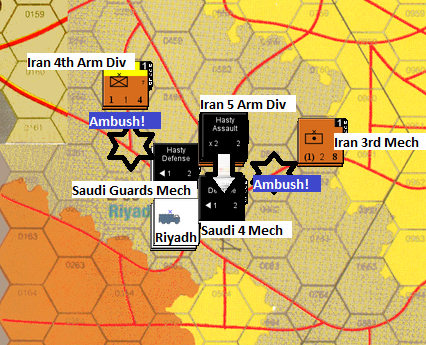 The 4th Mechanized Brigade is eliminated after 1 hit. The 5th Armored Division goes Movement to Combat formation and advances into the defender’s hex.

The Saudis lose 4 supply points to Yemeni guerrillas, which just seems harsh now that Riyadh is almost captured.  Everyone’s units are amazingly in supply at the end of this turn.

Well, the Saudis have pretty much had it. That’s not bragging. They should have been destroyed a long time ago but thanks to some pretty bad planning on the part of the Iranian player, they are still alive and kicking as we go into turn 10. The Soviets have done very little so far in the game except had their navy destroyed. The Americans have done a great job of using special forces to thwart the Iranians at every move. I think the special forces options are my favorite part of the game because it adds so much unpredictability. For such a small price, you get to needle and harass your opponent with glee.