Late last year, I had the pleasure to fill in as a guest editor for Yaah! magazine, the No-Holds Barred badboy of the gaming world. Mark H. Walker, the head honcho of Flying Pig Games and Tiny Battle Publishing, was kind enough (or crazy enough) to let me at the controls of his baby and he gave no quarter, throwing me in the deep end on the first day. I had a blast! 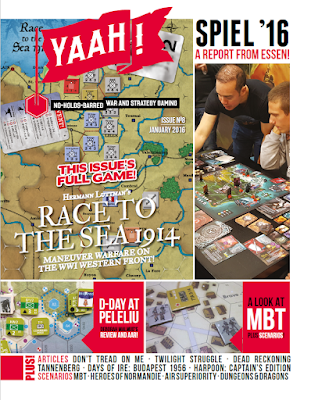 The first thing that caught me by surprise was just how much work goes into a single issue. With so many articles coming in and so many requests for articles going out at the same time, I was overwhelmed in the first week or so before I finally got my sea legs and managed to figure out where I fit in with all the chaos going on around me. The second thing that struck me was just how much talent I had to work with. Each writer had their own strengths and unique voice – this issue featured articles from all over the world – we had writers from Europe to North America to Asia.

This issue’s feature article is from the talented Ania B. Ziolkowska, who went to Essen, Germany to cover Spiel 2016 in late October. Her story was an exhaustive days-long tour of the Messen Halls, showing her impressions about certain games, giving details about what she played, and gauging the overall health of wargaming at the convention since her previous visit four years prior to writing the article. As you read through it, you get a real sense of what it’s like to visit THE gaming epicenter of the western world for a few days each year. You also find which way the wind is blowing for the future of wargaming and it’s surprisingly positive news. This was a major article for Yaah! – the longest (14 pages) that has been run in its short history.

Of course, I would be remiss to leave the game unmentioned. Hermann Luttmann’s Race to the Sea 1914 uses a very unique game system that he has designed as a labor of love. The game, which focuses on the last real mobile battles of the western front in the early days of World War I, uses cards to resolve combat between two sides. The result is an interesting system that turns the traditional “roll dice – consult CRT – apply hits” approach on its head. In Race to the Sea fire combat, the attacker tries to inflict hits on a target unit and the target unit will try to reduce the number of hits scored. This is all done smoothly by both sides flipping over their combat cards and checking the “Fire Combat” section of the card. Pretty cool. In assault combat, both sides’ units attempt to score hits on the other side. Again, this is done by flipping combat cards and checking the assault combat section. There is no need to calculate odds here – the whole design is oriented on keeping the players’ attention riveted on the map rather than on a CRT.

There were so many other great articles in this issue. Fred Manzo’s article about Dead Reckoning strategies is a must-have for anyone curious about the game. Heck, I had no idea about it until I read the article and now this game is on my wishlist. I should note that Dead Reckoning is a Hermann Luttmann design so if you can’t get enough of Herm’s stuff, you’ll certainly enjoy this issue. Fred and Hermann also designed a scenario for DR that’s included in this issue. “The Alamo in the Rockies” is all about getting as many human refugees off the map as possible before the inevitable zombie hordes crash through the gates and feast on your brains.

I had the great pleasure to interview the designers of Days of Ire: Budapest 1956 for this issue. Katalin Nimmerfroh, Dávid Turczi, Mihály Vincze are three young game designers and artists who designed this game based on the Hungary Uprising in October 1956. The game is heavily inspired by classics Twilight Struggle and Pandemic. This interview serves as close-up into one of the games Ania talked about in her feature article from Spiel.

Deborah Malmud is a rock star writer and game reviewer. She has a terrific talent for conveying her sense of humor, game-related frustrations, and turn-by-turn victories in her articles. This issue is graced by her review and AAR of D-Day at Peleliu. If you have played any of John Butterfield’s other solitaire D-Day designs, you’ll get a very good idea of how this one is different from the others and why it’s so good.  She also wrote about White Dog Games’ 2015 release Don’t Tread on Me, another solitaire game that puts the player in the shoes of the British trying to put down those pesky Americans during the Revolutionary War. She has a nice way of skipping through the tedious parts of games (something I could probably learn from) to showcase the game’s main action. Her AAR of the game reveals why she says this is a must-have for solitaire gamers.

Matt Foster looks at a game called Tannenberg from Schroeder Publishing. As a part of the larger Der Weltkrieg series,  Tannenberg is a small but intriguing addition. This system has been around for about 20 years but it still seems to be going quite strong as Matt talks about the game’s core rules that help to simulate a lesser-known eastern front battle in World War I. Matt shows how the game provides an interesting challenge for both players despite the Russians’ disastrous invasion of East Prussia.

You also get scenarios with this issue and we’ve got two for MBT. Norm Lunde, who also reviews MBT in this issue, contributed a great big scenario based on a chapter from Mark H. Walker’s new Dark War series novel Retribution (of which there is an excerpt to be found in this issue). This one pits two troops (tanks, CFVs, infantry with AT) versus a whole whack of Soviet T-72s and T-80s with some Su-25s for good measure. The other MBT scenario is from me. I based this heavily on the premise of (West End Games, Jon Southard) Fire Team‘s Reconnaissance on the Nuremberg Highway. This is a straight up brawl between US infantry lodged in a small town with some Stinger missiles and a PIVADS versus a light Soviet recon platoon and some Hind helicopters. I wrote this one to help anyone who wanted to try out the helicopter rules in the game but didn’t want a huge scenario to start with. Of course, there are other scenarios in here for everything from Heroes of Normandie to good ol’ Air Superiority, the latter of which I wrote with tongue firmly planted in cheek.

There are tons more articles in this issue (a whopping 84 pages total) – so many that I can’t mention them all in one go (and hey, I wouldn’t want to spoil all the surprises, now would I?) but I urge you to check it out if you have the slightest interest in wargaming. I feel it was a top-notch effort from everyone involved. Here’s the link to get your copy.