On May 17, 1943 a lone bomber codenamed AJ-O piloted by Flt. Sgt. Bill Townsend was circling the dark skies over Germany awaiting orders. In the early morning hours, the aircrew finally received the message they were waiting for. Their target was the Ennepe Dam. In the fog and darkness, the pilot and navigator finally arrived near what they thought was the Ennepe Dam and circled around to pinpoint it on the ground. After making several passes to get the altitude and trajectory right, the custom-made dam-busting bomb codenamed “Upkeep” was finally dropped. With the other men of 617 already having made their bombing runs on the other dams in the Ruhr, Townsend decided to head home to England. 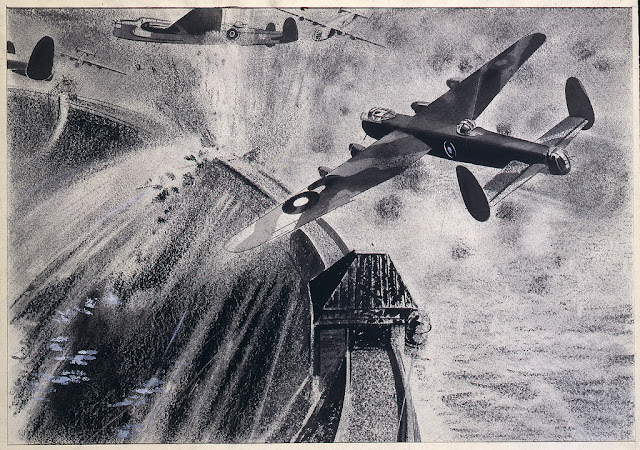 What really happened that night is still not really clear. Years later, eyewitnesses reported that another nearby dam (the Bever Dam) was attacked. Reports from the aircrew of what they had sighted on the ground are consistent with landmarks near the Bever Dam. In the fog and darkness and confusion of the night, it seems that Townsend may have mistakenly hit the wrong dam. 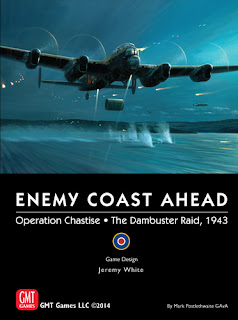 Scenario 5 from Enemy Coast Ahead is a beginner scenario that features a lone bomber attacking Ennepe Dam (the ambiguity is removed for the sake of newbies) in clear weather (also changed to help out the newbies) with a veteran aircrew. There is also the choice to take off the training wheels and have the scenario setup much closer to its historical realities (fog, green aircrew, uncertainty over which dam is being attacked).

As a new player of ECA, I found this scenario was an excellent starting scenario for me. It shows you how to procedurally go through each step of an attack run through to release and return to base. I’m providing this article to anyone who is curious about how this game plays. An an aside, you’ll have to forgive the unclipped counters – my kid decided it would be a gas to hide the counter clipper on his old man! 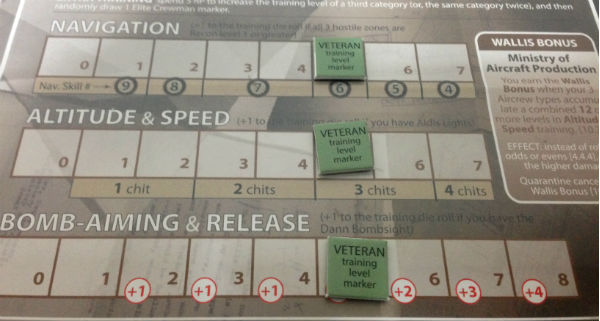 The biggest factor here working for us is the skill of the crew. For newbies, we get to start with a veteran crew, which gives significant bonuses to everything from navigation to altitude & speed as well as bomb-aiming. Green crews use the “2” spots for these tracks, which give far less of an advantage. 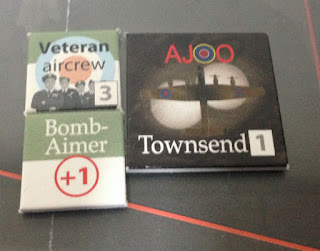 Our veteran aircrew is attached to AJ-O Lancaster, piloted by Townsend. Luckily, we have a good bomb-aimer, Sgt. C.E. Franklin, on board. 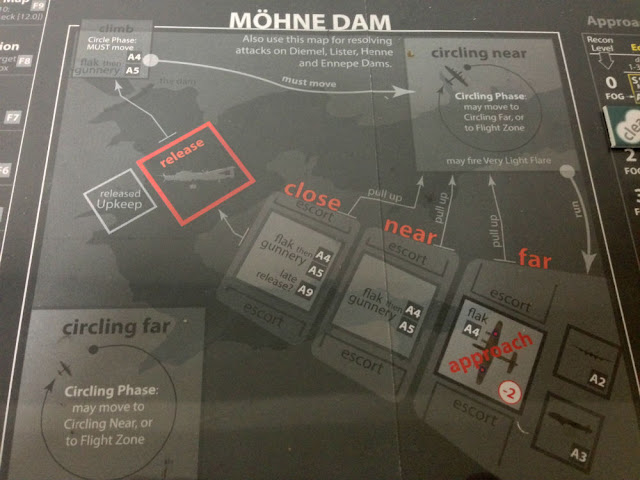 And here is the portion of the map we’ll be using. As you can see, each square of the map is meant to show the plane’s relation to the target dam. Our plane starts in the circling near box and then makes its run by going into the Far box. We can decide to release anywhere along the track – either close, near, or far. Once we decide to release Upkeep, the bomber goes into the release box and the release procedure commences. Finally, the bomber climbs and then circles near in order to find its bearings and head for home. This is a basic rundown of the attack part of each turn. 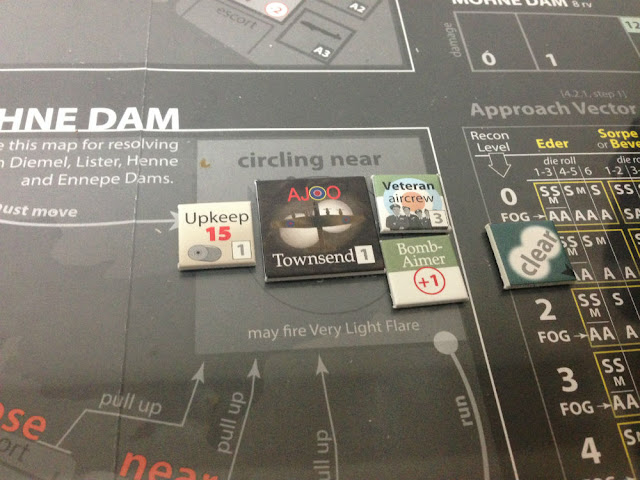 AJ-O starts off in the circling near box with its Upkeep marker. The reverse side usually has two numbers on it, representing possible damage done to the dam if the bomb hits it. We will have no idea what the reverse side of this marker says until the Morning Reconnaissance is performed in the morning.

AJ-O then makes its run and moves into the far box. We roll a six-sided die to determine how many chits we get to pull for altitude and speed. We roll a “1” and cross-reference this number with the chart to find that the number of chits we can pull for speed reduced by 2. Since our veteran crew can usually pull 3 chits, this means we can only pull one speed chit. We get to pull our usual number of altitude chits (3). 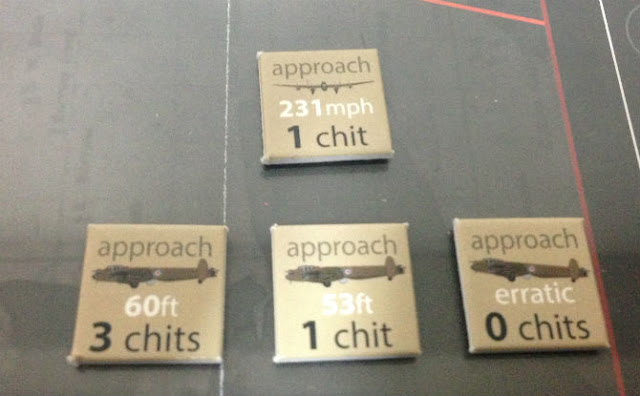 For speed, we are doing 231 mph and we can choose one of our three altitude chits. Of course, we want the one that will let us pull more chits later on for when we release so we pick the 60ft chit and put the other two altitude chits back in the cup.

I could opt to release now at this point. I would pull four chits from the cup and hope that the release bonuses they give me would be enough to help contribute to a successful release. However, I’ve decided that I want a really good number of chits. Since the dam has no defenses, there is nothing really stopping me from moving closer and trying for a better altitude so I go for it. I put the plane into the near box and exchange the 231mph speed chit for a 220mph speed chit. This will give me 3 chits to pull for the release instead of just 1. 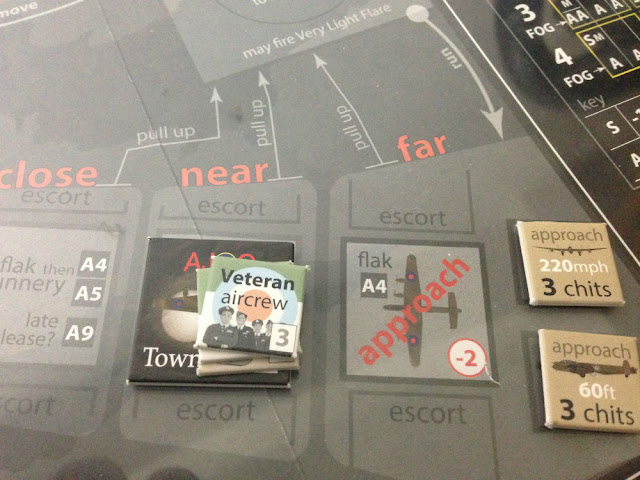 I decide that things are not going to get any better for my aircrew. We’re at pretty much the optimal altitude and speed so its bombs away! We try to release Upkeep and now we pull our 6 chits from the speed and altitude cups (3 chits each). 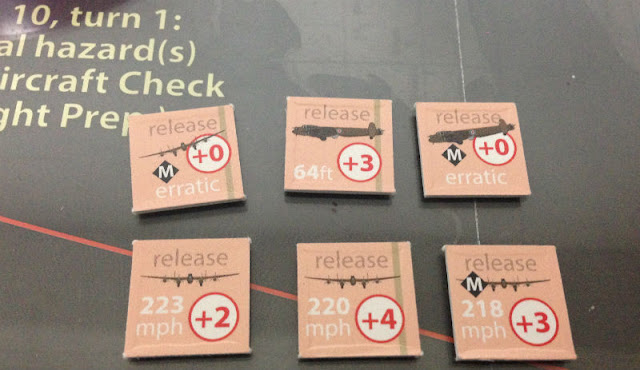 We take the best altitude and the best speed chit and get (did I pull four altitude and two release chits by mistake? – whoops, looks like it. Oh well.) one chit with a +4 and another with a +3. We roll 2d6, add our release modifiers, and crew skill modifiers. The die result is a 6 modified by release chits to a 13. We add +1 for our bomb aimer to make 14 and the crew skill level adds 2 to the release roll for a final tally of 16. Since we need 15 or greater for a successful release, our Upkeep is dropped and hits the dam.

There are no other planes circling to assess damage so we put the Upkeep marker face up on the dam’s damage track and we will turn it over later after the Morning Recon is performed.

In the meantime, it’s time to get the hell out of Dodge. AJ-O goes to the climb box. The visibility table is consulted after rolling a “5” on 2d6 and we get fog. The plane goes into the Circling Near box and we roll to see if there are any German nightfighters spotted. Lucky for us, we roll a “10” and there are none nearby. AJ-O attempts to return to base. We roll an 8 and the plane lands safely at Scampton just as the sun begins to rise over England. 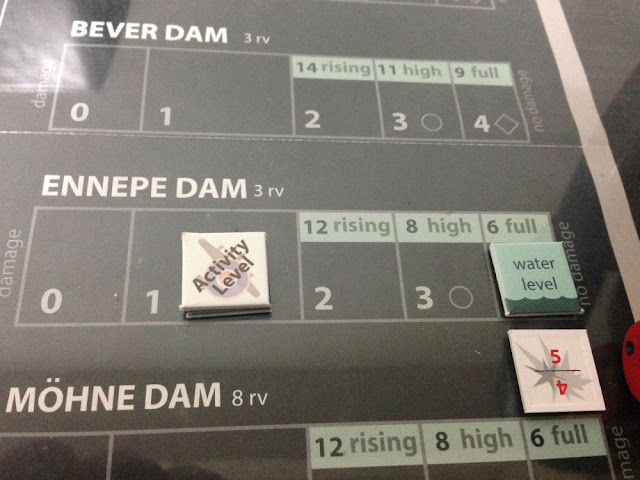 It is time to see what kind of damage we have done to Ennepe Dam. We flip over our Upkeep counter to find it has a 5 on one end and a 4 on the other. If I roll even on a d6, the dam takes the four damage. If odd, it takes 5 damage.

I roll a d6 and get a “2”. Ennepe Dam is heavily damaged but not breached.

According to the mission result in the scenario, we get a result of “good show”. Townsend is awarded the DSO and the confusion over what really happened that night remains long after the war as it did in real life.

It is incredibly hard to breach the dams, just as it was in real life. I have played through most of the scenarios several times and can’t ever remember scoring a breach – though I have come close. Sometimes you can have the best rolls on the attack and release but the Upkeep just doesn’t have enough oomf to get the job done. The scenarios with multiple planes are a bit more interesting as each crew takes its run at the dam and hopes for the best. Although I haven’t yet tried the full campaign yet, I suspect this is where the game really shines with more decisions to make early on that ripple down through to the actual attack run.