Enemy Coast Ahead (GMT, 2014) is a solitaire game designed by Jeremy White that simulates the RAF no. 617 Squadron’s May 1943 raids on German dams in the Ruhr. This game held a special interest for me because as a kid, I read Paul Brickhill’s book and I remember being fascinated by the technical problems of the bomb design, the raid, and marshalling together the right men and training in secret to do something that had never ever been done before. 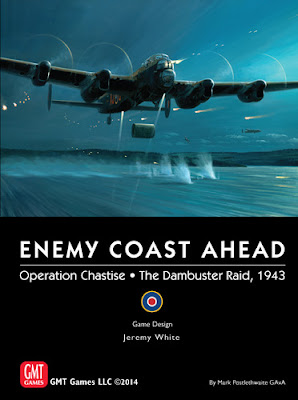 Reading up on it now from the vantage of age, I was surprised at how ineffectual the whole thing was on the German war effort. The civilian losses and the POW deaths that resulted from the bombings are pretty appalling too. In the end, it seems the main effect of the raids was to boost British morale, which would have been much needed in those dark days. At the time, however, the raid was seen as a chance to strike a serious blow to Germany’s war-making capabilities as its industries in the Ruhr industrial heartland would be rendered destroyed or inoperative for months or even years.

One interesting aspect of the game is how the reality of today’s sensitivities can often clash with the historical realities of the past. Yes, I’m talking about the dog. For those of you not in the know, the men of 617 Squadron had a dog who served as their mascot. Its name was a racial slur. The dog’s name is mentioned in the rules one time and the dog has a counter but the text on the counter reads “Jinx”. This is because the dog died shortly before the raids and its death was kept a secret from the aircrews so they wouldn’t see this as a bad omen.

If the Jinx counter is pulled prior to the raids, the news of the dog’s death spreads throughout the squadron and negatively modifies die roll result selection. Although there are a few people who take the inclusion of the dog’s name in the rules as objectionable, most reasonable people have understood that using this kind of terminology is an unfortunate but real part of history. Jeremy White has chimed in on this subject many times and his explanations and justifications for keeping the dog in the game are sound, sensitive, and reasonable. I think it was the right choice.

Moving beyond all that, the game is a real pleasure to play. There are no hexes or maps in the game. There are a series of playing aids with sequential rules that tell you what your bombers can choose to do next. Outcomes are determined by chit pulls and die rolls. There are 10 scenarios in the game, the last of which is a full campaign game that involves selecting, training, and planning the missions before carrying them out. Everything is played out on a paper mat and although that may not sound exciting, it works very well for the kind of game this is. 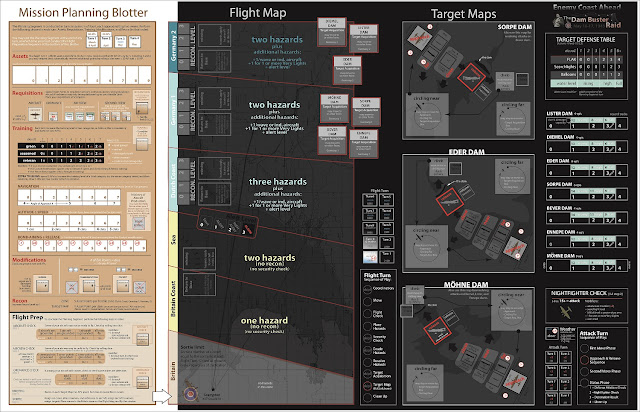 This is very much a game of risk management and opting for the least unpalatable option out of the many available bad ones. Some dilemmas you might encounter during the game

Here is an extremely rough account of what the game can be like – I have intentionally skipped out on a few important details for the sake of brevity:

A typical beginner scenario mission goes through turns, each of which are broken down into phases. You start off circling the target then going to the Run phase. As your bomber gets closer to the dam, you pull chits to check your altitude and speed. Based on this, you can decide to release your “Upkeep” (codename for your dambusting bomb) or continue with the approach and release nearer to the dam, adjusting either your current speed or altitude. In some cases, you’ll get shot at by flak and have to deal with balloons. Meanwhile, your gunners will have the chance to shoot at dam defenses to make your lives a bit easier.

When you decide to release, you pull a number of speed and altitude chits and check their release modifiers then add these to a 2d6 die roll. Other modifiers to the die roll are made based on crew training, bomber damage, and a host of factors. If the modified die roll result is above a certain number, your Upkeep successfully releases and damages the dam. If it’s below a certain number, you either miss or end up with the bomb damaging your plane upon release. As you turn away from the dam, you have to check for German nightfighters before heading for home.

If another bomber is on hand to assess the damage, you turn over your Upkeep chit and it tells you what kind of damage it does. If not, you turn over all the Upkeep markers on a particular dam at the same time when Morning Recon is performed. In either case, you roll a die for each Upkeep marker and it may add or subtract a damage point to the dam. If the dam accumulates enough damage, it is breached and the mission is a terrific success. Each scenario gives a very prosaic account of the result of the mission and how it affects your men. This is by far one of the coolest things I have seen in a game.

If you don’t like these kinds of games where the system is nakedly out there for you to sit down and work with, you probably won’t like this game. It is a very procedural game with “pull this chit at this time” kind of flow to it.

However, if you can live with a very procedural game approach and let it go to work on your imagination, you’ll build up a tense story in your head of what’s happening as your bomber crews die in the darkness or arrive back home as heroes. I would say it would depend a lot on whether or not you are familiar with and enjoy any of the source material that the game is based on. If you’re like me and you grew up with the story, you’ll fall in love with it as soon as you open the box.