It’s turn 7 of my latest game of Gulf Strike scenario 1 and Iran is doing terribly. It has taken us seven horrible turns of mucking around with supply problems to get down to the capital of Saudi Arabia and do battle with the Saudi forces protecting the capital. Along the east coast, a handful of Iranian units attempt to break the back of the lonesome small group of elite defenders protecting the Al Hufuh airbase from attack. Without supply or reinforcement, it seems they won’t last much longer.

On the other hand, the United States is now activated this turn and can start to get some serious units on to the table.

At the beginning of the turn, we roll for a Random Political Event and get nothing at all. So we go ahead to the Global Military Stage and the US units start showing up at the bottom of the Strategic Map.

I put a US SSN in the waters between Madagascar and the African coastline. Meanwhile, the USS Enterprise CVN-65 is placed to the east with a Marine amphibious ship with some of Uncle Sam’s Misguided Children aboard. Now the US has a toehold on the way to achieving naval and air parity with the USSR in the region.

The Saudis keep their elite Mechanized Brigade northwest of the capital in reserve. I put the Iranian 11th Armored Brigade in reserve near Al Hufuh airbase just in case I need to chase down the Saudi paratroopers later in the turn. Two of my truck units dump off two brigades from the 8th infantry division just north of another brigade from the mighty 8th sitting adjacent to the Saudi 1st Mech Brigade. I really want to recombine these brigades into a single infantry division but I would have to perform a withdrawal of the brigade sitting next to the Saudis and that would result in a hit. I might do it anyways later in the turn.

One of the trucks rushes over to hex 0755 to pick up an air defense unit to transport up to the big weak link in our supply chain in 0947.

Supplies are a huge problem for the Iranians this turn. I started off with 10 supply points this turn after spending with abandon last turn. After gaining 20 supply points to reach 30, I realize that I will have to pick my fights carefully this turn and then go for a bigger push next turn with more supplies. I choose my key objectives carefully. I really want Al Hufuh this turn, so I will spend the 7 SPs needed for a hasty attack (armored division and artillery brigade) on the airbase.

I would like to push at the center of the Saudi lines near Riyadh. This is their weakest point and my strongest spot. They have an armored brigade with a strength of 3 in hasty defense and rough terrain for 10 total combat value. I have two Iranian armored divisions (strength 5 each) with an artillery brigade in hasty assault formation adjacent to them for a strength of 20 and a die roll modifier of +2.

Since the Americans have activated this turn, they get to do some stuff. The Enterprise and the Marine amphibious landing ship at the bottom of the strategic map move up towards Diego Garcia, expending both Naval Activations allotted for the First Action Stage.

We have a pair of B-52 bombers and it would be a shame not to use them this turn. They pound the Iranian base in Basra for 1 hit and an F-5 Tiger is assigned a damage point. The Iranians got off pretty light, all things considered.

The First Action Stage Assault Segment comes around and the Iranians decline to put air support up to help their troops. Not only would the air strikes themselves drain supplies but the Saudis have poured all their own air into Intercept mode so going this route would entail clearing the air of Saudi fighters beforehand.

As promised, the Iranian 4th and 5th Armored Divisions deliver a beating against the Saudi 2nd Armored Brigade. Facing total annihilation, the brigade takes one hit and shakes off the other with a one-hex retreat south into 0660. Iranian 5th Armored pursues into 0659 and prepares a coup de grace in the next Action Stage. The road to Riyadh is now cleared for the 4th Armored Division.

In a classic case of overkill, the Iranians attack Al Hufuh airbase with an armored division and an artillery brigade. Rolling on the 3-1 column with a +2 die roll modifier against a reduced elite brigade of Saudi paratroopers, the die roll comes up 8 modified to 10. Wow! It isn’t even close. 4 hits get assigned to the Saudis.

The elite paratroopers are eliminated with the first hit. Three hits left to assign. The air defense unit in the Saudi base hex takes them and is eliminated. The base itself is just barely hanging on. A truck unit in the same hex. It doesn’t matter – support units can’t combine their defense strengths so things are looking real bad for the Saudis here soon, especially with an Iranian armored brigade just to the north sitting in reserve mode. 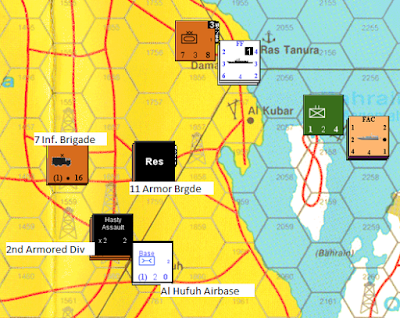 Things look dire for the Saudis. The way to Riyadh is open and one of their airbases is just about to fall. However, in this assault segment, the Americans can try to do something. They gather three detachments from the 5th Special Forces Group and drop them into hex 0947, where the Iranians have foolishly left a supply depot unguarded!

We roll for the raid on the depot and get an “8”, modified to 13 for attacking a Supply Depot on its own. The result is 3 hits and the depot is utterly destroyed. Unfortunately, this was the main node for the Iranian army down in Saudi Arabia so the whole invasion force is now out of supply! Oh man.

Let’s file all this under lessons learned:

1.) Have redundant supply paths for your units if possible so that if one depot is taken out, at least some of your guys will remain in supply and functioning.

2.) Don’t leave supply depots alone in a hex. Ever. Always have a unit with them, even if it’s a lowly infantry brigade.

3.) I probably could have avoided this headache from the start by putting an airbase in 1046 instead of in Kuwait City. Then put a supply depot there with an infantry brigade and air defense (and an F-14 Tomcat) to firm it up a bit. Suddenly you have a pretty defensible supply depot serving as your main supply mode from Basra down into northern Saudi Arabia.

In the Second Action Stage, the Iranians get 3 NMPs while the US/Gulf Council gets zero.

In the Movement Phase, the Iranian player can pretty much only look helplessly on the map and try to figure out how to rebuild the whole affair from scratch next turn. The first order of business is trying to secure an airfield where a supply depot can be safely stored and used as a relay to help the Iranian army down south in Saudi Arabia. The C-130 in Tehran is loaded up with Iranian Spec. Forces troops from the 55th Brigade and they are unloaded in hex 1046 in Kuwait. We’ll use a CH-47 to transport the airbase from Khark Island next turn into 1046 and get a supply depot set up there as quickly as possible. 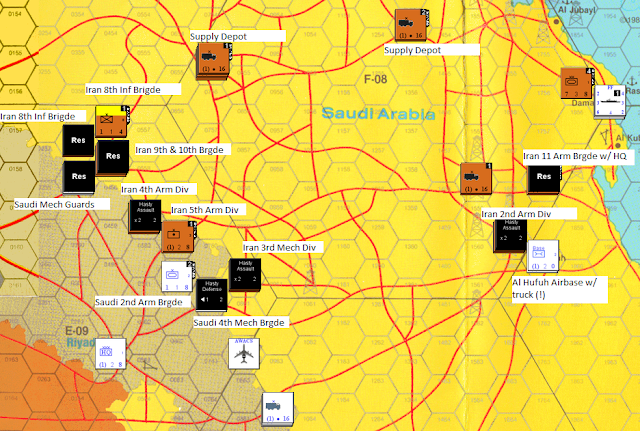 During the End Stage, 20 hits total are assigned to the out of supply Iranian army sitting down in Saudi Arabia. Initiative will go over to the US player next turn. Wow. This is pretty embarassing but it’s the kind of experience you never forget that starts to teach you how to play the game properly. Ignore the importance of supply at your own peril and watch your enemy have a field day.

Iran purchases a supply depot and places it in Tehran for transport next turn. The Saudis lose 4 supply points to Yemeni guerillas operating on the border. What a mess!