In the first five turns of Gulf Strike‘s first scenario, I’ve led the Iranian military on a bumbling mess of a military adventure through Kuwait and down into Saudi Arabia. As the major powers gear up to join the war, I’ve got to admit that the Iranians have probably already lost it. Lack of planning has led to supply shortages and almost no air cover for my advancing troops. It’s only because the Gulf Council states are poorly-armed that I have been able to get this far. This turn we see if things can come together again for Iran as it tries to take on the Saudi military for control of Riyadh.

We start off the turn with no political events. The Global Military Phase begins and the US military uses a C-5 to transport in an airbase, 5th Special Forces Group, and the RDF HQ. The Americans also get 3 x F-4 Phantom units.

I wasn’t exactly sure what to do with all this new stuff. If I put the airbase up in Oman, it’s very vulnerable to Soviet air strikes from their surrounding bases in the region. Seems like I should be putting this base in Somalia with the other US airbase I placed there in turn 3. Since that base already has a pair of F-15s on Intercept, I can just have the three F-4 Phantoms on Offensive mode. I can use these guys as offense to hit at the Soviet navy surface ships if they get near the coast of Africa. They can also hit out at any foolish attempts by the Soviet player to plunk down a base or two in Yemen.

Time to update our Supply Points:

As the Iranian player, I absolutely positively need to do the following this turn:

1. Get a supply depot down into Saudi Arabia to support my left flank.
2. Capture an airfield so I can get an airbase down there and get some attack choppers in range of enemy units
3. Break the back of the Saudi defense around Riyadh.

So let’s go through this step-by-step then shall we?

Objective One: Get a supply depot down into Saudi Arabia. 1354 seems like the best spot for this. The weakest link in my supply chain right now is the 18 or a 20 MP distance between the supply depot in 0947 and the one down south in 0755. It is literally two interdiction missions away from cutting off the entire Iranian army sitting in Saudi Arabia (hitting 0754 and 0753 would do it). 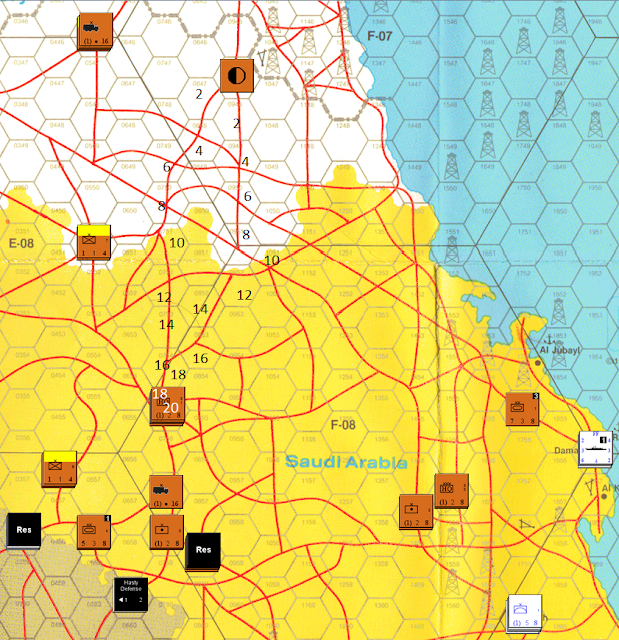 By the way, this is what I find to be the biggest challenge of Gulf Strike. The easy part is the fighting. The most difficult part is establishing supply lines that are long enough to keep your forces on the offense but short enough so they aren’t vulnerable. Trying to protect your supply lines without adequate air basing is a fool’s errand.

Now as luck would have it, there’s a CH-47 all fueled up in Ahvaz with a supply depot loaded on. The only problem is that it’s bound to get detected on the way down by Saudi AWACS aircraft and if it’s intercepted, I could lose the plane and the depot, which would be a very serious setback for the Iranians. You may say that I should just send an escort with it and you would be right — except that I’ve got no planes on Offensive mode assigned to that base.

So it looks like I’ll need to clear the air of Saudi interceptors or AWACS before I can send my bird down. Here we go:

The Iranians send down an F-4 Phantom from Basra. Miraculously, it gets within six hexes of the Saudi AWACS before it is detected. The F-15 from Riyadh scrambles and intercepts, scoring one hit on the Phantom, which RTBs.

Al Hufuh scrambles an F-15 with 2 hits to intercept a second F-4 unit from Basra. This time, no one scores a hit.

Now the Saudis have a single plane left in Riyadh on Offensive mode. It’s a measly little Lightning (anti-air strength of 3) so it probably couldn’t even manage a shootdown of a CH-47. But there is no sense taking chances.

I send an F-5 down from Kuwait and the Lightning gets sent up to attack the incoming enemy plane. Wow, the Lightning scores 2 hits on the Iranian F-5 and takes no hits in return! The F-5 unit is destroyed.

However, the way is now clear for the CH-47 to make it down to its destination hex with exactly two MPs to spare. It’s just enough to unload the supply depot. The one drawback to this is that the helo must stay there until next turn.

The 11th Armored Brigade captures the airfield at 1758. The base at An Nas Riyan is packed up and moved south by transport truck.  The 1st Armored Division goes into Reconstitution formation. I’m hoping to freshen it up by the time I roll east towards the UAE.

Around Riyadh, the 4th and 5th Armored Divisions go for an attack on 2nd Saudi Armored Brigade. It’s probably overkill but hey, it should punch a nice hole right in the middle of the Saudi lines. I shift a couple of infantry brigades over on the right flank just to protect my supply lines in case the Saudis use their Mechanized Guards Brigade to do anything sneaky.

Iranian supply lines are still vulnerable at this point but nowhere near as badly as last turn. Having the Al Hufuh airbase in my ZOC means that neither of the two F-5s stationed there can launch. However, Riyadh airbase has a single F-5 unit and Qatar has a Mirage on Offense mode that could ruin my day by conducting deep strike interdiction missions near Kuwait to put large sections of my army out of supply. I throw several F-4s at Riyadh and manage one very successful mission that ends up destroying the airbase (it already had a single hit from last turn).

Just for the heck of it, I try for the Qatari airbase and end up scoring a hit but the rest of air missions return without having had any luck. Oh well. I’ll take it.

That bit of excess with the Qataris has cost me my close air support.

In the assault phase, the Saudi 2nd Armored Brigade takes 1 hit but doesn’t opt to retreat because this would leave the door wide open to Riyadh.

Over near Al Hufuh, the paratroopers at the base are out of supply, halving their combat strength to 1. Luckily, they are defending in a town so their strength is doubled to 2. The Iranian armored division would normally be attacking at 6 to 1 (combat strength six doubled to twelve due to hasty assault). However, these are elite paratroopers that we are facing so we’re looking at the 3 to 1 column instead. The Iranians score a single hit and, like their brethren to the west, the Saudis refuse to budge an inch backwards so they bravely suffer the combat hit.

In the Second Action Stage, the 3rd Mechanized Infantry Division is brought out of reserve by the Iranian player. It marches directly south and goes to Hasty Assault formation to attack the Saudi 4th Mechanized Brigade. Both units take a hit in the ensuing combat.

The rest of the turn continues without much fanfare. The Qataris and UAE send their Mirage jets to try and hit my supply depot at 0947. The Qatari jet manages a nice bombing run, scoring two hits but the UAE Mirage fails to score any hits. It is probably time for the Iranians to get an air defense unit back up there.

The Saudis move their truck unit to the Supply Depot in 0964 but it will probably be too late to do much to help Al Hufuh next turn. The Saudis get nailed for another 4 Supply Points loss in the End Turn Stage because of the border conflict with the Yemenis. The elite Saudi paratroopers protecting Al Hufuh are out of supply, suffer a hit and are flipped to their reduced side. 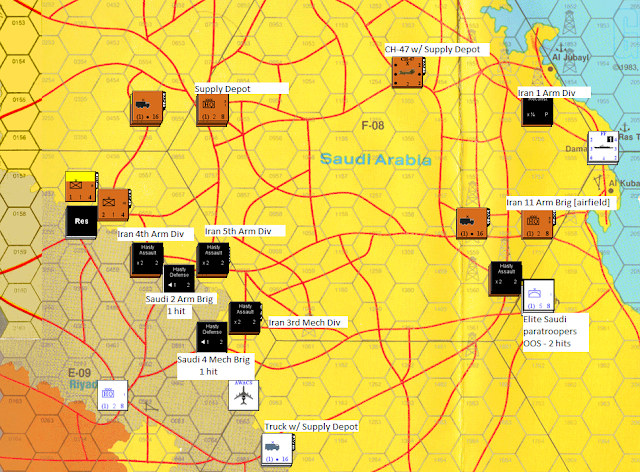 Next turn is turn 7 and the Americans activate. Hoo boy!