The first four turns of Gulf Strike scenario 1 were marked by poor planning, bad luck, and lots of hard lessons learned. Using the few remaining brain cells in my head, I had barely managed to get the Iranian army close enough to within striking distance of Riyadh. Turn 5 would be the time for the Iranian Air Force to serve as a beacon of light – the mighty protector of the army as it trundled down the peninsula fueled by dreams of fanatics. This would be the turn for: 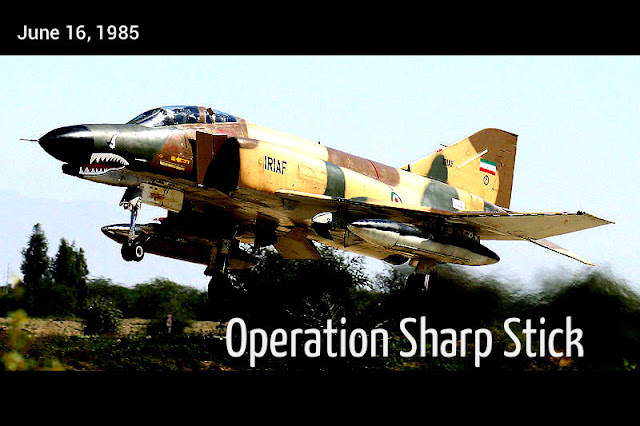 At this point, my guys were already looking worn out just from the effort required to travel south in any semblance of organized fashion and within reach of my supply depots. Thankfully, the Gulf Council states were generous enough not to pound the heck out of the Saudi highways with interdiction missions so the supply chain managed to stay intact.  On the other hand, the Iranians were unable to pull off any dazzling air victories of note. Even the navy was having trouble hitting enemy ships.

We roll a “10” at the start of the turn and we get a random political event. A “4” is rolled on the table. “Democratic Yemen guerrillas become active on the Saudi border.” Oh no! That is absolutely the worst thing that could happen for the Saudis right now.

The fallout of this is that the Saudis need to send a brigade assault unit to the border for the remainder of the game turn or they lose 4 supply points per turn that they don’t do it.

Looking over my options, I don’t think the Saudis could send any of the defenders from around Riyadh. They are stretched thin enough as it is. I could send the elite paratroopers based at Al Hufuh airbase and try to transport the remains of the airbase towards Riyadh. However, I would be leaving the road completely open to UAE and Qatar by doing so. I think I need those paratroopers to be a speed bump so I’ll leave them there. With 42 SP for the Saudis this turn, I’ll probably be okay with losing the 4 extra SP for a turn or two.

Supply Points are added and we get:

During the Unit Assignment Stage, it all comes crashing down on me. I should have foreseen the problem with Iranian air not being able to effectively arrive over Saudi targets so far south.  All of those ground combats will be out of range of everything except my F-4 Phantoms. I should have been shuffling my bases around earlier in anticipation of all this. I can see three airfields where I could have plunked down an airbase and kept my AH-1s sitting there ready to help out in the coming battle. I should also be hitting the hell out of the Saudi airbases because those F-15s are really nasty when they want to intercept my air cover.
I can get a couple of armored and mech divisions in movement to contact formation to near a couple of Saudi ground units this turn. I just can’t support them in any way whatsoever. I’ll have to spend turn 5 shuffling guys as best as I can to get them prepared to fight at their full capability next turn. My divisions trundling along on the east coast highway can pretty much steamroll over whatever they want and they should be able to capture the airfield near Al Kubar this turn, which should help.

Or maybe not. As it turns out, lack of airbases is not my only problem. I simply don’t have the supply range available to push my units that far down the coast. Not only that but I have failed to purchase a supply depot that could be transported down into Saudi Arabia and connected into the network. It looks like my sweeping vision for Iranian supremacy of the Middle East is turning into a great big joke. I’m can almost hear those guys over at the Pentagon laughing.  I send my C-130 up to Ahvaz where I’ll spend 4 SP at the end of the turn creating a supply depot. In the meantime, I’ve tried to sort out the airbase range problem by sending up a truck from Kuwait City to An Nas Riyan. Next turn, it will be loaded up and sent down south.

The 1st Armored Division on the coast will have to move to 1755, switch to MC and prepare to take Al Kubar next turn after plunking down a Supply Depot in 1452. Having an airbase there would be very helpful in taking on Qatar, Bahrain, and UAE after Riyadh falls. The only problem is that the airbase would be right on the coast and the navies of three countries are within easy access of bombarding it.

By the middle of the First Action Stage Initiative Movement Phase, I have moved my divisions quickly down towards their jumping off points for the coming attack next turn. The only problem is that my left flank on the Saudi coast is stretching its supply lines to the maximum 20 MPs and this will no doubt become a liability, a prime target for the enemy airplanes.

Here’s a look at the supply situation after moving Iranian ground forces in the First Action Stage. The distance from supply depot to target units is marked. Note how thinly stretched the Iranian units are near the coast. Any more than 20 MP from a supply depot and my units are out of supply. Simply interdicting 0955 and 0855, for example, will take two Iranian combat units (11th Armored Brigade in 1557 and 1st Armored Division in 1755) out of the supply network. Interdicting 0856 on top of this will put the 2nd Iranian Armored Division in 1457 out of supply as well. 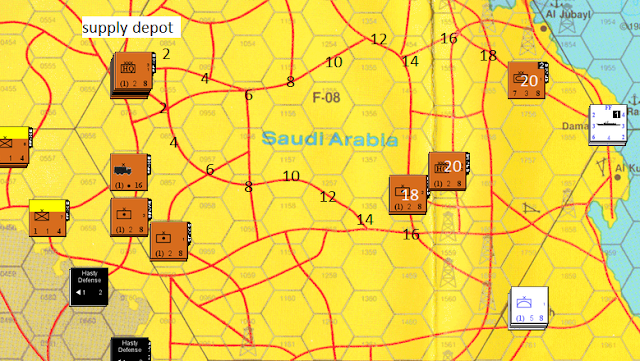 Since the Gulf Council states have four aircraft on Offensive standby that could launch interdiction missions, this threat is very real and cannot be ignored. Three of these aircraft are Saudi F-5s (two at Al Hufuh and one at Riyadh airbase) and one UAE Mirage.

In order to keep my ground units safe and in supply, I’ll need to conduct air operations this turn with the goal of grounding as many enemy strike aircraft as possible.

To that end, the Iranians begin Operation Sharp Stick. The Iranian air force will launch planes in an attempt to:

I decide to send out a pair of fighters on Air Superiority missions from the airbase at Basra.They head straight south and are almost immediately detected by the Saudi AWACS after takeoff. An F-15 from Al Hufuh is scrambled to intercept. There is a short but remarkable air battle over 0554 where the F-15 takes two hits while the Iranian F-5 and F-4 are unscathed.

Another air mission is sent out on air superiority to lure the Saudi planes at Riyadh. This time another F-4 from Basra gets to within 6 operational hexes of the Saudi AWACS plane before it is detected. An F-15 from Riyadh intercepts. Neither plane manages a hit in the ensuing air melee. The Saudis still have a Lightning on Intercept at Riyadh.

I spend 4 SP to conduct two interdiction missions on the highway between Al Hufuh airbase and its supply depot. Neither of the F-5s on Offensive mode at the airbase may launch their missions. I need to take care of one more enemy plane to keep my guys secure from enemy interdiction missions. I decide to try and hit Riyadh airbase with my 3 remaining Phantoms. One flight leaves from Bushehr airbase and is intercepted by a Lightning, which fails to score any hits. The Phantom arrives over Riyadh airbase but the bombing mission fails. The second bombing mission from Ganeveh also fails to hits the base.  The third run scores a hit and damages the F-5 fighter in Offensive mode based in Riyadh. It won’t be enough.

During the First Reaction Segment, the Saudis tuck in the 4th Mech Infantry Brigade so it will have the advantage of defending in rough terrain instead of desert terrain. The Gulf Council states launch their air against the Iranian supply lines. 0855 and 0955 are interdicted, knocking the 1st Iranian Armored Division and 11th Armored Brigade out of supply.

The end of the turn sees the Iranian 4th Armored Division use its Reserve movement to sweep southwest to link up with an infantry brigade in 0558. The Iranian right flank near Riyadh should now be powerful enough to take on the Saudi Mechanized Guards Brigade or the Saudi 2nd Armored Brigade in 0659. Despite the Iranian setbacks this turn, the Saudis are in real trouble right now and facing a very dangerous situation.

The end of the turn rolls around and the Iranian division and brigade both suffer a hit from being out of supply. The Saudis lose four supply points for their failure to squelch the border violence with Yemen. We now look ahead to turn 6 where the Iranians will have hopefully learned enough lessons to be able to bring its force to bear on the Saudis. Meanwhile, the Americans gear up to intervene in the conflict. Somewhere in the Indian Ocean, a Soviet cruiser trails an American carrier group…