I really enjoy Omega Games’ Ranger. It’s a simple game but manages to weave a tense narrative for the player as you send your guys deep into the jungles behind enemy lines and hope they come out alive. The best mission you can hope for is one where you are never detected by the enemy and your squad or platoon returns safely to base.

It seems a bit odd to hope for nothing to happen but it’s what keeps the game fresh over the course of so many plays. Some days, you will play a mission without so much as a hitch and other times you will experience complete and utter chaotic failure. Occasionally, it doesn’t even matter what choices you make, you end up getting screwed anyways – much like real life. You follow the advice given in the tactics book to the best of your ability and just hope it all works out.

In this mission, my squad was assigned to locate and help extract a downed special forces helicopter deep in the jungle. My men were to fast-rope down into a nearby clearing, make their way to an approximate location on the map, find the helo and then move to extraction. 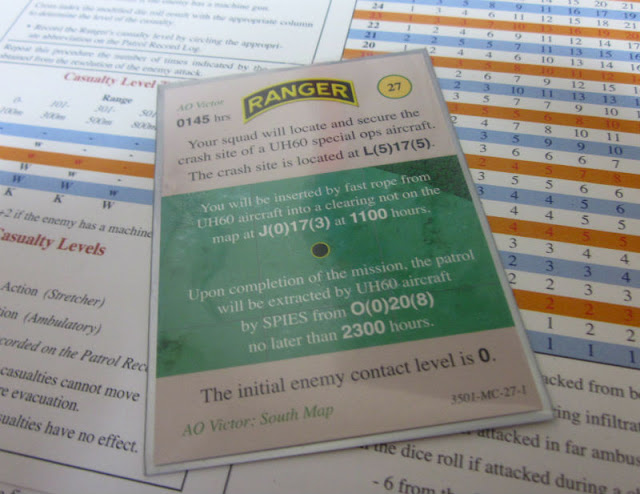 They would be using SPIES harnesses to get out of Dodge. This all sounded very James Bond to me but I was a bit nervous sending my guys in by helicopter to get a helicopter that was already shot down, having recalled the events of October, 1993 in Mogadishu.

I plotted the squad’s primary and alternate routes on the map provided. The insertion would be at 1100 and though we weren’t that far from the crash site, we didn’t have time to play around. Extraction would be at exactly 2300 and we would be moving through swamp terrain for most of the time. It would be slow-going at the best of times.
I plot zig-zag routes to keep us from getting ambushed on the primary route, changing course every 500 meters.  I plot 10 rally points evenly spaced apart. I usually plot 1000 meters before a course change on the alternate route, mostly because if I’m using the alt-route, something has gone wrong and it is time to abort and get to the extraction point as quickly as possible. Here, I plot 5 rally points for the same reasons.
There is one significant danger spot here – the river crossing on the way to the extraction point. The squad will definitely need to rehearse this and then bring along lots of rope to get us across. Luckily, I roll high for the number of available rehearsals and the squad has enough time after the briefing to rehearse the crossing along with the insertion and extraction.
I sketch out how the actions at the objective will look. There are two men each (a rifleman and grenadier) on left and right flank security. The MG team (M249 gunner and asst. gunner) are parked at the back for rear security.  A three-man recon team will be used to recon the objective.
The squad gets inserted as planned and wastes no time in heading south towards its objective, zig-zagging through the jungle and then the swamp along its planned primary route. The going is surprisingly fast. At 1245, the Objective Rally Point is found and the teams are released towards the objective. The recon team goes out for 30 minutes and comes back empty-handed. Despite their efforts, the helo crash site is not found. The squad leader elects to keep searching so they head out again and, after 2 hours of searching, they finally discover the whereabouts of the UH-60.
After securing the site, a CH-47 comes in and the team fastens ropes to the helicopter and it is lifted out of the swamp. By the time all is said and done, the team has moved out and it is already 1500. There is lots of ground to cover before we make it to the extraction point. Concerned that I will not have enough time to reach the extraction site while using traveling overwatch, I decide that it is simply too risky to go to a file formation, which, although faster, would be a deathtrap if we get caught in an ambush.
As luck would have it, the squad barely makes it to the river before the last bit of daylight is extinguished. We manage a daylight river crossing that goes smoothly thanks to the use of ropes and rehearsal earlier in the day.  Night falls as the squad finds the rally point on the south side of the river. 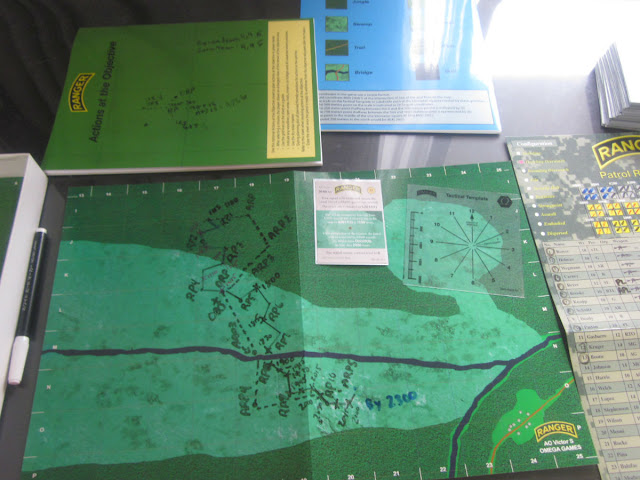 The terrain is very tough-going as we approach the extraction point. Luckily, we make it to the extraction point with plenty of time to spare. At 2100, the radioman contacts the base and the squad waits patiently for extraction. 30 tense minutes later, the extraction helicopter comes and the team uses its SPIES gear to leave the jungle behind. Another mission is accomplished.
This is one of those missions where everything just fell into place. There were no real SNAFUs, possibly due to the fact the team rehearsed everything beforehand. Maybe it was the fact the terrain was so easy and we got out of the area with time to spare. One thing that I’m always keenly aware of when I play Ranger is that the longer you hang around out in the jungle or whatever, the higher the probability that something is going to go wrong.

I could see that some people might say Ranger is a bit boring at times but for others (like me), the tension is a huge part of the game. Combat is so deadly and over so quickly in the game that you really don’t want any part of it unless it’s part of your mission and you have overwhelming fire superiority and a good plan to boot. For me, the missions like this where everything goes right just add to the flavor of this game over many plays as you witness quiet successes and spectacular failures.