In 1988, TSR published “The Hunt for Red October”, a boardgame based on Tom Clancy’s 1984 debut novel of the same name.

The book was a tense thriller set in the late Cold War period. It focused on a Soviet submarine captain’s attempts to defect to the United States. Clancy clearly showed a talent for explaining the complex topic of submarine detection and warfare in layman’s terms without condescending to the reader.

The book not only spawned a boardgame, but also a computer game, as well as a movie starring the irrepressible Sean Connery as Captain Ramius and Alec Baldwin cast as the main protagonist, CIA analyst Jack Ryan. Clancy went on to write dozens of novels and several non-fiction books dealing with the military before his death in 2013. All of that – the movies, games, and TV series – began with this one novel. So looking at this boardgame as one of the starting pieces of Tom Clancy’s hugely successful career feels a bit odd. As a fan of the novel and the movie, I was always curious about how the boardgame fit into the overall Clancy legacy. Was it an early cash-in or was there some quality here that rubbed off from having the Tom Clancy name attached to it? I wasn’t sure.

The game comes with several high quality components for its time. There’s a 29 page rulebook filled with examples of play, diagrams, and flavorful descriptions of various ships and aircraft of both the NATO and Warsaw Pact. The book has 8 scenarios ranging from short submarine duels to all-out battles of World War III with carriers, fighter planes, subs, and surface ships like frigates and destroyers. Of course, scenario 2 provides the players with the chance to recreate Captain Ramius’ defection as depicted in the novel. One player plays the role of Ramius and secretly plots Red October’s path while the other player uses the entire Soviet navy to try and track him down and prevent him from reaching the Americans.

The board is beautiful and features a map of the North Atlantic Ocean and the Norwegian Sea between North America and Europe. The SOSUS lines are indicated on the map with NATO symbols. Shallow and deep waters are colored differently and airbases for both sides are clearly shown. In addition to the map, there aretwo task force boards (one for each player) so as to avoid crowding on the main playing surface. There is also a ‘battle board’ that allows players to place their units according to when they will attack (first or second) in the battle phase and where each piece falls in the composition of the task force (ASW, anti-air, etc.). I was surprised by how good these looked and how large they were. For its time, this game had some very nice components. 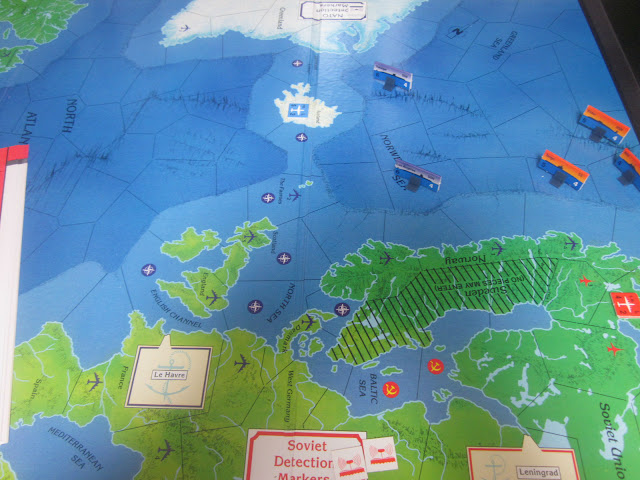 The pieces of the game include the naval and air units. The naval units are two-sided. On one side is the name and class of the ship with its detection and attack ratings. On the other is simply the NATO or Warsaw Pact symbol so as to keep the enemy player in the dark about what exactly is out there until successfully detecting the enemy. The game comes with two 10-sided die and two six-sided die.

Learning the game required a bit of head-scratching due to the poor rules organization. It’s clear though that this was a good attempt at building a fun family game that tries to model the very basics of naval warfare. For those looking for anything more than beer and pretzels depth, this game will be a disappointment. Anyone who just likes the theme of the game and an afternoon of moving around cardboard submarines and ships is probably going to have a good time.

The air movement phase comes next. If you want to launch your ASW aircraft or conduct an air raid against an enemy force, this is your chance to get those aircraft on to the board. In the final step, the battle phase, the players get another chance to play detection markers and fight it out again if they so wish. As you can see, much of the game is spent moving, rolling dice, and playing detection markers.

It’s deceptively simple but somehow it ends up being more than just the sum of its parts. I’m not sure if its the branding or the optional rules that allow for a more nuanced game (these optional rules include SSM missile defense, anti-aircraft doctrine, decoy submarines, SAMs and jamming to name a few). Judging from the rulebook and the amount of effort that went into designing a simple but fun and playable game of modern naval combat, I don’t get the impression that this was a weak cash-in but rather a nicely put together board game that was primarily aimed at the dad-son crowd much more than a serious simulation of sorts.