Earlier this month, I played through the three scenarios in the Sticks and Stones module called “Poland Strikes!” from Yaah! magazine issue 4. This is a modern platoon-level tactical combat game from Mark H. Walker, the same designer of the World at War series, which had a similar theme.
As I noted in my previous playthroughs, the design of Sticks and Stones is quite a departure from the World at War series in a number of ways. Having enjoyed playing both series, I wondered what brought Mr. Walker back to this genre again and what his plans were for this new series. Thanks for taking the time to answer my questions, Mark! 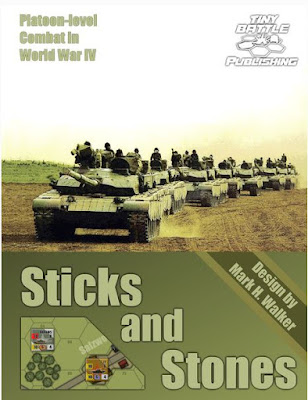 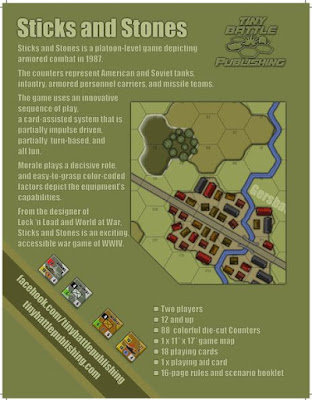 HaH: What drew you to this particular theme? What is it about modern combat that catches your imagination?

MHW:  I wish I knew the answer myself. LOL. Or maybe it’s that I do know the answer/s and there are just too many of them. Sir John Hackett’s The Third World War is what sparked my initial interest. To be honest, I thought the political aspects of the book were dull–well written and beautifully conceived, but just not my cup of tea. On the other hand, I ate the combat scenes with a spoon, rereading them multiple times.

Then I found Harold Coyle’s Team Yankee. I remember reading the book in one sitting. I was duty officer at EOD Mobile Unit  Three, it was a slow night, and I just sat and read, mesmerized. Probably should have been making rounds or something. 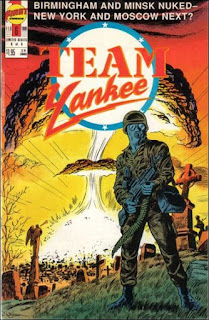 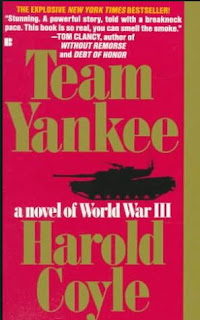 There’s also something about the balance and disparity of forces that makes for great gaming. By 1985 America’s military was recovering from the post-Vietnam gutting and becoming a well-trained, well-equipped force. Analysts believed that on defense an American battle group could handle one three times its size. It’s exciting to command a few, elite cardboard warriors as they fight the Russian hordes. That said, I believe first line Russian tankers would have fought well, and the T-80 and T-64 are not the slouch tanks that Iraq’s export T-72s were.

Finally. Madonna. The mid-eighties were just a great time. Girls wore bustiers to nightclubs, Mike Schmidt played third base, and no one judged you when you downed two cheeseburgers and a large fries.

Bottom line, I just like the era… and throw in paranormal (which Sticks and Stones doesn’t have) and it’s like catnip/scotch/whatever your addiction is. In fact, I *think* the next module of ’65 will be titled Dark War, take place in 1985, and include not only Abrams, M203s, and Soviet T-80s, but also the characters from Dark War: Retribution. The power system, card-driven play, and importance of heroes make the ’65 tactical system a natural for getting characters such as Katarina and Mike Hudson into the gaming mix. Uh… sorry for the self-promo, but not really.

HaH:  What can you tell us about any other planned expansions or modules for the Sticks & Stones/Platoon Commander series?

MHW:  A friend of mine, David van Hoose (his daughter edited both my Revelation and Retribution novels) is almost finished with a Platoon Commander Indo-Pakistan module. Counter art is complete, scenarios are designed; we just need map and card art and testing.

Right now, I’m jazzed about designing a Night of Man/Platoon Commander mashup for Yaah! #7. It
will be a Platoon Commander mini-module based in the Night of Man universe. The Earth Militia will have platoons of Abrams, M113s, Bradleys, infantry and TOWs pitted against troops of plasma-firing alien tanks, power-armored infantry, and Spider Bots; it’s the kind of stuff that gets my heart pumping. I love mixing games, genres, and universes.

Those are in the immediate future, but I’m always thinking about the system. Sticks and Stones is Tiny Battle’s bestseller and Korea 1950 is in the top five, so I think folks like pushing Platoon Commander counters around. I’d love to take it to the West Front WW2, and there are a lot of 1987ish battles left to fight. To be honest, if I had a real strong idea of what people wanted to see next, that’s what I would design, but that type of input is difficult to get. 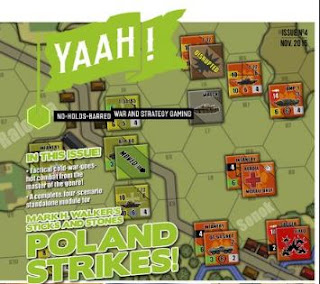 HaH: What was the inspiration behind covering a conflict between Poland and Hungary?

MHW: That is a strange combination/confrontation, isn’t it? If I remember correctly, I didn’t want to do the standard West German vs Soviet thing and I was searching for other European grudge matches, so to speak. I asked my friend, Ania Ziolkowska, and she pointed out that Poland and Hungary have a bit of a feud, so Poland Strikes was born. Perhaps we would have been served better with  more traditional opponents, but it’s worked out okay. Yaah! #4 remains our best-selling issue.