Today, I thought I would recap the action in another scenario from Poland Strikes! – a module for Mark H. Walker’s Platoon Commander / Sticks and Stones series.  Published in Yaah! magazine issue 4, this game features a matchup between Poland and Hungary while World War rages in Central Europe following a nuclear exchange between the US and Soviet Union in 1987.  Got it? Okay, let’s get down to it!

In our first scenario, 861, the Poles invaded Hungary along the axis of Highway 861 and were roundly defeated by the Hungarians in the first play and then brilliantly successful in my next playthrough. This time, the Hungarians are on the offense and trying to take back three cities held by the Polish army. Capturing the cities to the east of Ralosca (Batka, Sonok, and Zelin) gives the Hungarians a decisive civtory. The Poles win if they maintain their defensive hold and can manage to capture one hex of Ralosca.

The Poles set up east of the river on the map with 4 infantry, a Sagger, a couple of BMPs and an OT-64. Later on in the scenario, the Poles get a T-72 tank unit as a reinforcement.

The Hungarians set up second on the east side of the map. They get six infantry, three BTRs, and six tanks. This scenario lasts six turns. One neat thing about it is that the Hungarians can discard cards to have an infantry platoon show up in any vacant cities should there be any Hungarian infantry units available in the counter mix. 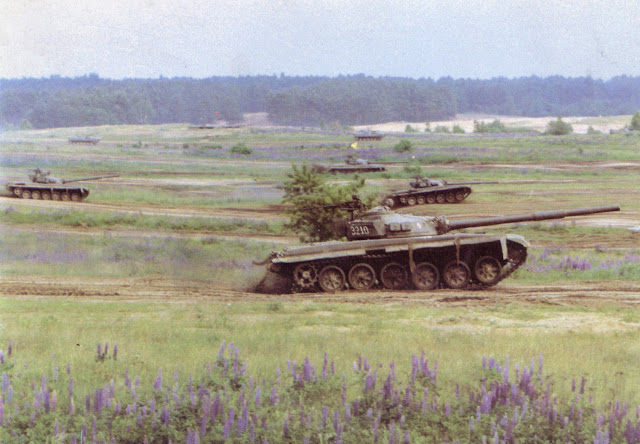 The Poles decide to put their BMP-1s east of the river with a clear view of the approach towards the city. The idea is to knock out as many of the Polish BMPs as possible before they get to the Polish-held cities. Once the infantry and their carriers are taken care of, the defending Polish infantry should be able to hold their own against tanks and armored vehicles in close assault city fighting.

The Hungarians plant T-72s to the south on top of the hills with a clear view of one BMP-1 while several T-55s are placed to the north. Infantry begins in the city of Ralocsa. The tanks will hit the anti-tank vehicles and then allow friendly APCs to transport infantry toward their objectives.

Some poor setup decisions by the Hungarians results in the BTR-60s in Ralosca getting plastered by AT missile fire from Polish BMP-1s. The Hungarians quickly reorganize their forces and fire back, but do very little against the Polish army. The Hungarians lose an infantry platoon and two of their APCs. Turn 1 ends with the Hungarians scratching their heads.

The tide turns quickly in turn 2. The Hungarians benefit from a focus marker played in the Initiative Box and gain the upper hand. They immediately discard two cards to get an infantry platoon in Zelin. They start using their tanks to great effect. They destroy a BMP near Batka with combined fire from T-72s sitting on the hillside to the south of the city. The Hungarian special forces in Zelin manage to disrupt a nearby Polish BMP-1. With the Polish anti-tank missile threat severely diminished, the Hungarians start a cautious advance towards Sonok. An infantry carried by a BTR-60 dismounts in the forest to the south of the city and prepares for an advance.

A crucial turn for both sides. The Polish lose initiative yet again.   The defending Polish infantry in Sonok is eliminated by accurate T-55 fire from the west. The Hungarians press their infantry and the BTR-60 east towards Zelin. One T-55 advances east in hopes of getting a closer shot at the northernmost BMP sitting outside of Zelin in the next turn. Hungarian infantry makes it adjacent to the Polish in Batka and eliminates it later in the turn with close assault.

A reinforcement T-72 enters from the north edge of the board this turn – the first good news for the Poles in a while. Most of the rest of the Polish units are disrupted or reduced or both. Not looking good right now for the defenders.

The Hungarians draw a card and play ECM on the Polish focus marker in the Initiative Box. The Poles cannot reroll any bad initiative results this turn. The Hungarians win initiative this turn! The remaining Polish BMP-1 near Zelin is destroyed by a T-55 so now only the pesky Polish T-72 remains.

Batka is cleared now thanks to the close assault at the end of last turn.  The remaining men and tanks pour through the city and close in on their final objectives – Zelin. 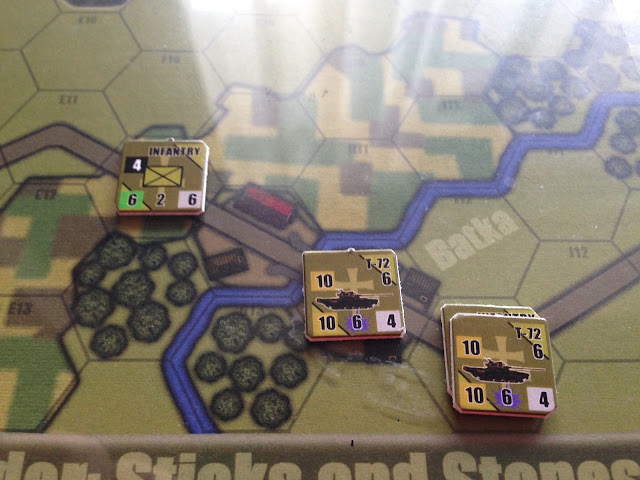 Hungarian infantry makes its way east from Sonok towards Zelin and comes under fire from the Polish T-72. It is reduced and disrupted.

The Hungarians hammer on the T-72 but the Poles are able to fend off the shots again and again. They play the “Faulty Ammunition” card to keep the odds column shifted one left. There really isn’t any hope left for the Poles. The Hungarians now have a BTR-60 sitting in the city of Zelin and they don’t seem to be going anywhere. Still, let’s see how this one ends.

The Poles finally get initiative this turn. They start off the fire phase with an “Aggressive Action”card, which can be used to increase the HE firepower of an AFV. The Polish T-72 benefits with a nice odds-column shift to the right and eliminates the BTR-60. A T-72 fires back and fails to destroy the Polish tank. Finally, a T-55 puts the final Polish unit out of its misery and the rest of the Hungarian army pours through the town, having won a Decisive Victory.

I am getting better at using the system and I find it very smooth. I finished this scenario in under an hour despite the larger number of units. It really is very intuitive once you start to remember the column shifts and the ranges for different colors.

One thing I didn’t really think about before was just how easy it was to read the information on the counters. Sometimes I would find it hard in World at War to read the font or I would have to squint to distinguish a “5” from a “3”. Not so in this game. I’m not sure if its the color pattern chosen for the counters or the font or what but I find it easier to read. Even though I’m pretty bad at this game, I’m enjoying it more and more with each play.

As for the tactics, the Poles have their work cut out for them. They don’t have any tanks to defend with and it is hard to find decent fields of fire to hit at the Hungarians at long range. In this case, it might have been better to have the BMPs set up way back (I’m thinking N12 and K12) and cover the appraoch and hills to the south while infantry is placed to the east of the river in Sonok and a Sagger team set up in Zelin. Funnel the Hungarians into an attack on Sonok and then fight a withdrawal until you can bring in your T-72 on turn 3. If enough Hungarian tanks are destroyed or reduced by that time, maybe risk a counterattack on Ralosca.