All content published herein is copyright 2017, Brad Smith. Images are either stock photo standard rights or public domain. Please contact me at this domain if you wish to use any of the material or images posted to this site.
A few months back, I had the rare pleasure of refereeing a game of “Delta Force – America Strikes Back!” This is based directly on the first scenario in the main rulebook called Operation Red Thunder. We tried to play it straight but you’ll find some irony seeping in here and there with various nods to 80s action movies. We ended up using some of the Phoenix Command rules for the combat at the end. 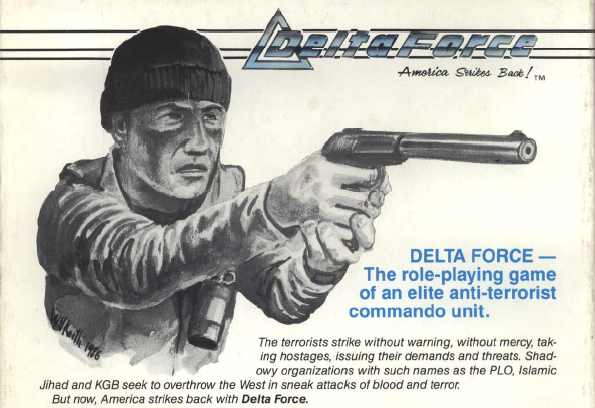 ———————-
Date: May 8, 1986
The call came in at 1050 this morning. You were up and doing your morning training routine at Rammstein AFB. A nervous captain pulled up in a Hummer and told you to pile in. 10 minutes later, you were being whisked away by Huey towards Eschwege, a US Army base within a stone’s throw of the East German border.
During the 90-minute flight, the Delta Force captain briefed you over the headset as the green hills and forests of West Germany rolled away beneath you.
“This morning at 0925, MPs at a US Army base near Eschwege received several panicked phone calls from witnesses who claimed they saw a shooting occur at the base PX. From what we’ve been able to corroborate, at least three and possibly four men entered the store shortly after it opened at 0915. One of the men pulled out a handgun while another reached inside a large plastic garment bag he was carrying and pulled out several Soviet-made assault rifles, distributing them among his accomplices. The group opened fire, reportedly wounding and possibly killing several bystanders. Most of the military and civilian personnel in the PX at the time ran out safely.
At 0955, the local base commander at Eschwege received a phone call from the PX. A male voice on the other end of the line identified himself as belonging to The United Action Front of The Red Army Faction.”
The person on the phone stated that they had taken over the PX and were holding several hostages. The demands were that three members of the Baader-Meinhof currently held in Bonn are to be released as well as access to a network-wide TV hookup to make an anti-American political announcement.”
“The German police have offered leniency to the terrorists if they give up their hostages and come out safely but they have been firm with their demands and they have stated they will kill their hostages by 1800 if their demands are not met. They state that they have taken three hostages – two German check-out girls and one US soldier, which we can confirm as highly likely after getting more detailed information from witnesses.”
“Despite pleas for more time to negotiate from Bonn, Washington has given the go-ahead for a military option in resolving this crisis. Delta has authorized a four-man assault team to take on the job. Your task is to carefully study the map of the building and decide on a plan to rescue all the hostages and either capture or eliminate the terrorists inside the PX. If you have questions, now is a good time to ask them.”
At this point, the players asked for a map of the PX, which I gave them: 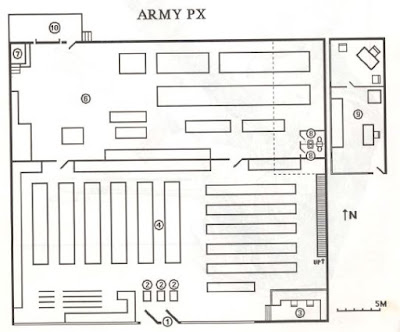 One of the players asks if there are eyes on the PX right now:
The captain nods his head. “Affirmative. Right now, the area around the PX has been cordoned off by MPs and local police. An experienced civilian negotiator from Frankfurt who happened to be running a training course this morning for the local police is on site and has been in contact by telephone with the tangos.
The front of the PX has two automatic doors and there are also several large glass windows.We have spotted movement inside. In the front of the store, we have sighted two people, probably males, who were wearing ski masks and holding AK-47 assault rifles.
There is a door at the back of the store that goes to a storage area. The building is about 10 meters high. There are no windows or doors on the sides of the building. If you choose to go through the roof with a breach, we can provide you with the materials you need.
Note that there is an office room suspended directly above the main floor. It is accessible by stairs from the main floor. It is walled by clear plexiglass.” (marked as area 9 on the map)
The Huey nears the base at Eschwege just after 1230 hrs.
As the helicopter slowly descends to the tarmac below, you look over the general layout of the base area. You can see three concentric rings of vehicles and men set up around and inside the base. It’s a safe bet that the German police have cordoned off access to the base by setting up roadblocks on highways and major roads outside of it. Inside the base, the MPs have set up two perimeters – one inside the base and a smaller one around the PX itself.
As you step out of the helicopter, you observe that the base is alive with activity. It is on high alert. All posts are double-manned with heavily armed sentries. Men in military trucks and jeeps wander the roads of the base conducting patrols and security checks.
A burly man in his 50s walks towards you. He sports a shoulder-length mane of grey hair. He is wearing a light Ocean Pacific jacket, a ruffled polo shirt and blue jeans. He introduces himself as Tom and the restrained power behind the handshake is evident. 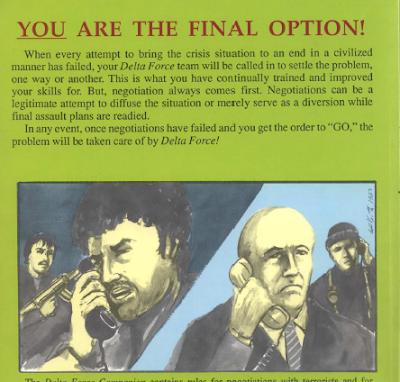 He gestures towards an ageing van sitting across from the tarmac. The van’s baby blue exterior shows scuff marks and dents that mark years of hard driving. Everyone gets in and Tom gets behind the wheel without saying a word. You sit on the benches in the back of the carpeted van and a Willy Nelson tape blares as the engine roars to life.
Looking out the window, you can see Tom getting waved through several checkpoints after he points to an ID sticker on his van’s windshield. Although you’ve never been to Eschwege before, it’s more or less a typical army base in terms of layout and aesthetics.
You note from the signs that Eshwege is the sometimes home and training center for the 1st battalion of the 1-68 Armored Regiment of US V Corps. The regiment’s main mission is to help defend the area around the Fulda Gap in the case of Soviet invasion, which would be spearheaded here by the 39th Guards Motorized Rifle Division headquartered just over the East German border in Ohrdruf. Consequently, it is likely that the troops stationed here have been trained and equipped to a higher degree than most other units. This is confirmed by your sighting of one of the brand new M1A1 Abrams tanks near the gates of the base as you pass by.
A few minutes later, you arrive at a ring of MPs and military police vehicles. Beyond them is the concrete pavement of a mostly empty parking lot of a single-story PX building with large glass windows in front. Tom stops the van and turns around in his seat. He motions towards the bench at the back of the van. Folding up the top of it, you find several automatic weapons strapped to the underside of the bench seat and pairs of binoculars and other optics in the hollow of the bench below. Tom idles the van and lights a cigarette while he listens to Willy Nelson singing about Blue Eyes Cryin’ in the Rain.
The players decide to get a better idea of who is inside the building and what is happening. In a risky move, they approach the building from the east and west and drill holes in the walls to plant borescope cameras and get a video feed going. I roll to see if they are spotted by the terrorists inside but they fail their alertness rolls.
The players find that the hostages are located near the base of the stairs on the east side of the building.  One terrorist is sitting at the desk in the second floor office, talking on the phone with the negotiator. Two terrorists are in the back warehouse area covering the rear door while another two are in the front of the store, chatting with each other and roaming around the store front nervously.
The players chit-chatted about various ways to enter the building and subdue the terrorists without alerting them. One of them wants to try and use Fentanyl to put everyone inside the PX to sleep but there is no available supply of the gas anywhere.  The team decides to go in loud, putting a breaching charge on the warehouse door at the back and a large explosive charge on the roof just above where the terrorist in the second floor office is sitting. The team will rope down from the roof at the same time as the charges blow and then enter through the front of the store windows (rigged with a strip of C4 to blow the glass), tossing flashbangs.
Our four brave operatives – Ox, Jet, Pete, and Ruggero Benavidez – are ready in an hour. The breaching charges are planted and everything appears to be according to plan. At the last minute, the team decides to simplify things by stacking up at the southwest corner of the building rather than rope down.
The team sneaks up to the building and gets into place. Stacking up against the wall along the southwest side of the building, your heart begins to race and adrenaline coarses through your body as the radio chatter over your head set picks up in intensity and then dies off as the go time nears. Last minute checks of equipment are made and Benavidez pulls a flash-bang grenade and yanks the pin. Everyone announces “green” into their microphones and Tom gives the go signal in return.
You can hear the crunch as the rear breach blows at the back of the building. You can hear a single angry shout before there is the sound of a much larger explosion from above. Finally, you hear the tinkle of glass shattering in the front of the building from left to right.
Tom tries to give an indication of roughly where the nearest terrorists are to the team’s stack (4 Combat Action or CA). Benavidez throws a grenade into the building through the window, trying to place the grenade three yards in. 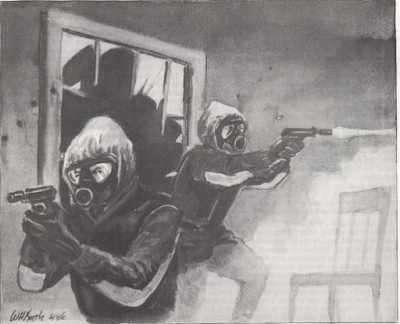