Phoenix Command was a combat system for miniatures and roleplaying games (and whatever else you wanted) that was published in the 1980s.  This wasn’t just any combat system.  Designed by NASA rocket scientists (I’m not even joking there), the system aimed for realism through an incredibly detailed rules set.

Combat was segmented into two second impulses and half-second phases so everything – and I mean everything had to be accounted for (even flicking your weapon from safety to auto needed to be done).  Weapon damage and penetration was based on detailed ballistics tests.  Damage to the human body was based on computer simulations.  The first time I played the game, it really took me almost an hour to go carefully through the tables and figure out the modifiers and then apply damage.  That was for a single shot!

Leading Edge Games, the publisher of Phoenix Command (and the Aliens and Living Steel RPGs) has long gone out of business. But a quick browse through many RPG forums will eventually reveal some form of discussion about the sheer insanity of the Phoenix Command system coupled with admiration that someone actually tried to seriously model realism as closely as they could by releasing an uncompromisingly complex rules set.

Whether or not Phoenix Command succeeds in its attempt to closely hew to realism is up for debate.  I do think it does a considerably better job of it than most RPG systems I’ve seen where characters seem to take an inordinate amount of damage from bullets (or swords or arrows or whatever) before being adversely affected in any way.  Getting shot in Phoenix Command commonly results in very fatal problems and even if your character doesn’t die, there’s a good chance they’re going to be in shock and not real functional for the rest of the firefight.

I’ve played Phoenix Command for some time now and I can see why people are somewhat intimidated by the rules.  They are a bit hard to grasp at first – and there is a lot of referencing tables and flipping back and forth to find results.  Doing all of this for an entire evening in a face-to-face group game session would tax the patience of the most gentle gamer.  Luckily, I’m a solo gamer with lots of time on my hands and a basic familiarity of the system, so I could afford to sit down with the system and use it to model a small firefight scenario using my old Axis & Allies miniatures and a bit of ingenuity.

It is the summer of 1998 and the former Soviet republic of Lateria is in a political crisis. Under the guise of restoring regional stability, Russia has decided to send in troops without invitation from the Laterian interim government.  The West has condemned the Russian action and tensions are running high as all sides attempt to find a diplomatic solution.  In the meantime, the Russians have seized a small military headquarters building near the Laterian capital, taking two local Laterian commanders prisoner.  The Laterian government is outraged at the military action and decides to send in a group of special forces to retake the building by force and rescue the prisoners. 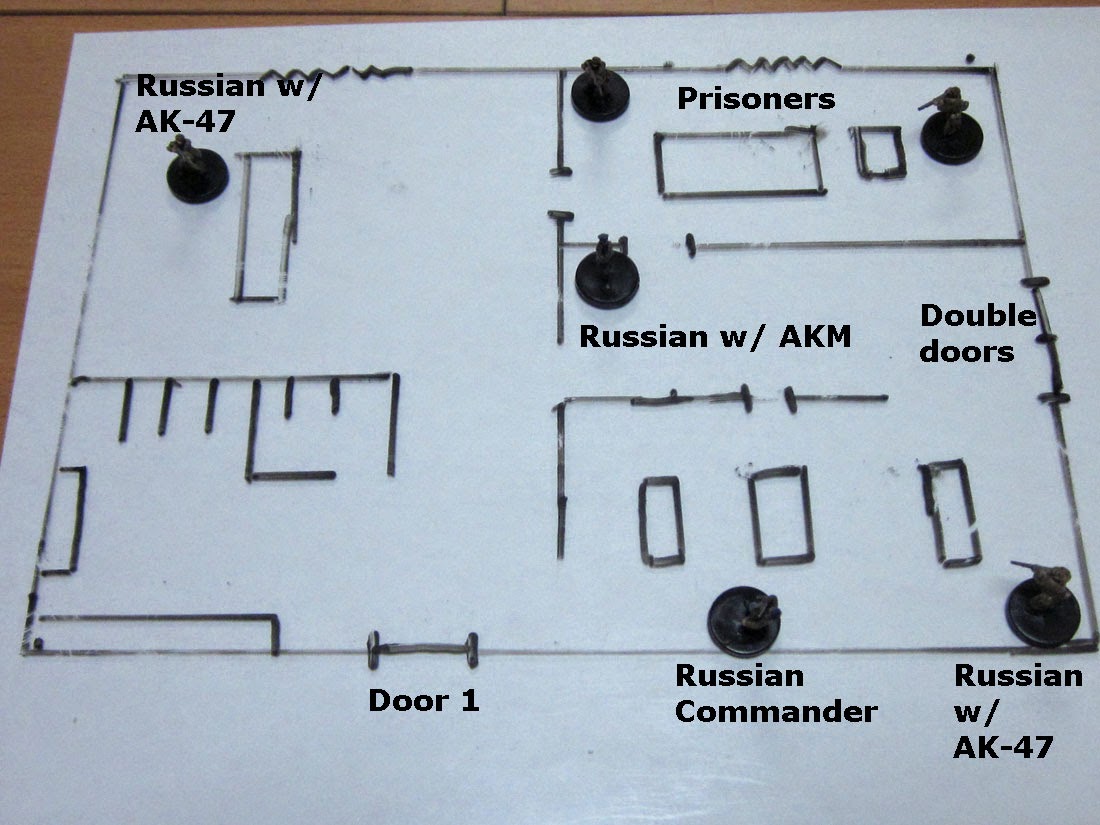 There are only four Russians inside but they are well-armed and well-trained.  The Russian commander has a Makarov pistol but knows how to use it.  The two prisoners are unarmed (of course) and their hands are tied, left to sit in the conference room.  The Russians are prepared for an attack and are keeping watch on the two entrances – one is a single door on hinges while the other is a set of double doors.

The Laterian Special Forces are all armed with AKMs and grenades.  Their skill rating is “Elite” so they can all use their weapons quite well.  They are wearing flak vests and kevlar helmets, which should protect them a little bit.

The Laterians split up into two fire teams, A and B.  Team A will go in the single door on one side of the building while Team B, consisting of 3 men, will try to pick the lock on the double doors on the other side.  They’re hoping to surprise the Russians and hit hard.

The Laterian Team B has one man pick the lock (no breaching demolitions here – I guess this is all short notice) on the double doors.  The Russians make a roll for sound detection and make it.  One of the Russians in the hallway nearest the double doors goes into a kneeling position and assumes a firing stance.

One of the men from Team B pulls on the door too early and the man who picked the lock is standing exposed in the open.  The Russian in the hallway fires on full auto and hits the Laterian with 7 bullets.  Ouch!

Laterian Team A has the door open already and starts ducking around the corner and firing at the Russian commander, who is firing back with a Makarov. 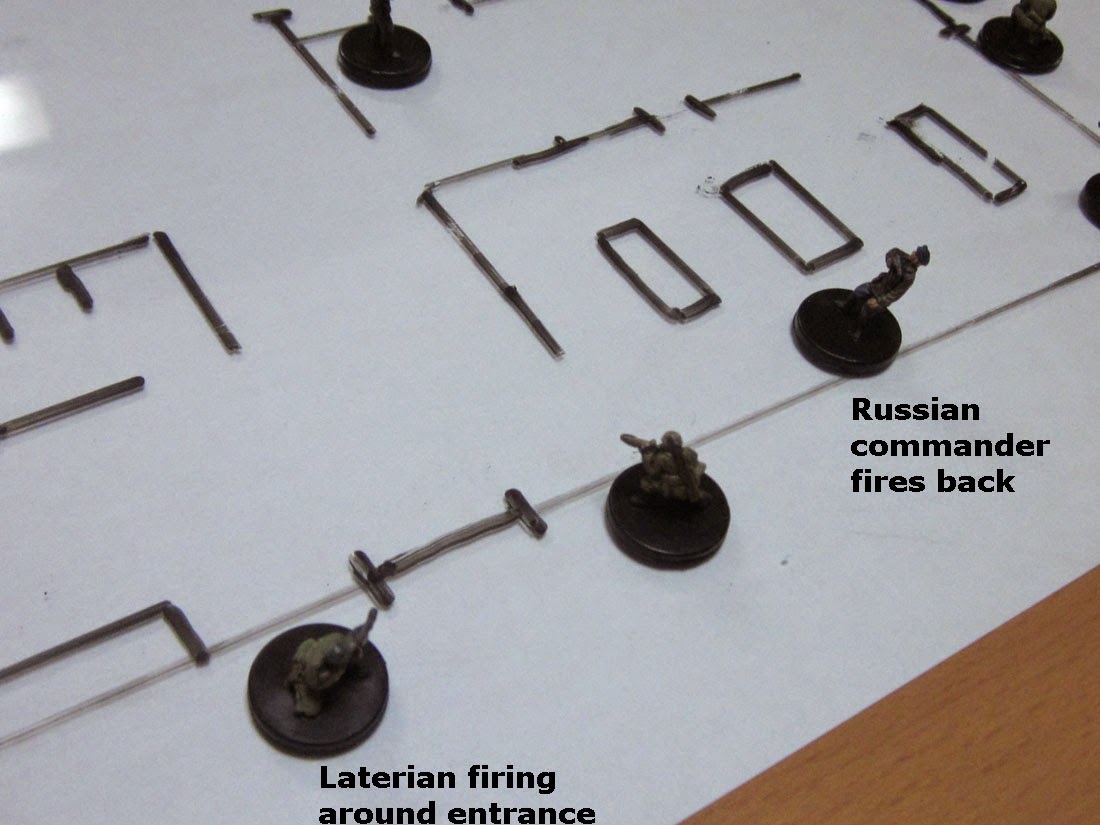 The two remaining Laterians from Team B start to return fire.  One of them fires at the Russian who has just shot their friend.  He brings up his AK-47, aims for a half second and fires.  At this range, he hits with his single shot and it hits his enemy in the mouth, instantly killing him.

Team A sends a man running into the building after exchanging a dozen shots with the Russian commander with no purchase.  As one member runs in, the Russian commander fires his Makarov, hitting the Laterian in the head.  Luckily, the kevlar helmet prevents the bullet from penetrating but the Laterian has a hell of a headache now and staggers to his right.  The other member of Team A moves in and hits the Russian commander in the left forearm.  Since the Russian is in a firing stance with his elbow bent and in front of his chest to support his firing arm, the bullet overpenetrates through the forearm and into the chest, resulting in a lung hit that kills him.

One of the Laterian Special Forces preps a grenade while the other puts his rifle around the corner and fires blindly.  Automatic fire sprays close to the nearby Russian but fails to hit.  The grenade is prepped and the Laterian throws it around the corner.  It hits the wall and bounces off gently, next to the Russian, who tries to run but only makes it less than a yard before it explodes and kills him.

Team B has now entered the building and looking around for bad guys.  The single remaining Russian sees one of the Laterians with his back turned to him and fires but misses.  Both Laterians from Team A advance near a corner and start spraying fire at the Russian, who is hit by the blind fire and killed.

The prisoners are rescued and the Laterians seem to have won this one, suffering one dead. 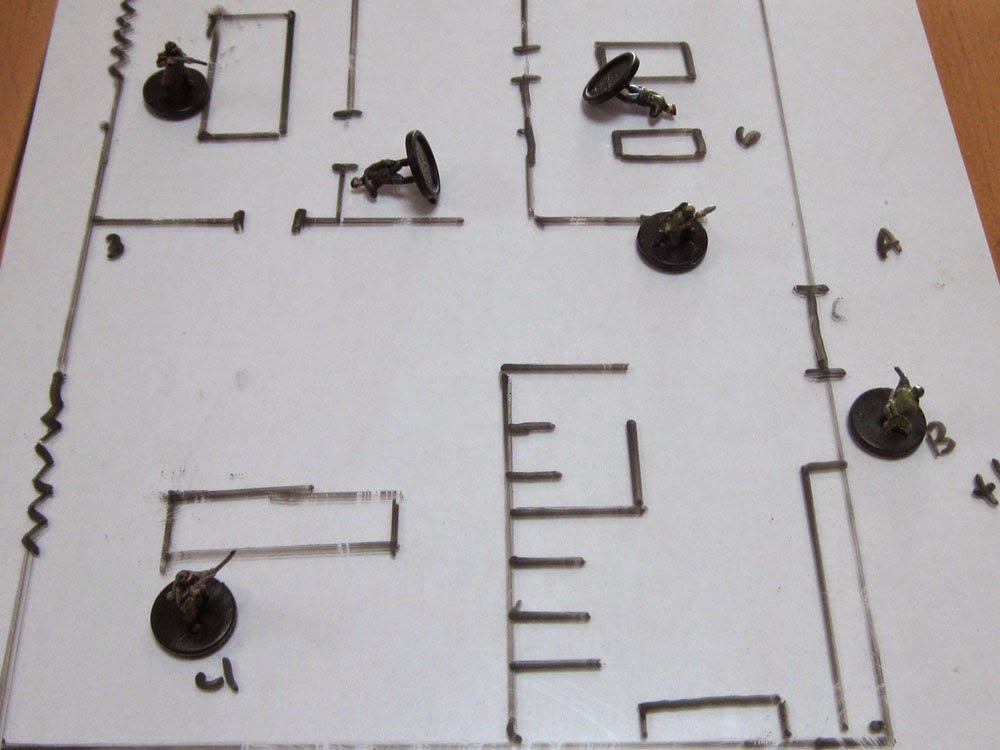