Since becoming an avid solitaire gamer several years ago, one of the games I kept hearing about over and over again was Victory Games’ Carrier (1990). The reviews I read online spoke about it with the kind of reverence you would normally reserve for saints or minor deities. It was one of those games that I always intended to buy but the high prices for this out-of-print Jon Southard design put it out of my reach for a long time.  As the end of last year approached, curiosity got the better of me and I trotted out the necessary self-justifications and rationalizations for splurging on a copy for my birthday. 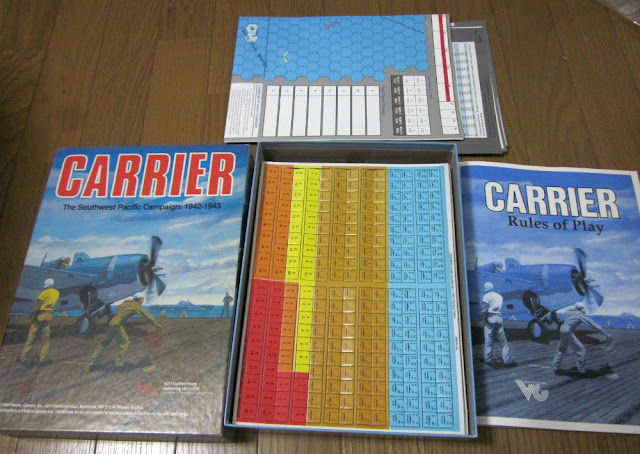 Late last month, my used copy of Carrier arrived in the mail. It was in near-mint condition and, to my astonishment, still unpunched. Did this thing really sit on someone’s shelf for 25 years without being played? Taking the counter sheet out of the box and leafing through the pristine rulebook, I was a little uncertain about what to do with this thing. But birthdays have a way of reminding us that we’re not getting any younger. I was not going to let this thing sit on my shelf for years in hopes of reselling it some day or just for the sake of bragging rights about my collection. I got to work punching the game counters out on the same day and within a few short hours, the game transported me into the shoes of a US Navy fleet commander in the Pacific during the early days of World War II.

Before I get into the scenario replay, I should mention a couple of things about Carrier for the uninitiated. This solitaire title was an attempt by Jon Southard (who also designed one of my favorite games, Fire Team) to model carrier operations in 1942 and 1943.  In its 67 pages of rules, Carrier gives you everything you need for a tense journey into the fog of carrier warfare. As the US player, you need to make sense of an ever-changing situation by sending out search planes and taking educated guesses about the location and intentions of enemy forces. The threat of facing a Japanese strike is ever-present and, due to the game mechanics, you won’t know the enemy has spotted and fixed your position until there are Japanese dive bombers overhead. Woe betide the unlucky player who has a carrier deck full of fuelled and armed SBDs ready for take-off just as the bombs start to fall.

The game provides you with an A.I. that very ably depicts the fluidity of Japanese actions (and reactions) in a way that actually makes sense without resorting to paragraph-style events booklets (like VG’s wonderful Ambush!). Jon Southard pulls out all the stops to pull off this surprisingly elaborate sleight-of-hand. Carrier players will be using chit-pulls, charts, die-rolls, tables, and a very rigid sequence of play for both his own forces and those of the Japanese “player”. Despite the complexity of the game, the rules are taught to players in a “learn as you play” style. You read a few rules, play a scenario that applies them and then do the same until you have learned everything you need for an all-out campaign game with all the bells and whistles. 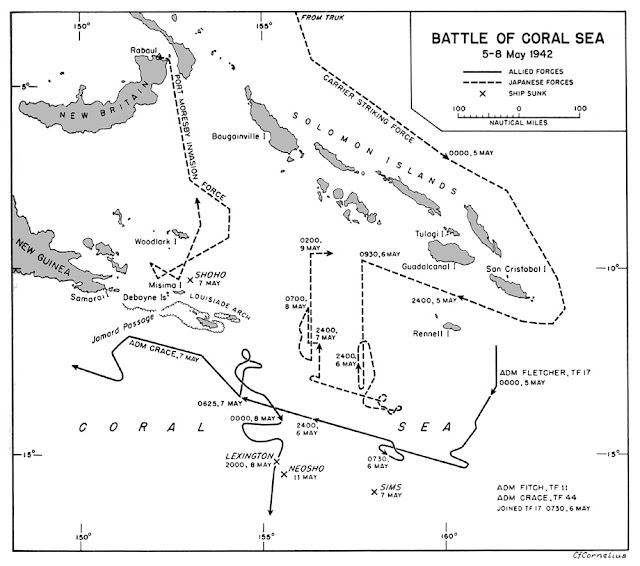 As I am still slowly learning the basics of this game, I have only just recently played through Scenario 2. In the first scenario, players apply the attack sequence by running an air strike against a large Japanese carrier force as done in The Battle of the Coral Sea on 8 May, 1942. Scenario 2 is a slightly expanded version of this first scenario. This time, however, the US player needs to manage carrier operations and put together strike packages and try to make contact with detected Japanese task forces.

The US player starts out with Lexington and Yorktown. The Japanese have two forces. Force 1 is the escort carrier CVE Shoho with DD Sazanami. Force 2 is the much larger force of CVs Shokaku and Zuikaku with two CAs and six DDs. Needless to say, the big victory points are in sinking or damaging the Japanese CVs. At the same time, the CVE could pose a threat if it shows up at the wrong time.

I start off by putting up CAP around the US task force. Four steps of F4Fs patrol the carrier group (one aircraft counter equals two steps).

Managing carrier operations is a game in and of itself in Carrier. Planes can either be in one of four states: on deck ready for launch, on deck and unready (for aircraft that have just landed, for example), in servicing on the lower decks, or way down in the hangars. There are hard limits placed on how many steps of aircraft can occupy these locations and aircraft need to be cycled through these locations to get them ready for launch. For example, aircraft that are in the hangars need to go to servicing before they can get on deck.

No more than 8 steps of aircraft can be on deck (both in the ready and unready box) at the same time or you’ll be unable to launch aircraft until you clear out some room somewhere. You also cannot land and launch planes at the same time, so you might have to face the agonizing decision of whether to send your guys on deck up after that Japanese carrier or to let your returning aircraft, low on fuel, come in for a landing, which will delay your strike and can leave you vulnerable to a Japanese strike. There are no correct answers – only hard decisions.

CVs Lexington and Yorktown both have six steps of aircraft on their decks. The Lexington has two steps of F4Fs and four steps of SBD (dive bombers) ready to go. Most of my SBDs are in Servicing while the rest of my planes are in the hangar.

The first turn passes without any sign of the Japanese. On the third action phase of the second turn, Force 2 is located about four hexes northeast of our carrier position. I launch the first strike, composed of all the planes on deck from the Lexington and Yorktown. After the launch, I move all my planes currently in Servicing up to the deck and get them ready to go.

Air Strike 1 is assigned Force 2 as its target and it flies towards it.

Each segment, the air strike moves one hex towards its target. During the segment, I’m rolling to see what the Japanese are doing. Force 1 might appear unexpectedly and launch an air strike on my ships or Force 2 with its two CVs might be launching its planes at my force but I won’t know it until they run into my CAP (and there is always a chance they will slip through my CAP too).

Air Strike 2 is launched in the next segment and is assigned Force 2 as its target.

I could have kept them back for a hit on the Japanese escort carrier but so far it has not been detected. The escort carrier is small potatoes anyways compared to the big fish in Force 2. Finally, I really need to launch these planes because it is never a good thing to have armed aircraft sitting on your carrier deck.

Air Strike 1 arrives in the target hex and attempts contact.  I roll a “3” and the contact attempt fails. A second contact attempt follows and the Time Aloft marker is increased to 5. The strike package is beginning to get low on fuel now.  I roll a “7” this time and the pilots find the Japanese carriers below. Unfortunately, the Japanese have a level 4 CAP up, which manages to shoot down 1 step of our aircraft. Our TBD takes the hit. Luckily, the Japanese AAA does nothing to the strike package and we have a combined attack strength of 18, which gives us 1 attack roll at -1 and another attack roll at no modifier. I manage to score 3 hits on the Japanese carriers. The Shokaku takes 1 hit while the Zuikaku takes 2 hits. The carriers are both lightly damaged as their hit capacities are both 8.

Air Strike 1 heads for home and a new segment begins. Just as Air Strike 2 is coming in, I roll a “10” for Japanese action and the scenario ends. Presumably, the Japanese have slipped away somehow. The US scores 2 VPs for the CV hits while the Japanese score 1/4 VP for eliminating a US air step. The result is a draw.

Since this was pretty anti-climactic, I decided to see what would have happened had Air Strike 2 made its way over the target.

Air Strike 2 arrives and makes contact with the Japanese task force. We roll for surprise and get a “10”, which means we have caught the Japanese with planes sitting on their decks! This seriously hampers the Japanese CAP level and there will be no AAA coming at our planes. It also means a whopping +5 to our air attack rolls. The Japanese CAP manages to score a hit and a TBD step is lost.

Totaling up the combat values of our five SBDs, we get 30 attack points, which means we get 2 rolls with a +1 modifier (along with our +5 modifier for catching the planes on the deck). We manage to score 7 hits total, which is spread evenly among the two Japanese carriers, with the final hit randomly determined. By the end of the segment, both the Zuikaku and Shokaku have taken 5 hits and they are very heavily damaged.

The Japanese will wisely attempt to retire from the battle. Without any planes on deck and Air Strike 1 coming in for a landing soon, it will be nearly impossible to catch the Japanese fleet so we can safely call it a day. I tally the VPs as 28 for the US and .5 for the Japanese, which is an overwhelming American victory.

Although this was an incredibly tense scenario and lots of fun with plenty of decisions, I have still barely scratched the surface of Carrier.  Due to the graduated “play as you learn the rules” approach to the system, it will be interesting to see what happens as things get more complex. I’ll keep you updated as I play through and learn more rules and I think it should make for some interesting reading.