All content published herein is copyright 2017, Brad Smith. Images are either stock photo standard rights or public domain. Please contact me at this domain if you wish to use any of the material or images posted to this site.
Following up from my interview with Mark H. Walker about Flying Pig Games, I recently had a chance to talk with Mary Holland Russell, the head honcho over at his other gaming company, Tiny Battle Publishing, Mary was kind enough to take some time from her very hectic schedule to answer my questions and here’s what she had to say:

HaH: Tell us a little about yourself and how you came to be involved with Tiny Battle Publishing.
MHR: My husband is the editor of Yaah! magazine. Mark Walker asked Tom to recommend someone to run Tiny Battle, and he threw my name out there. I don’t have a wargaming background, but I have a lot of business experience and have dealt with creative types in the past.
HaH: What are your own gaming interests?  Do you have a favorite game or era that you prefer?  Any favorite designers?
MHR: I got into modern gaming by playing Eurogames, train games and D&D. Outside of the games we publish through Tiny Battle, most of my gaming still falls into those categories, some of my favorite games are Dominion, Le Havre, Chicago Express, TransEuropa, Puerto Rico, Pandemic, Forbidden Desert, Sushi Go, Dead of Winter, and so many more. I also play video games and I especially like open world games such as Fallout, Elder Scrolls, Infamous, and Borderlands, but I also like other games such as Ratchet and Clank, Bio-Shock, Diablo, and Little Big Planet. I have diverse and eclectic tastes.
I got into wargames because my husband started designing wargames and he needed a playtester who was available 24/7. I really enjoyed playtesting his game Alma (his very first wargame) and breaking it. That’s basically what I was “hired” to do, break his games. I love history so I don’t have a favorite era, but as far as the war games go, I prefer battle-level and operational games. I enjoy mostly Columbia block games (I once trounced Tom–the Scottish player– so badly in Hammer of the Scots, poor William Wallace was dead before he could do much) and GMT games, and of those, without a doubt, my favorite is Commands and Colors Napoleonics. We recently bought Sekigahara, which I’ve had my eye on for a long time, but we haven’t been able to play it yet because we’re both so busy. I would say that I have a preference for wooden blocks in games as opposed to a particular era.
My favorite designer would be Tom Russell. ‘Nuff said.
HaH: You were involved in the film-making business before coming to Tiny Battle Publishing.  How has that experience shaped your approach to game publishing?
MHR: I’m used to working with artistic-types and various personalities and bringing them together to create a unified whole. The films I made were more idiosyncratic and offbeat so they were intentionally not for every taste. You can’t be too offbeat with a game because all of the elements need to fit together. You can’t have something in a game “just because”, because it’s not a narrative form and doesn’t have room for digressions and counterpoints. But at its heart it’s still about people coming together, working within a budget, and a schedule. And you’re still trying to engage and entertain your audience.
HaH: How does a lower price impact a game beyond the obvious production values (art, number of counters, etc.) ? For example, does it often limit complexity?
MHR: It limits complexity to a degree in that with less counters and smaller maps there is a limit to what you can do. Our standard 17×11-inch map only has something like 250 hexes, that’s like 20 hexes on the x-axis and 13 on the y-axis. You certainly can have more complex rules but they have to work more or less in that format. For example, right now we’re prepping for publication John Gorkowski’s tactical WWI game, In the Trenches. Like most tactical games it has a fair amount of detail and a lot of status markers. But it uses very compact maps so that it makes sense for our model.
We will on occasion use larger maps, but then it becomes more expensive, and so we have to look at how marketable a particular topic will be. For example, Brian Train’s Bulge game, Winter Thunder, uses a 22×17-inch map and a full sheet of counters. This game is costing over twice as much as say one of our Shields and Swords games. But it’s also likely to sell more copies. So these are the kinds of things that I look at when evaluating a submission. 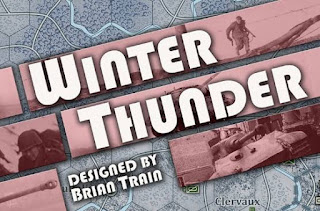 HaH: What do you think makes for an interesting game?  Is there anything specifically that you’re looking for when a game is submitted?

MHR: We’re looking for an interesting hook, mechanism or subject. And obviously it needs to be fun to play, but I also understand that everyone’s idea of fun is subjective. And not coming from a super-grognardy background, I take the opinions of others, such as Tom and Mark, into consideration. For example, I don’t particularly get into tactical games, but I know they have a sizable market so it makes sense to publish those games.
HaH: What are some releases from TBP that you think deserved a bit more attention?  What do you like about that particular game(s)?
MHR: Well, I like the Shields and Swords series not just because it’s Tom’s. We knew going in that these wouldn’t have the same market share as say a WWII game, but we felt that the market for the Middle Ages was big enough, and the cost per unit was low enough, that it was worth pursuing.
But these games aren’t selling as well as we hoped, so unless the sales improve, it’s unlikely that Tom will continue the series with TBP. It was a difficult decision to make. I like the games because of my own interest in the period and the simplicity and elegance of the ruleset. I still enjoy playing the S&S games Tom is working on even if we will be unable to publish them with Tiny Battle. So, it works both ways: just as we will publish games that aren’t my cup of tea, there are also those games that I really enjoy that we won’t be able to publish for market reasons.
HaH: How do you think the gaming business or hobby is changing? Do you see growing room for smaller publishers now that publishing costs are decreasing?
MHR: I think there is plenty of room for smaller publishers. However, unlike a big publisher like GMT , it’s more likely to be a hobby or sideline, because as a small publisher, it’s extremely difficult to make the kind of money that will allow someone to devote their full-time to it. Luckily my spouse works full time. I work somewhere between 6 to 10 hours a day for Tiny Battle, 7 days a week, and if I were to calculate my earnings per hour, I think I would have a conniption fit. So I don’t do that math.
HaH: Can you give us a few highlights of any upcoming games that you want to talk about?
MHR: In November, we have the first base set for our iteration of In the Trenches, as well as the second game of the Blood Before Richmond series, Glendale and White Oak Swamp. For December, we have scheduled a second In the Trenches base set and a new Mark Walker’s Platoon Commander game on Korea. We have some other titles in development which might come out by the end of the year, or more likely, early next year.
There are sequels to Invaders From Dimension X! and Neuschwabenland, a Napoleonics card game, another ACW series this one from Sean Chick, a horror-themed game, lots of other stuff. Tom is working on High Speed Hover Tank, which I’m having a lot of fun testing and breaking.