Scenario 1 of Victory Games’ 1986 “Aegean Strike” is called “The Battle for North Africa”.  It features an air and naval battle between the US and Soviets as the Egyptians (US allies) and Libyans (USSR allies) duke it out on the ground.

Okay, so this scenario only takes place on the Strategic Map (much like Scenario 5 of Gulf Strike).  There are no actual ground units anywhere on the map but there is a marker called FEBA (Forward Edge of the Battle Area) that represents the frontline between Egypt and Libya in the ground war.  The FEBA marker starts off in AV-07, halfway between Benghazi and Cairo, and it can be moved east or west by one of the major powers scoring five more hits on it than the other.  If the marker gets to Cairo, the USSR player wins.  If it reaches Benghazi, the US player wins.

Here’s a look at the map before we start: 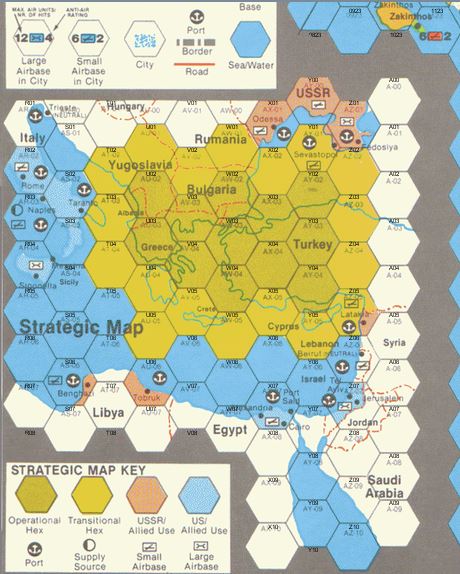 That’s it!  It’s a huge change from Gulf Strike’s strategic map, which covered most of the Indian Ocean and Middle East.  The US player gets a CV, BB, DD, LHA, two SSNs, a couple of F-16s squadrons in Cairo, and a P-3 Orion in Sigonella.  Meanwhile, the USSR player has a CA, CVH, two CGs, an FAC, along with several subs and a few aircraft stationed in Benghazi.  The Soviets set up first and they can set up in any strategic hex.  Neither side can enter a transitional or operational hex during play.  The US player sets up second in any unoccupied strategic hexes.
Due to time constraints, I’m playing this on and off and really slowly at the moment.  So in this post, I just examine my setup on the map for the Soviets.  I’ll get to the Americans in a future post and then do a playthrough.
Okay, so it’s time to play “Justify Your Setup!” Let’s jump in and take a look at the reasoning here.
I don’t know where the US player will set up yet. My guess is that they really have only two options:  They can go north through the Suez and try to come west or they can start in Italy and move east. I doubt they are silly enough to risk a setup placement in AV-06, AW-06, or AX-06 with the Soviets being the initiative player.  They might place submarines here but the CVH and the CGN both have helos to help take care of sub incursions.
My basic idea here is to set up a Soviet stronghold for my surface ships right on the coast of Libya and Egypt, pinching off access to the area with mines to keep out the American carrier group from this battle area.  Soviet Tu-20s will place mines in the AT-06 hex while the SSN in AY-08 will probably move up to the strait and place mines there in the first turn if the US carrier group starts near there.  The SSN in AY-08 is just slightly south of the canal so as to detect any US ships early on if they place in AY-09.
The SSGN in AX-07 is right on the coast off Cairo in order to launch cruise missiles at the US air base with F-16s stationed there. I know I should probably use it for intercepting US surface units instead but I’m hoping that the mines and the older SS subs will pick up the slack.  The CGs in AW-07 are there to ensure a knockout blow to the US airbase in Cairo early on.  They also have cruise missiles ready and loaded.
The FAC is in AU-06 to fire SSMs at any detected US surface ships that approach from the west.  They’re tucked in near the CVH and CGN to help give it some protection against subs and/or air attack.  The two SS subs located in the western portion of the map are there to detect and harass any American surface ships that set up there.  The SSN located right off the Israeli coast is just there to deter the US player from setting surface ships there from the start.
So my priorities, as the Soviet player, are to:  1) damage US airbase capabilities (destroy the F-16 base located in Cairo) 2.) prevent the US surface ships from getting too close to the Soviet surface battle group 3) detect and attack US surface ships in the region using submarines
Once the Americans have been crippled enough, I can use the remainder of my naval and air assets to comfortably hit at the FEBA marker and help the Libyans win the war!
Would you have set up any differently?  Have you spotted any glaring mistakes that I’ve missed?  Drop me a comment and let me know!