Well, I’m happy to say that for my first Father’s Day present ever, I was presented with a used copy of Aegean Strike, which is – as the box states – “A Complete Game Based on the Gulf Strike System”. Let’s see what we have here: 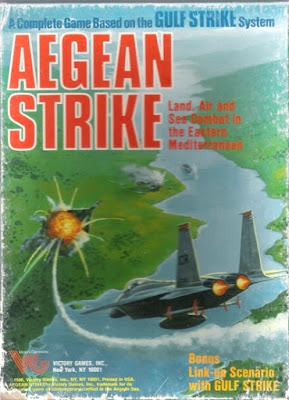 First off, take a look at that awesome box art!  We have an F-15 zooming in from the lower right corner after firing a missile that has already hit a MiG(?) at very close range.  In the background, we have a large waterway between two landmasses that leads out to the Aegean Sea or the Med or something.  There’s some proportional issues with some tanks visible far off below and in the distance having some kind of battle.  There’s a ship providing naval support (another proportional problem there).  But despite all that – this cover kicks some serious ass.  It has all the elements (sea, land, and air) of the game represented on there and I love it and it makes me really want to play this game right away.

In the lower right hand corner, there’s a blurb that says “Bonus Link-up Scenario with Gulf Strike“.  WHAT!?!   That sounds like hours and hours of gaming fun to be had for someone who either has a very large table in their basement or an extremely patient wife. I can’t tell you how excited I am to play the full she-bang someday.

Inside the box, there are three airbase displays, separate from the map (which is different than the airbase display printed right on the Gulf Strike map).  The US, USSR, and the Greeks get a separate sheet just for their aircraft. 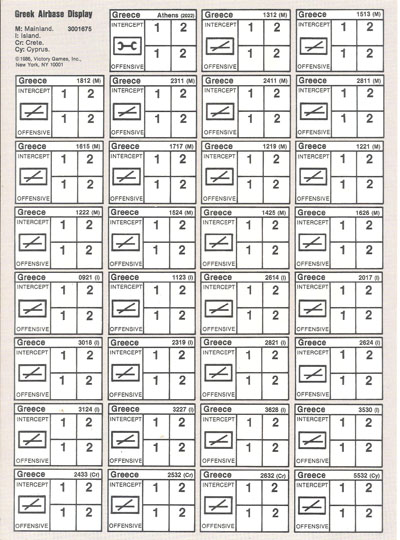 The rules for Aegean Strike are complete.  You don’t need to have Gulf Strike to play it.  However, as I mentioned above, there is a bonus link-up scenario with Gulf Strike if you do happen to own it.  The rules are pretty similar to Gulf Strike but there are some changes (marked with asterisks throughout the rulebook).  I’m not going to run down the changes here but if you’re interested, please read the excellent review of the game over at The Boardgaming Life.  Basically, there are no huge changes  but rather a tweaking of specific rules to add realism and options to the system.

The 520 counters in Aegean Strike include the playing pieces needed for the game’s represented nationalities – the Turks, Greeks, Brits, Americans, Soviets, Bulgarians, and several others.  The 5 scenarios are of wildly varying length (scenario 1 takes just 2 hours to play while scenario 5 is  30 turns long – you will be old and grey if/when you finish).  There are skirmishes from the Battle for North Africa to an entire World War III scenario with both the Gulf Strike and Aegean Strike maps being used.

A player record is in the middle of the book, which is very nice – and was something that was missing from Gulf Strike.  However, I found a much better record sheet over at Boardgaming Life that I recommend using.

The operational map covers southeastern Europe from Yugoslavia and Bulgaria in the north all the way down to Cyprus in the south. The strategic map is printed on one tiny corner of the operational map.  It covers Italy in the west down to north Africa in the south, Syria to the east, and the southern tip of the USSR along with Hungary in the north.  This is absolutely tiny compared to the Gulf Strike strategic map!  I can see that this is going to lead to some crowded and intense fighting right off the bat so I’m excited to start playing it.

If you have any Aegean Strike or Gulf Strike stories or strategies, please write a comment!  It would be great to hear from other fans of these games.