Over the past weekend, I went ahead and replayed  Scenario 5 (“The Horn of Africa”) from Gulf Strike again and I think I’m starting to understand it a little better.  Here are some random thoughts that occurred to me while playing it over: 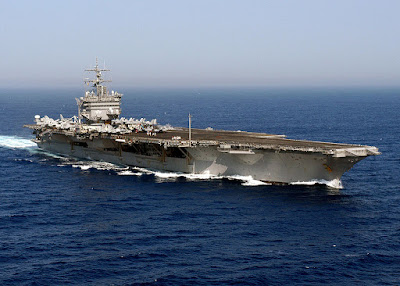 1.)  The Soviets and USA going to war over Somalia.  Really?  In hindsight, that seems pretty far-fetched.  In 1983, however, it must have seemed like potential flashpoints were everywhere.  I still remember this.

2.)  The Soviet CG tailing the US carrier group:  The Soviet player needs to be careful here.  Firing off at the carrier group right away as part of an interception in the First Action Stage’s Initiative player’s Movement Phase will certainly result in the US player unleashing B-52s against unprotected Soviet bomber bases in Afghanistan or near the Black Sea.   The Soviet player needs to air ferry his Tu-26 bombers to Yemen or Ethiopia before doing anything else in this scenario.  Remember that the Americans cannot attack the Soviets until they themselves are attacked.  The one big advantage the Russkies have in this scenario is that they can safely get all their pieces into place before making their big move so don’t blow it all on one impulsive attack in the first turn.

3)  The Soviets need to spread their bomber and fighter forces out evenly throughout the bases in Yemen and Ethiopia or they will get targeted and hit hard by those B-52s.

4)  The USS Kittyhawk can and should be used as an anti-Soviet naval death-dealing platform and it should stay near Diego Garcia and out of range of Soviet bombers.

5)  US priorities should be:  1.)  Destroy Soviet navy in following order of importance: a) submarines b) surface fleet  2.)  Destroy Soviet bomber bases in region  3.)  Bomb ground targets in Ethiopia attacking Somalia 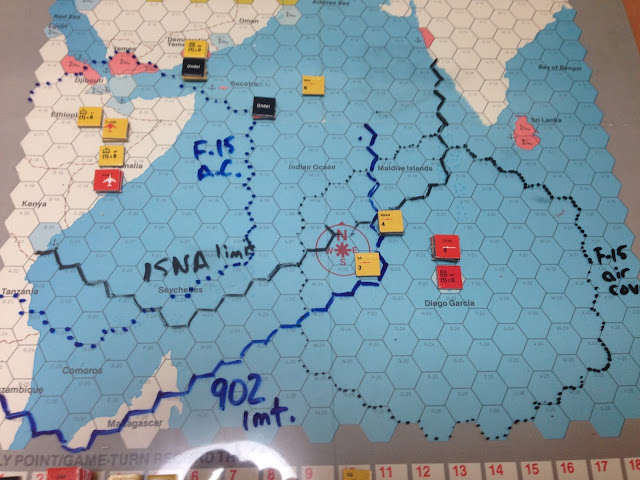 6)  Soviet priorities should be:  1.)  Keep US surface fleet bottled up near DG  (with air) or destroy it (with submarines) 2.)  Maintain existing forces in region with minimal damage 3.)  Destroy Diego Garcia with Soviet carrier and naval bombardment if possible (probably not possible unless the Soviets get really lucky).

7)  The Soviet CG at the beginning of the game is cannon fodder and the sole Soviet SSGN is the only real remaining threat to the US Kittyhawk outside of the Tu-26 bomber corridor.  The SSGN is better off trying to use hit and run tactics.  The Soviet CVH can provide air cover protection against P-3 Orions and S-3 Vikings.  As the Soviet player, I would do my utmost to try and keep that SSGN alive!  You’ll need it to help harass and/or sink the USS Enterprise when it arrives later in the scenario.

8)  The F-15s that come in as reinforcements in turn 2 should probably be put in Somalia.  Once they start working with the US carrier to provide air cover off the coast, they are basically unstoppable.   In the meantime, that base will become a target for Soviet bombers.  Keep your F-15s on Intercept until help arrives from CVN-65.

9)  The Soviet player has so many naval units reinforcing from the east during mid-game that I wonder if it would just be better to keep the Kittyhawk sitting near Diego Garcia to protect it while the Enterprise, the F-15s, and the B-52s go to town in bombing Africa.

10)  The B-52s are the true powerhouse behind the Americans in this scenario.  They have a high bombardment factor and are pretty much guaranteed to get 3 hits on something if they both hit the same target.  What’s more, they can fly on and off the board every turn so they aren’t vulnerable to Soviet base attacks like the Soviet bombers are.  Having to spread out the bomber forces in the region to avoid targeting by the B-52s ends up slightly diluting Soviet air power in the region.

Thanks again to Mark from The Boardgaming Life for the great advice and for keeping the Gulf Strike flame burning after all these years!