Scenario 2 from Fire Team is a lot more interesting than the first scenario in the game.  “Reconnaissance on the Nuremberg Highway” features an engagement between American scouts from 2ACR and the lead elements of Soviet 11th Guards Tank Division.  The Soviet player secretly chooses one of three available force compositions, each of which lead to different victory conditions for the Russian player.

The Soviets got activation next and activated the RPG team across the road from the Bradley in Ehrenberg.  I rolled a “2” and the Bradley was toast.

The Americans went next and sent the Bradley to the south over the crest of the hill to the south of Ehrenberg to get a better LOS on the Soviets. 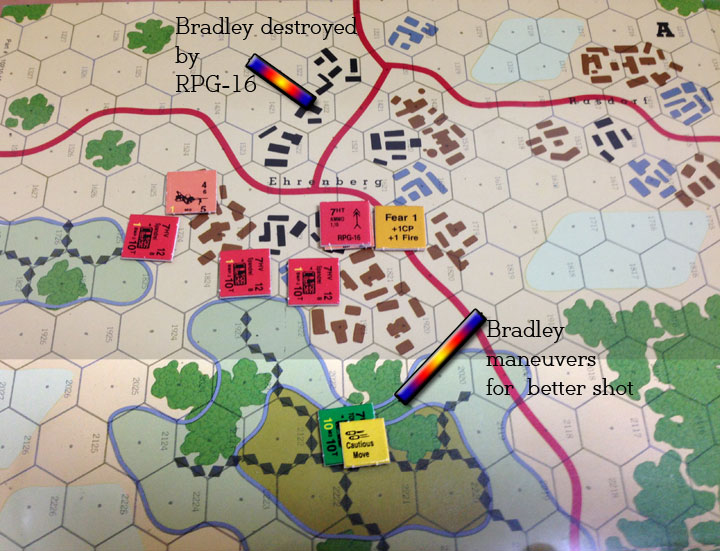 Next activation went to the Soviets and they managed to get the entire 2nd platoon going again.  This One of the BMPs drove north through a cluster of buildings using cautious movement.  The Bradley far away on the hill to the east fired a TOW missile and we rolled a “10”, which was a galling miss.  The vehicle sped through to the north and made its escape.  Soviet victory was now pretty much assured.  Another BMP from 2nd platoon scuttled through Ehrenberg and took opportunity fire from the Bradley on the hill directly to the south.  Another roll of “10” – unbelievable.  The TOW misses and the Soviets manage to get two vehicles from 2nd platoon off the board for a win.

As for 1st platoon, it ended the game still stuck on the east side of the board, having done its job as a decoy to keep the Americans guessing.  The Soviet player used them to good effect to drain the US player of important Command Points.  Well done for the Russians!