Well, it’s been a while since I’ve last posted here due to some major busy stuff going on in my life but rest assured, I have been gaming!  During January, I spent many hours learning the Next War system and playing through all the standard scenarios in Next War:  Korea.  I also got a start on an advanced scenario with all the bells and whistles, playing the first several turns of the Strategic Surprise scenario.

All I can say is, wow!  Next War: Korea with all the advanced rules is like a well-oiled and very complex machine that runs perfectly and is full of interesting decisions.  The use of Special Forces, airstrikes, detection, amphibious assaults, airborne drops, and ground combat all works together superbly to deliver a very tense game.  The Strategic Surprise scenario is incredibly tough for the ROK as the DPRK catches it unaware of a major invasion and launches attacks right out of the barracks, gambling everything for a quick takeover of South Korea.

The North Korean army is like a juggernaut and once they penetrate through the DMZ, the losses start to become overwhelming for the ROK and the US.  As the Americans and the ROK gain air superiority, lots of interesting options start opening up and I watched with glee as my A-10s launched interdiction strikes south of the 38th parallel in an attempt to delay the North Koreans just enough to buy time for the next trickle of reinforcements to arrive.  The North responded with chemical weapons and it was up to my F-18s to start hitting at chemical weapons factories north of the border.  Everything you do in the game has a major impact on play and seemingly small decisions in one turn can either help or hurt you badly later on.  Fun stuff!  I intend on trying this one later on and I’ve become deeply interested in the Next War: Taiwan game that has just been released by GMT. 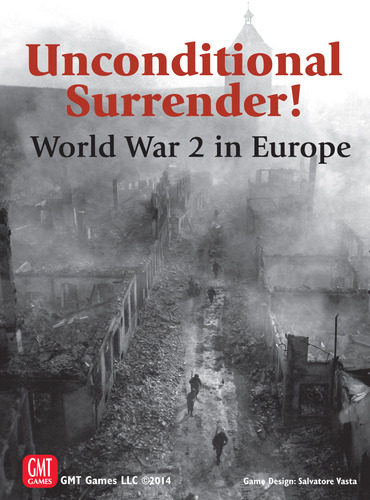 I recently bought yet another new game and have started to learn it by playing through the training scenarios.  Unconditional Surrender!  World War 2 in Europe is a strategic WW2 game by Salvatore Vasta and published last year by GMT.  Although this topic has been explored in many classics over the years (Third Reich, Hitler’s War, you name it), I didn’t actually have any games that covered the topic at this scale so it sparked my interest.  Most of the reviews that I read or watched used the word “elegant” to describe the system and I’m starting to see why.

The game happens at the army level and there are no combat factors or movement points on any of the units.  There is nothing to add up or subtract (except for a few die roll modifiers) nor are there combat ratios to figure out in combat.  Ground units get 8 movement points and tank movements get 10.  That’s it.  Air, naval, and ground actions can be taken in any order during a faction’s turn.  Each side gets events (ground support, surprise attacks, strategic movement) that can be played and used to help units get bonuses in combat or do special things like launch amphibious invasions or airdrops, etc.  Having only played a bit of the game, I can say that it’s very fluid and intuitive once you grasp the basics.  I’m looking forward to trying out the full campaign game in the near future.