Between the extreme of busy-ness of work and home right now, I’ve shoehorned in the time required to play about as much of it as I can at the moment.  Many games, you can sort of sit with for an hour or two after work and lose yourself in them despite being already tired.  Vietnam is not that kind of game.  It demands a lot from the player, both in terms of time committment and mental energy and if you don’t give it the right amount of time and concentration and respect, you’ll probably get burned pretty badly.  Rather than watch things degenerate into farce, I’ve decided to stop the game here and take stock of what happened.

To wrap things up, early 1966 started off with a failed NVA offensive against Saigon itself as two full divisions were repelled by American and SVN forces defending the capital.  The NVA units retreated north towards the border.  Over in Kontum in the interior, the 1st Cav moved in and started cleaning out the province of VC, although two regiments were known to be operating somewhere and Pleiku was still very much in the hands of numerous VC.  The ARVN were only effective in IV Corps and although they were trying their best, they simply didn’t have the manpower to effectively deal with all of the VC incursions coming from Cambodia while new VC units sprang up along the coast.

By the spring, things were looking dire.  South Vietnam suffered yet another coup, driving morale down even further.  The US was forced to throw in huge amounts of economic aid to keep the government and the people happy.  There was a tiny ray of hope after the ARVN Chief of Staff was finally replaced and a much more loyal commander was put in charge.  There were still several bad apples in the ARVN leadership but small victories like this really do tend to matter in the long haul.  I suspect though, that had I kept playing, SVN would have been prone to another two or three coups before slowly becoming politically stable.  I don’t think this would have happened in a short enough timeframe to make for a potential US-SVN victory.

American committment crept up past the 150 mark as more air power was thrown in to Vietnam.  With the bad spring weather, air power was hampered and not as effective in other seasons.  The VC were able to build two supply conduits in South Vietnam – one in IV Corps near the border with Cambodia and the other in Pleiku.

Elements of 1st Cav and the ROK forces worked together very well in the boundaries between III Corps and the area around Saigon, almost entirely clearing the region of VC.  In other good news for the American player, a huge Search and Destroy operation mounted against the VC holding out in Pleiku was incredibly successful.  Three VC battalions were destroyed and a regiment was sent fleeing west towards the border.  Pleiku was retaken and the VC supply conduit was destroyed.

The 1st Division sent a brigade of troops and artillery to start working in IV Corps and although they were able to retake one of the provincial capitals just west of Saigon, they too found the VC problem in the area to be largely insurmountable.  Much of the population in IV Corps was friendly to the VC or at least totally unsympathetic towards the SVN government.  It was starting to look like the area was a write-off, especially with so many VC battalions coming down the Ho Chi Minh trail and pouring into the area each season.  With the ARVN division ineffective this season, there was little to be done about it all.

Up near Da Nang, the 3rd Marines dealt a huge blow to the VC by trapping and destroying an entire regiment in the hills to the west.  By this time, much of the US air power and airmobility was spent and there was little else to do.  The VC licked their wounds and sent many of their forces into the countryside.  Clearly, the Americans were at their best when facing a concentrated force of enemies in a single location and the VC could no longer hope to forge strongholds in provincial capitals without losing them to US attacks.

By the end of the season, I was sure of two things.  The first was that the damage at this point was nearly irreversible in terms of losing popular support in key provinces and keeping SVN morale bouyant enough to turn the ARVN into an effective fighting force that could help assist the Americans.  No, the fighting and dying here was all done by the US and that would remain the same so long as South Vietnam was in the depths of political chaos.  Secondly, the VC had employed a questionable strategy by trying to take and hold provincial capitals by piling units into them and putting them in Hold operations.  The nature of the war would change into small-scale engagements in the countryside as the VC slowly turned the population’s loyalty towards North Vietnam instead of directly attempted to face down the Americans and ARVN.  To take care of this problem would require huge American committment and this would only increase morale for North Vietnam.

Here are a bunch of photos to try and explain as best as I can what I’ve written.  Sorry for the poor quality! 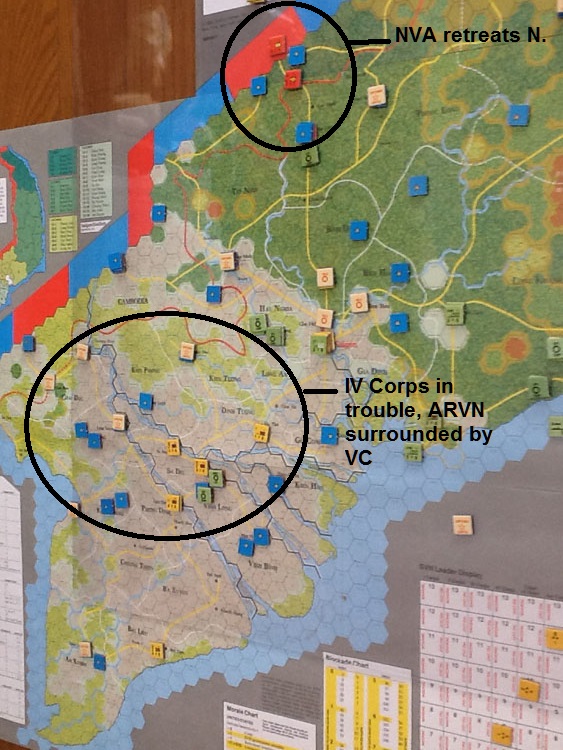 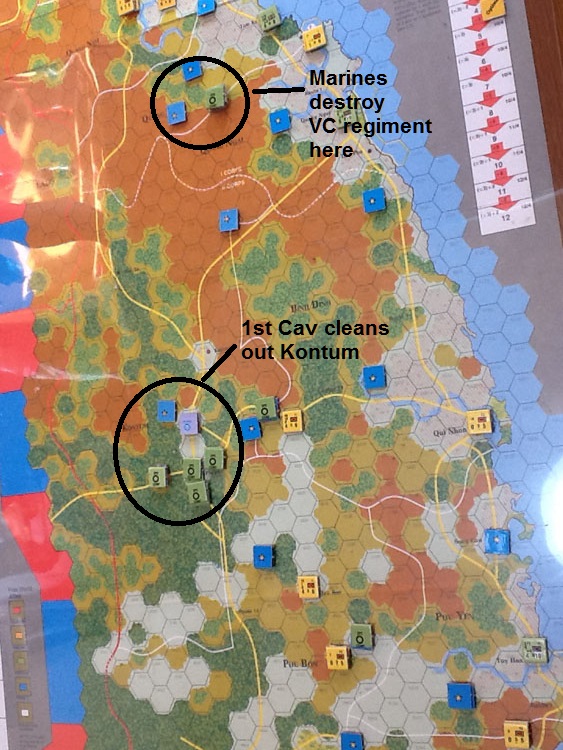 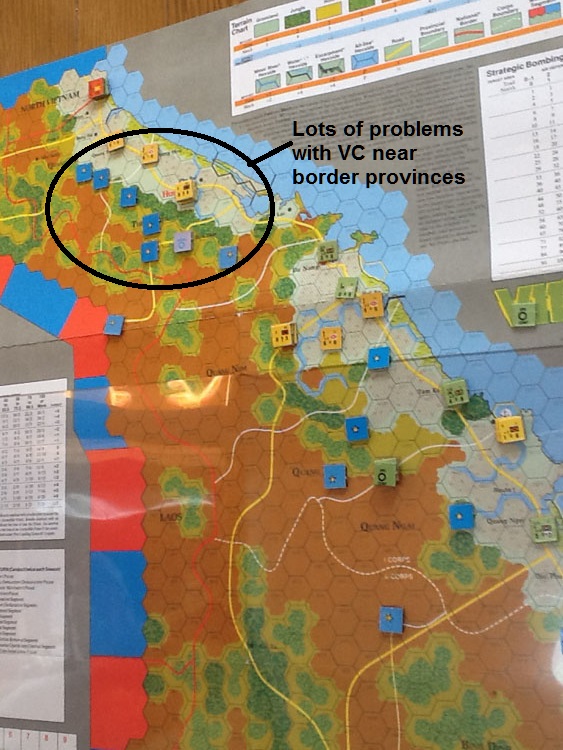 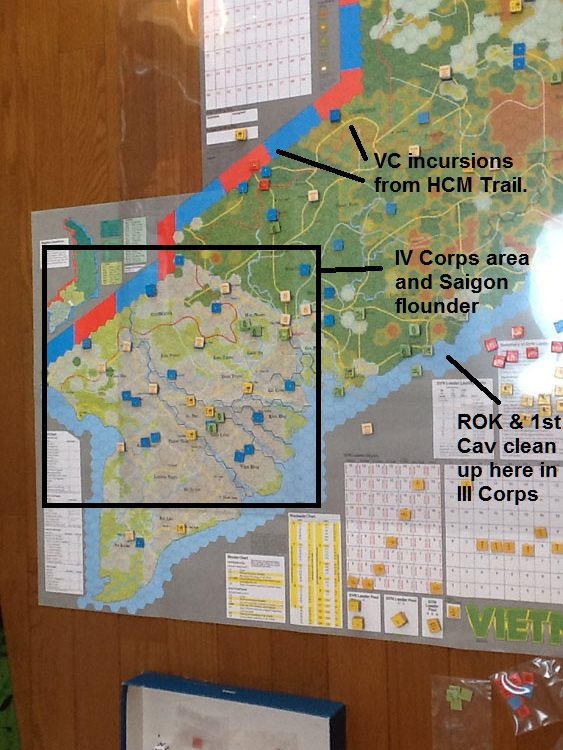 If I had to do things over again, as the US player, I would have given a much bigger commmittment than my initial brigades in the first year.  Although this may lead to a dangerous situation of over-commitment, it seems to make more sense to go big at the start and then slowly scale in troops as needed instead of trying to solve the problems by throwing in a brigade here and there once a season.  By trickling in forces over time, the VC player sees what the US is trying to do and just shifts their energy to another area of the country that’s not as well defended.  This creates a “whack-a-mole” approach to Vietnam and needless to say, it doesn’t work at all.

I’m going to put Vietnam away for now and I’ll come back to play it again some day.  I really enjoyed it for the time I had with it.  A lot of monster games can be dry academic exercises but I never felt that with Vietnam.  It is a proper wargame that tries well to reflect the realities of what politicians and military leaders were dealing with and although it’s not a really complex game, there are a lot of moving parts that make the game shine when you put it all together and see the result.