Disclaimer:  I have trouble finishing my breakfast so the prospect of finishing a full monster campaign game of Vietnam is pretty dim.  Some of you might ask, “Why even start then?”, which is a valid question but my only answer to that is, “I want to at least catch the flavor of the game and catch a glimpse of why so many people love it so much.”

Disclaimer #2:  I really have no idea what I’m doing here.  Really. I’ve played through one scenario (the first one) and now I’m on the campaign.

Sam & The Pharaohs have released their hit song “Wooly Bully”, which is climbing to the top of the American Hit 100 Chart, where it will sit for a week before being knocked off by “Help Me Rhonda”


NASA is about to launch Gemini 4 and the first space walk by an American is about to take place.

The Voting Rights Act of 1965 will be passed, a landmark piece of legislation during the Civil Rights Movement.

LBJ will announce an increase of 50,000 troops to Vietnam on June 28th.

With the setting established, here we go back in time together…

The 3rd and 4th US Marine Regiments deploy in Da Nang with their HQs.

The SVN draft 7 divisions from the population for a total of 91 supply points, leaving only 9 points left.  No idea if this is a good or bad thing.

Here’s how the placement breaks down from north to south.

5th Division and 2nd Division are set up basically as buffers against any NVA incursions.  They’re situated along the major routes going into South Vietnam.  5th Division is up in Quang Tri and Thua Thien with an HQ, arty, and a regiment sitting in Hue City.  2nd Division is further south in Quang Nam playing backup to the USMC 3rd and 4th regiment stationed in Da Nang.  Hopefully, the combination of these three forces working together in concert will be able to achieve something special.

This consists of three SVN divisions, the 18th, 7th, and 3rd,  Basically, there is a large chunk of South Vietnam that I’ve left between I and II Corps and this particularly worries me.  However, I wanted to really avoid spreading my ARVN out too thin.  The 18th Division is in charge of Binh Dinh while the 7th has small forces sitting in Phu Bon and Phu Yen province.  This leaves Kontum, Quang Tin, and Quang Ngai provinces without any ARVN troop presence. 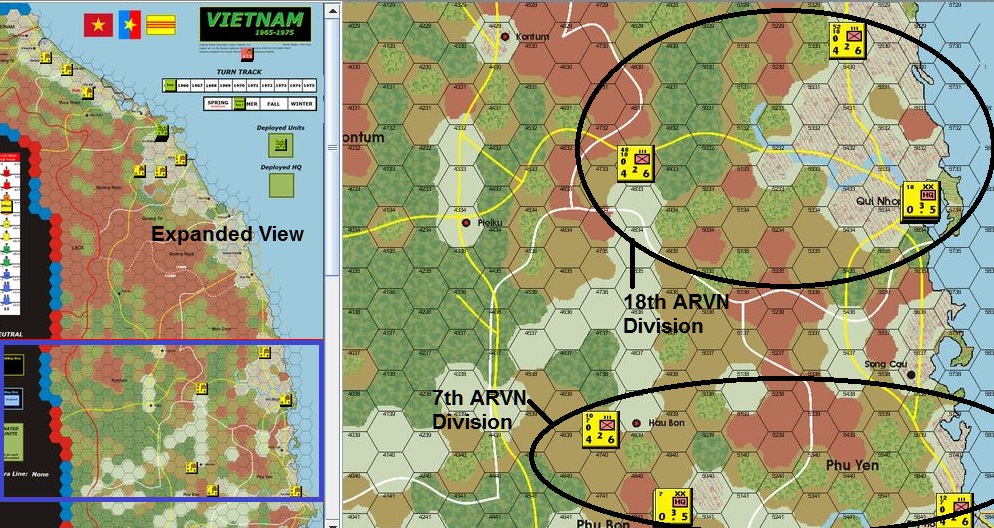 The 3rd ARVN Division is deployed a bit further south down the coast, mostly in Khan Hoa.  It’s starting to strike me just how much my deployment has avoided the rough terrain inland in favor of setting up near the coastline.  It seems that the inland areas will probably be prime areas for the VC to recruit and operate.

This consists entirely of 9th ARVN Division, which is situated in and around Saigon and Bien Hoa.  They’ll mostly be protecting the capital this summer.  I don’t plan on using them for any wild goose chases against the VC.

The final ARVN division is the 21st, which is deployed around the Mekong Delta, operating in the flatlands and swamps of three separate provinces, Phong Din, Sa Dec, and An Giang.  These guys are pretty much on their own and won’t be able to expect much help from III Corps.  Out of all the areas I’m worried about, this is the big one.  It seems like a perfect place for the VC to do their thing with relative impunity.

We draw our leaders for the South Vietnamese ARVN forces and here’s what we get:

2.  We get a bunch of real winners in our starting leadership pool for the ARVN spheres of command.  Looking at it, we have no less than three leaders whose loyalty is highly questionable and who the US will need to try and replace at the earliest possible moment.  This is alarming as it’s apparently the South Vietnamese Air Force and Navy commanders who are among the least loyal.  It’s a crying shame that the leader of II Corps is unhappy as he is easily one of my best commanders (and also in charge of three ARVN divisions).  The Chief of Staff is a bumbling fool who I can foresee having problems with in the near future unless I do something about it.  Luckily, we have passable leaders for III Corps and IV Corps who seem to be at least somewhat up for the job.  I can see a real mess looming ahead.

3.  The 1-star leaders of each division are a damn sight better than their superiors.  Most of the men are loyal (four of them at 10 loyalty and one at 9 loyalty rating) and competent soldiers, especially the leader of 9th Division.  The only real concerns here are 2nd division’s commander, who I’ll be trying to replace very soon.  I can also see a potential issue with the commander of 7th ARVN division, but we’ll let it go for now.

US morale is 520 and commitment is 25.  We have 21 air points, 2 airmobile points, 3 replacement points, and one cruiser.

We start off with all of the SVN provinces in the neutral range of population control so neither side has won any hearts and/or minds as of yet.

Well, that’s the SVN/US side set up!  I don’t know if I did well or not (and I’m not sure I care – I’m just really interested to see how it plays out). Next up comes the NLF player’s set up.  I’ll talk about that next time.  If you see any mistakes, please feel free to let me know!