Well, it’s been a little while since I’ve played a game of World at War and I thought I would get back to my roots this weekend and post a playthrough of a scenario from one of my favorite expansions – Counterattack.  This time we’ll be playing the first scenario of the Steckler campaign called “Little Red Riding Hood”.

This scenario features a battle between Task Force Eagle and elements of the Soviet Forward Security Element (FSE).  It takes place on Map W, a cozy little affair that comes with the Counterattack expansion.  There are a couple of interesting terrain features here like stone walls (that add a +1 defensive bonus for any fire that goes across them) and orchards, which offer some limited defensive terrain cover.   The Americans enter on the west side of the map from hex A9 while the Soviets can enter anywhere along the eastern side of the map.

Victory conditions:  The Americans want to take the three hamlets on the map while the Warsaw Pact wants to prevent this from happening.  The Americans score a total victory if they can nab all 3 villages by the end of turn 5, a significant victory with 2 hamlets and the Soviets score a win if the Americans can only grab one hamlet.

Setup:  There’s a lot of steel being committed by both sides here for such a small map.   The Soviets keep their T-64s stacked with the HQ while the US player spreads itself a bit thinner, opting to work with lone units instead of stacking them.  Steckler gets put with a Bradley and the infantry while the leader gets stacked with one of the Abrams.  For the Soviets, I wanted to pump up their infantry a bit too, so I stacked Volotov with an infantry unit loaded on the BMP-1. 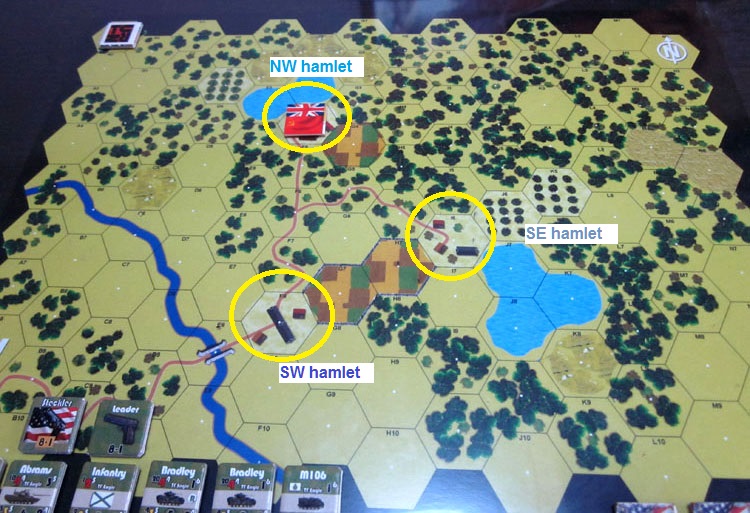 Turn 1:  TF Eagle goes first and pushes up along the road from A9, cross the bridge, and secures the southwestern hamlet.  The Soviets enter the board and move up their BMP loaded with infantry into the southeastern hamlet.  The T-64s get in position to cover the approach to the southeast hamlet and it looks like the rest of the Soviet forces are preparing to try and take the northwest hamlet next turn.

Turn 2:  The Americans go first and fire at the Soviet BMPs loaded with infantry in the southeast hamlet..  The BMP is destroyed but Volotov and the infantry survive and are now sitting in the hamlet, sad and disrupted.

The Americans send their HQ and a Bradley up north towards the northwest hamlet while an Abrams stacked with a leader covers the trail approaches to the east.  Steckler and his men are unloaded in the southwest hamlet with a Bradley sitting in the same hex to cover against any armor attacks.

The FSE gets a chit pull next and they send a small force (two T-64s w/ HQ and a BRDM-AT) through the woods towards the northwest village.  One hex of cultivated terrain is all that separates these guys from the American HQ and Abrams in hex F5.  Talk about close combat! 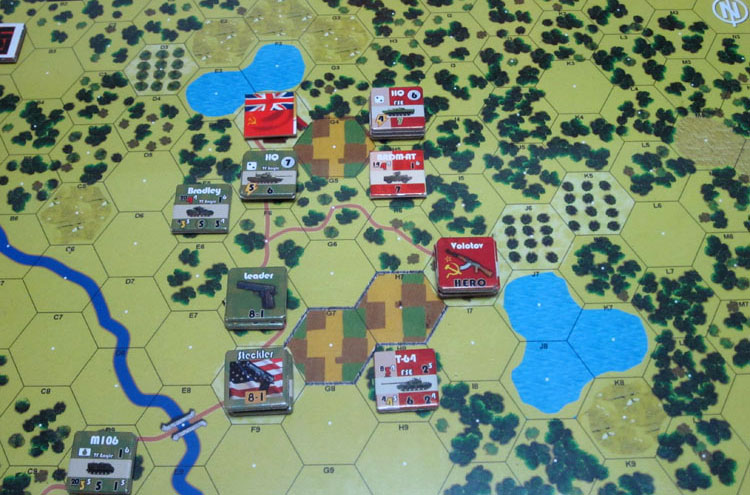 Turn 3:  No chits are pulled for either side here.

Turn 4:  Time is running short and neither side has claimed the northwest hamlet in F4.  Americans get the first chit and take a couple of ineffective shots against the T-64 way down south and the Soviet infantry in the southeast hamlet.  Even the Abrams stacked with an HQ fails to do much against the Soviet tanks stacked with their HQ.  In frustration, the Bradley platoon is sent in alone to claim the hamlet in F4 and an event occurs.  The Soviet BRDM-AT tries to hit the Bradley platoon but does little except disrupt it.

The FSE now has a go and Volotov and his infantry manage to reduce and disrupt the Abrams stacked with the leader in F7.  The T-64 fires at Steckler and the infantry sitting in the hamlet in F8 but fail to score any hits.

The BRDM-AT fires at the American HQ and Abrams unit but misses completely and is marked Ammo Depleted (AAARGGH!).  The Soviets decide to just go for broke and send in their two full platoons of T-64s stacked with the HQ against the lone Bradley platoon in the northwest hamlet.  It seems like a sure thing but nope!  The Bradley takes only one disruption while the Soviet units take a disruption each in what must have been the most incompetent assault on a village ever undertaken.  The frustration mounts for the Russians.

Turn 5:  The Americans decide to just cling on here and inflict some damage on the Soviets.  The main priority is to keep the Soviets near the northwest hamlet from regrouping and assaulting the lone BMP again.  The HQ and Abrams in F5 destroy one of the Soviet T-64 platoons stacked with the HQ.  The Bradley is disrupted and cannot fire.  If the Soviets get a chit pull and undisrupt, the Americans will be alone and in real trouble against another assault.

Meanwhile down south, there’s yet more ineffective fire from Steckler and his men, who fire off some Dragons at the T-64 in the nearby woods and then call in artillery on Volotov.  All of it misses and the Soviets are left sitting pretty.

With one end turn marker already pulled, there was a 50/50 chance for an FSE chit pull but fate had other plans for the Soviets and the next end turn marker got pulled.  End result:  The Americans won this one with a significant victory (two hamlets held).

Conclusion:  What can I say?  This was a real nail-biter.  The close nature of the combat ended up really limiting how each unit moved and fought.  Everyone was always in striking range of each other and opportunity fire was a constant threat.  There was just nowhere for anybody to hide while still taking their objectives.  I’d like to say this was just bad luck for the Soviets but I felt the T-64 down south could have been used to better effect.  By mid-game, it seemed reasonable to assume that the Americans had just left a skeleton force to hold the southwest hamlet and a well-timed push towards it with tanks and infantry may have been enough to force the US player to withdraw some of his forces from the northwestern hamlet. In this scenario, you’ve basically got to push your guys the entire time and just take chances, especially with the single chit for each side in the cup.  Conservative play here by the Soviets will probably get them into trouble with this scenario.