Okay, before we get rolling on this playthrough of Firepower, let me set the scene here and describe the background.

First off, I decided to try and make a mission that had the same flavor of a cheesy ’80s action movie where a special elite force of bad-asses takes on a greater number of enemy soldiers.  Unlike the movies, however, I have no idea how this one will turn out in the end.

In the mid-1980s, Iran and Libya often served as the perennial favorite when Hollywood movie script writers needed bad guy terrorists.  For good examples of this, see the movies “Delta Force” and “Iron Eagle” and the very first episode of “Airwolf” (and countless others).  So I’ve tried to set a scenario in Libya where a small American special forces squad has to rescue two downed American pilots in a fictional rescue mission.

The Americans must penetrate a camp set up on the south edge of the playing area.  Here’s the layout: 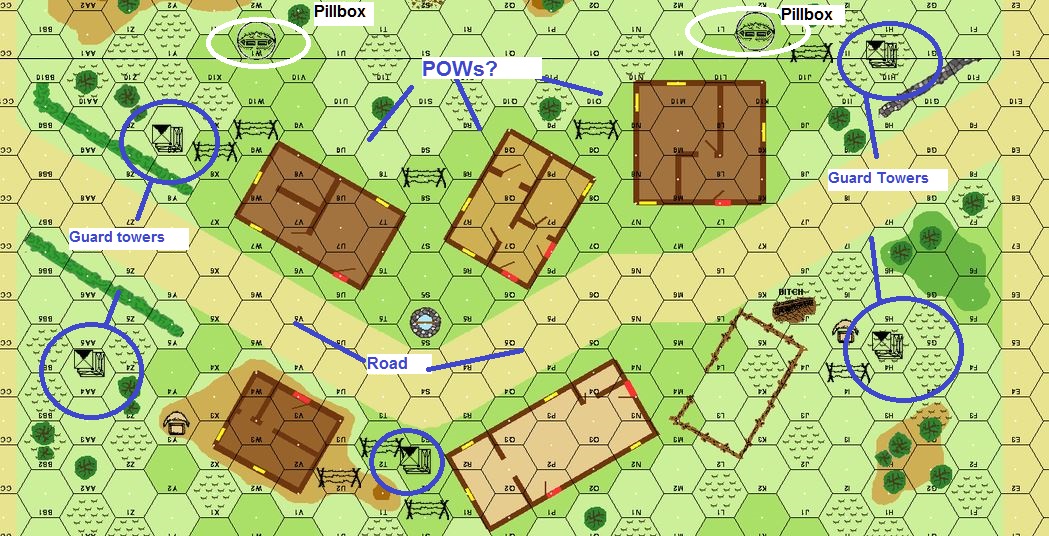 The camp is located on a rocky outcropping in the middle of the desert with three buildings on the north side of a road running east to west, one of which has the POWs.  Two buildings and a fence are on the south side.  There are five watchtowers around the perimeter of the camp and barbed wire protecting it with two pillboxes on the north edge of the camp, overlooking a sheer rock drop to the sandy desert below.

To the north of the camp are several dunes (the “hills” on the south side of the map do not exist) and there are two gravel roads that run on either side of the map down towards the POW camp.  The Americans will enter from this map and need to infiltrate the camp, find the two hostages, and get out.

The Libyans have two squads of five men each at the camp.  Because they are unaware of the American presence, the camp is on low alert and only one guard occupies each tower while the rest of the guards mill about attending to their duties.  For this reason, the Americans will get automatic chit pulls for the first two rounds of combat, simulating the element of surprise.

The US Special Forces guys are amped up quite a bit to make it a little more even.  They also have an M-113 at their disposal (although the Libyans have two guys with RPG-2 launchers in the camp).

Here’s a breakdown of the US Special Forces squad’s stats.  I followed the stats for the American Green Beret (A Team) squad as outlined on page 20 of the Battle Manual and reduced the strength by three in order to make up for the presence of an M-113 APC.

Analysis:  McCreary is the natural leader of the squad, with experience and motivation both at level 9.  He’s quick to rebound from taking hits or losses while in a fight and he has excellent reflexes that give him great reaction time.  He has a Constitution of III, which means could mean that he might even be able to fight through some wounds.

Analysis:  Smith has low experience but good motivation and excellent constitution.  What’s more, he has a Speed value of 5. This makes him an excellent “grunt” who will be able to get the job done in a good amount of time in a fight.

Analysis:  I suppose with his experience of 7 and motivation of 1, Jensen could be considered the “burnt out vet” of the group.  He’s probably seen a little too much action and although he’s fast, the low motivation will mean that he’ll break easy if things start going south for the squad.

Analysis:  Collier is the heavy weapons guy in the group with an M-60 LMG at his disposal.  Everything about his stats makes him quite average but it’s good to assign someone dependable to a support weapon.

Analysis:  Franks is an excellent sniper who works alone and his above average stats shows that he’s well suited to working far off from the rest of the group in a sniping capacity.  His rifle stats are +1, which gives him a bonus to hitting.

Analysis:  Tommasen works well as a high experience and high motivaton guy and he probably could have been squad or assistant squad leader except that his combat stats were so high (RFL +1, LMG +1, GL +1) that I didn’t want to have him standing around giving orders.  I want him right there in the fight so I assigned him the M16 w/ M203 grenade launcher.

Analysis:  Another burnt-out combat vet, Laroque has a low motivation, which might hurt him but what’s more, he has a low strength and constitution score.  He’s a bit of a liability here but I have plans for him that take this into account.

Analysis:  Vincent is well-rounded and has the experience here to do well.  He also has enough speed that he can run around the battlefield directing his men when he needs to.  This should come in handy if the squad gets into a real jam.  Although he’s only armed with a pistol, I don’t intend to use him much for combat but only for leading.

With a high move factor and a low target size, this may be our best bet to getting the guys right inside the Libyan’s POW camp as fast as possible.  Unfortunately, with a front armor of only 3 and side/rear armor factor of 2, this means that these guys are toast if the APC gets hit with an RPG. On the bright side, “The Hawg” has a .50 cal mounted on the top and a smoke projector that can be used to create lots of confusion for the enemy in the initial stages of the fight.  I’ll have Laroque manning the .50 throughout the battle and Jensen as the driver.  With low motivation scores, it might be a good idea to keep these guys wrapped up in armor so they don’t break so easily if things go bad.

Alright, with the setup out of the way, it’s time to get playing!  My next post will deal with how it all goes down.  The first time I played this scenario last week, the Americans barely managed to win but took quite a few casualties in the process.  I have no idea how things will go this time.