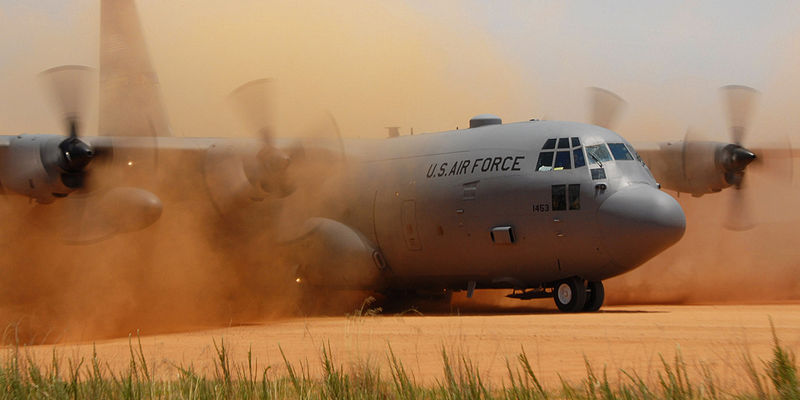 McCreary shielded his eyes from the unflinching midday heat of the desert sun as the ramp of the C-130 fell down in front of him.  “Alright, let’s get this piece a’ shit off-loaded!” he yelled above the sound of the big transport plane’s engines.  His squad had all of 10 minutes to get the M-113 out the back of the Herc and then wait for B squad to arrive in their C-130 and do the same.  It was fine with him.  Most of the time spent running up to this mission had been spent waiting for things to happen.  He’d gotten used to it but the younger ones in the squad got bored easily and bored soldiers – even elite soldiers – quickly became unpredictable when they were bored.

A few minutes later, the M-113 had trundled out the back of the C-130 and he could hear the engines of the transport revving up, preparing to take off from this sandy strip in the middle of enemy territory.  The big JATO jets strapped to the plane started to whine.

McCreary let his mind wander to the coming mission.  It was simple.  Two American pilots had gotten themselves shot down three days ago while bombing Tripoli and his men were to rescue them at all costs.  He specifically remembered those words in the briefing:  “AT ALL COSTS”.  McCreary couldn’t help but smirk.  “Whose costs?  Ours,” he wanted to say then.  But he didn’t.  And now they were here.  He started to think about the million tasks that his Special Forces team needed to get done.  No matter how many he could think of, there would always be more.

A voice jarred him back to life.

“El-tee,” he heard Collier say in his thick southern drawl.  “Loo-tennat Mah-creeree,” Collier repeated, this time louder.  “We’ve got the radio beacon workin’ for the other Herc but we got no answer.  No answer,” he repeated in a worried tone.

McCreary turned back to Collier, “Any word from Eagle One?” he asked.

Collier shook his head.  “I’ve had Franks on the scrambled since we got the ’13 out the plane.  They said it should be here by now, circling right above our heads.”

McCreary turned his gaze up towards the sky, his gloved hand trying in vain to see into the glare and pick out the speck in the dazzling blue.  He turned to Collier to say something and suddenly heard the low hum from just beyond the dune to the north.  He grinned and called to the rest of the team to prepare the landing strip for the rest of the team.  A dull thud hammered on the nearby dune and suddenly the world turned to fire and he was knocked backwards.

When he opened his eyes, he could only see the wall of debris hurled towards him.  Although it must have happened in less than a split second, he swore he could identify each deadly chunk as it flew past him –  an engine part, a propeller, a window pane, a hydraulic lever, a door.

Miraculously no one in his squad. A few men went over the big dune to examine the wreckage but came back in a few minutes looking forlorn and shaking their heads.  Apparently, it was not even worth picking through the debris.  No survivors from B team.

“Collier, get Franks on the horn to Eagle One and tell them we’ve lost the other Herc.  Tell ’em we’re aborting and need a pick up,” McCreary said after a long silence.

A few minutes later, Franks turned up in front of McCreary.  “Sir, we can’t raise Eagle One on the scrambled freq.  I think the radio’s dead.  What do we do?”

McCreary found Vincent, his Assistant Squad Leader, a tall, lanky, and effervescent young man from Michigan who looked more like he should be working at a used car dealership than standing here in a Green Beret outfit in the desert.  After 10 minutes, the two men came to a quick agreement.

“Alright gentlemen,” they announced to their assembled squad who stood in front of the M-113.  “We know this won’t be easy but we’ve never backed away from a challenge yet.  We’ve got the location of the prison camp.  We have a working vehicle and what’s more – we have the element of surprise working for us.  We won’t get another chance at this.  Let’s rescue those prisoners.”

The men got together in a huddle as McCreary and Vincent stepped through the new plan with the men.  It was a bad plan but everyone was on board.  McCreary knew they were never coming back.  His head filled up over and over again with those three fateful words from the briefing.