“Operation Starlite” is the first scenario for Victory Games’ Vietnam: 1965 – 1975 (1984).  The scenario is based on the historical battle between the Vietcong and the United States Marine Corps in the province of Quang Ngai in August 1965.  It marked a significant point in the beginning of the war as the battle here was the first wholly American effort of this size.  Through some clever planning and careful coordination among air, naval, and ground forces, the Americans held the initiative in the battle and delivered a significant blow to the 1st VC Regiment by the end of the operation. 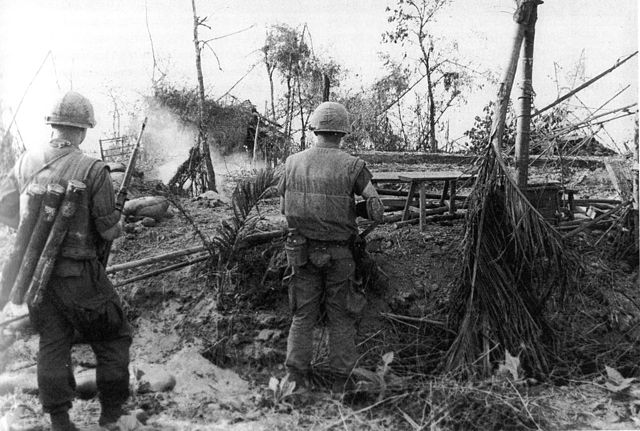 This particular scenario allows the players to examine the “what if” situation where the VC get a little more time to get out of the Americans’ way at the start.  The VC player has two units in this short scenario – a Political Section and a VC regiment.  The American player gets the 7th Marines (Regimental HQ and 3/7) along with the 3rd Marines (both the 3/3 and 2/4) and a battalion from the 2/12 Marine Artillery Regiment.

The 3rd Marines with the 2/12 artillery start off in the port at 5118 right near the city of Chu Lai (which would later become a major Marine base in the area).  The 1st Marines start off just north of Quang Ngai in 5220.

The VC can deploy in either 5219 or 5320.  I’ve decided to place both units in 5219 to get them a little further from the coast and give them a slightly better chance at escape.

The plan here is for the US player to conduct a Search and Destroy operation against the VC. The terrain around here consists of roads and cultivated hexes, which is easy enough to move through (cost of 1 MP for foot).  Over to the west, it starts getting mountainous with some forested hills and a bit of jungle.  If the VC can be prevented from getting into this tougher terrain, the US will probably do just fine here.  The US player has some air (4 points) and naval gunfire (6 points from a cruiser), which will probably be used for interdiction to help keep the VC from getting too far away.

The NLF player simply wants his VC regiment to survive.  The scenario only lasts one turn so this is really a situation where the VC will just be evading the US efforts for as long as humanly possible.  The Political Section may need to be sacrificed to keep the regiment from being targeted.  In this game, the VC playing pieces are kept face down so the US player never quite knows what he’s going to find until he hunts down a VC unit and the fight begins in earnest.

I’m going to walk through the opening moves of the scenario slowly because I’m rather new to the game and this will help me to learn it.  It might also help to give you an idea of how the game works if you’ve never played it.

We start off with the support phase and note the levels of support available for the US player.  As stated before, we’ve got the cruiser, 4 air points, and 1 airmobile point.  We also have 4 replacement points in case we take any losses with our Marine ground units.

Next is the Special Operations Designation Phase where either side can opt to put their units on hold or patrol operations.  Neither player chooses to do so.

After that is the Strategic Movement Phase.  Both sides can choose to move their units very long distances in this phase but since we’re focused on one province here, there are no other units to pull in from other areas of the country.

The next step is the Operations Phase.  This is really the heart of the game.  Both players get a chance to assign their units to an operation such as Search and Destroy, Clear and Secure, Bombardment, etc.  The NLF (National Liberation Front) player gets to choose whether he or the US player will go first here.  Since the VC are trying to get away from an overwhelmingly large US force, it would be a good idea for the NLF to go first and try to escape.

The NLF decides to assign the VC to a Search and Destroy operation (assigned to a notional target – this really just gets them moving away from the Americans within the parameters of the game and scenario).  The VC units have only 4 movement points (down from their usual 6 MPs) due to the fact that they are not used to the fast reaction time of the Americans.  One of the units moves to 5019 while the other goes to 5020.  The NLF gives the operations over to the American player.

US Search and Destroy

Now the American player declares a Search and Destroy operation and attempts to find and eliminate the  VC regiment operating in the area. The 3/3 Marines and the 2/12 arty are assigned to the operation.  The target hex will be 5019, since it’s closest to our operating American units.  So whatever is sitting in 5019, be it a tiny helpless political support unit or an entire regiment is going to be our target unit.

The first thing the American player needs to do is declare any support that he will use in the operation.  Since we don’t know yet what we’re really dealing with in terms of enemy unit strength, we’ll wait until next round to use the support.

The 3/3 Marines move southwest of their current position and end up in the same hex as the mystery VC unit.  A couple of things now happen and this illustrates the reactive and fluid nature of the game’s mechanics.

First of all, the VC in the non-target hex gets a reaction move at its full MP allowance since an enemy unit ended its movement adjacent to it.

Now the Americans get to add in some offensive interdiction.  The 2/12 artillery fires on the 5019 hex.  The arty has a firepower of 7, but this is reduced to 3.5 because this province is not a free-fire zone.  The result is that an interdiction marker of “1” is placed on 5019.  As a result, leaving the hex will require +1 MP for all units (even friendly ones).

The VC and Alert Movement

The VC in 5019 now get an alert roll, which may allow them to move out of the hex and escape from the 3/3 Marines.  The Movement Points available to an alert unit are determined by a straight d6 roll added to the Movement Point requirement for the terrain in which the unit is currently sitting.  If there were ARVN units involved in the attack, the VC would get a +1 bonus, which is how the game reflects how the VC had thoroughly infiltrated the ARVN units during the war.  We roll a “2” and add it to the “1” for cultivated hex and the final Alert MP is a 3.

Normally, the VC could move out of the enemy occupied hex by paying 2 MPs in 5019 and entering the cultivated hex in 5120 for 1 MP (a total of 3 MP).  However, the interdiction artillery mission tacks on an extra 1 MP to leave 5019, which makes moving away from the American unit impossible.  The VC could disperse at this point, simply evaporating into the surrounding countryside and avoiding a fight altogether but in this scenario, that would mean a US win.  So the VC unit is pinned down and must fight the Americans.

And behind door number 3…

Now we reveal the VC unit in the hex.  I’m playing this solitaire so I’m going to randomly determine which unit it is by just rolling a die.  1-3 is the regiment, 4-6 is the political section.  We get a 6 so the 3/3 Marines eliminate the VC political section.  The operation ends.  The interdiction marker in 5019 is removed.  The 3/3 and the artillery is declared ops complete.

Now it’s time to get that lone VC regiment operating to the west!  I’ll be updating shortly with the results.  If any of you veteran Vietnam players see any mistakes, please let me know in the comments!  Thanks for reading.