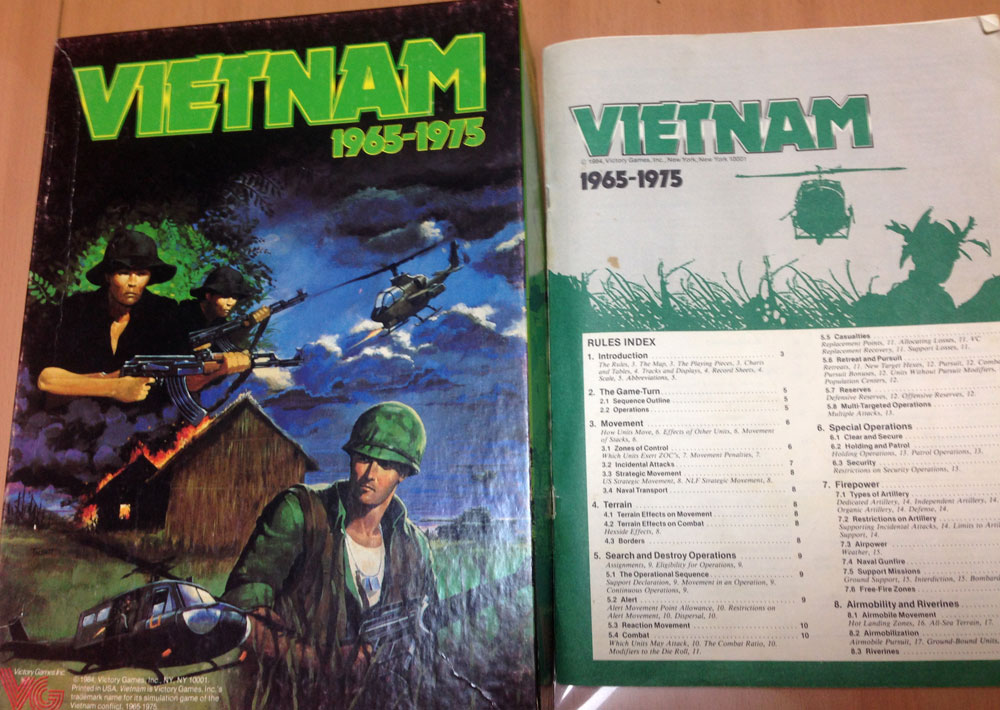 Well, this thing just arrived the other day.

Nick Karp’s Vietnam: 1965 – 1975 was published by Victory Games and released in 1984.  Although I’ve never played it and I haven’t really even done more than scan the rulebook, I’ve read lots about it.  The game is a faithful attempt to model the political and military involvement of the United States during the entirety of the American major involvement in the Vietnam conflict and it features a huge monster of a campaign game (although there are smaller scenarios in there too).

Mr. Karp started out as a playtester for SPI in his youth and went on to design this game during his university studies (Holy crap, now I realize that I have done NOTHING with my life).   If that doesn’t impress you enough, the game won the 1984 Charles S. Roberts Best Twentieth Century Game award.  The artists, Ted Koller and James Talbot, did a wonderful job with the game’s presentation and helped the game to garner another Charles S. Roberts award for Best Graphical Presentation.

What I find even more amazing about this game is that it was one of the first of its kind to try and deal with the overarching military and political complexities of the Vietnam War – a complex and controversial topic, to say the least.

“You know if we’d lost here in Vietnam, I think it might’ve driven us crazy. Y’know, as a country.” – Eddie Blake, Watchmen

This game came out right at the same time as the Vietnam War was being reappraised in American media, politics, and popular culture.   Despite the release of a few games about Vietnam prior to this one (Grunt and Year of the Rat, for example), I don’t think Nick Karp’s Vietnam 1965 – 1975 would have seen the light of day – never mind win two major awards – if it had been designed in the late 1970s.  This was a much more extensive and sobering look at the grim complexities of fighting a ten year long war in Vietnam so the game and its cultural context are inseparable. 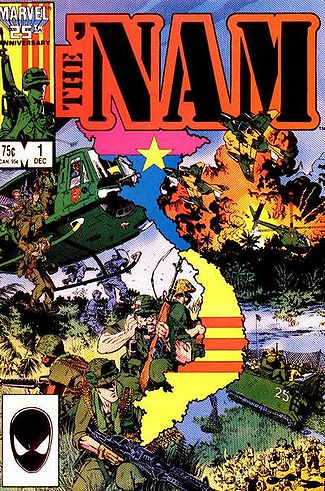 The game’s release was just one of many signifiers that enough time and emotional distance from the war had made it possible for a study of the topic matter through games, movies (Platoon, Full Metal Jacket), television (Tour of Duty, China Beach), comics (Marvel’s “The ‘Nam”), books (Stanley Karnow’s Vietnam:  A History), and novels (Leonard Scott’s Charlie Mike).  Sure, some of these attempts to deal with the war were clumsy but it was a start.  Karp’s game, however, was anything but ham-fisted in its examination of the war.

Vietnam 1965 – 1975 was a very unique wargame at the time of its release.  A large part of the game deals with not only fighting your enemies but also winning and retaining the “hearts and minds” of the Vietnamese people.  With this in mind, the player’s attempts to resolve political and military dilemmas are a huge part of the game.  For example, you can declare an area as a “Free Fire” zone for your artillery and air missions and it will help immensely in combat situations but with the drawback that you will likely lose the support of the hapless civilians who get caught in the midst of all that massive firepower. Games like Fire in the Lake and Hearts and Minds are more recent examples of this kind of approach although I haven’t played them before so I have no idea as to whether or not these attempts were successful.

The campaign game features things like coups and attempts to loosely model ARVN leadership through individual ratings for each South Vietnamese general.  You may get a general who is extremely loyal to the American cause but totally ineffective at leading troops or you may have the opposite.  Which kind of leader do you hang on to?  This will have huge effects on your operations.  Do you authorize the bombing of North Vietnam in an unrestricted manner and take a morale hit across the board?  Do you throw in massive amounts of supplies to build a series of walls and listening posts as part of the McNamara Line?  It could be a complete waste or it might actually help turn the tide in your favor.

I’m looking forward to eventually getting this thing out and playing it in the near future.  I played through a couple of examples tonight but to be honest, my brain feels a bit overwhelmed at the moment after having just learned the very basics of Gulf Strike.  However, I hope to have something about Vietnam to you in a short time so please stay tuned.

For an excellent interview with Mr. Karp about Vietnam 1965 – 1975, please check out this episode of Guns, Dice, Butter.