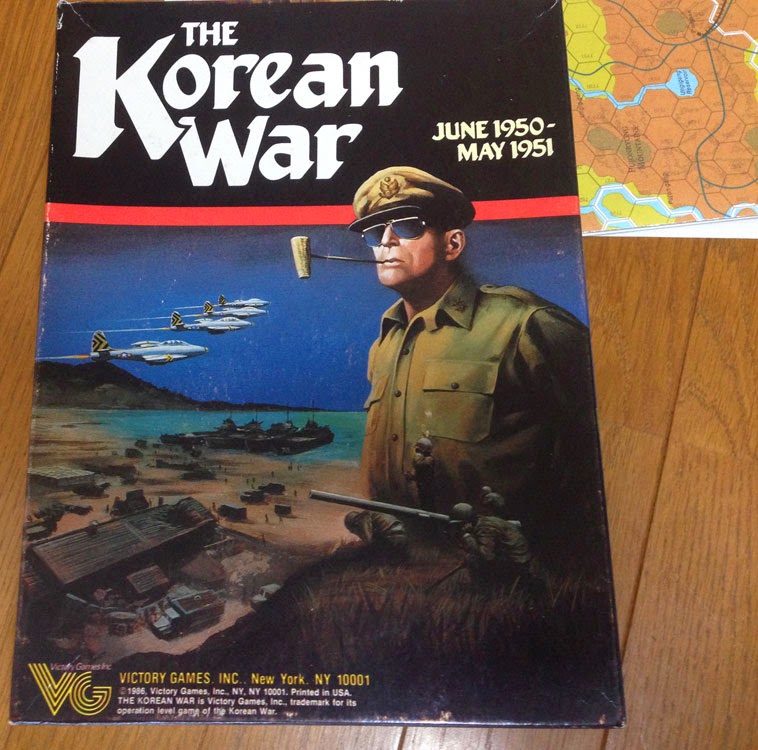 I recently got hold of VG’s The Korean War (1986) and I can honestly say that I’m blown away by the quality of this game.  I’m not sure I’ve ever played a game where the rules were so intuitive and yet so perfectly tailored to model the kind of conflict that the Korean War really was.

Designed by Joseph Balkoski (who also designed several games in VG’s Fleet series along with many other games), The Korean War lets you play out the first year of the conflict from June 1950 through May 1951.  There are four basic scenarios that take you carefully through the different stages of the war and these generally run four or five turns (one turn is one month in game time).  The rules are introduced in a really gradual way and although they aren’t that complex, it does take a little while to get used to the various phases and patterns of each game turn.

After you’ve got all that down, there’s a full campaign game with all the bells and whistles.  The campaign incorporates rules for everything from UN commitment levels to global tension.  If you’re not careful as the UN player, you can spark World War III (upon which the game ends and the UN player automatically loses).  Also, your decisions can also result in Chinese intervention, just like in real life, and you can watch your close victory turn into a bitter stalemate as your troops get pushed back towards the 38th parallel.  On the other hand, if you don’t push things enough, you face the real possibility of the North Koreans overrunning the south and ending up with the entire peninsula under the control of deranged fat guys with bad haircuts having the run of the place for the next half century or more.  There are lots of intriguing choices and circumstances can easily push the UN commander to gamble with risky decisions that may either pay off or end up in total disaster.

In terms of the real meat of the game, there are lots of interesting decisions to make and all of them feel vital.  For one, combat strength is partly based on how far your units are from their supply depots so you have to think carefully about how much of your limited resources you want to commit on a given push.  Reinforcements come in each turn and you can either get them on the board right away (in Pusan) or you can delay entry and try out an amphibious landing (much like the famous Incheon landing) to try and cut off North Korean supplies and really let the UN guys go at them.  You also get air units each turn and you have to decide whether you want to put them on interdiction or close air support missions and this kind of decision can drastically alter the game.

The game mechanics are really interesting too.  There are two action phases in a turn and each of these has an operations impulse where the fighting and movement take place on the board.  Each side goes back and forth taking turns rolling for their available operation points (this is based on supply) and then performing actions with their units.  You can spend your action points on a units to make them do various things: attack, move, etc.  Units get 3 action points and the player can decide to spend all 3 points to make a really big attack with a unit (getting a big modifier on their attack roll) or perform a strategic move (giving them 12 movement points).  You can also spend your action points on a unit to make it do a mixture of things, such as a normal move (1 action point, 4 MPs), normal attack (1 action point, no bonus modifiers), and then move again (1 action point, 4 MPs).  There are lots of intermediate options too such as an 8 MP move and then a normal attack.

Combat is a treat and flows easily.  Air and armor are treated as assets for units and works alongside combat units to provide enhanced attacks.  Inactive units that are adjacent to enemy units that are being attacked by an active unit also participate in the attack without any penalty.  Finally, instead of having a million different modifiers for different terrain, you’re rolling on a CRT that simply has two columns: attacks vs units in clear terrain or non-clear terrain.  I can’t tell you how much time that saves and how that keeps the game flowing smoothly when calculating and determining combat results.  It keeps the game going and prevents things from bogging down.  I noticed this was a key element for me as I usually get bored of games very quickly with lots of different CRTs and terrain modifiers but I never once felt that way when playing this game.

The components are quite nice for a board game produced in 1986.  The map is wonderfully illustrated and it’s easy to make out all the key terrain types, roads, railroads, and towns in the game.  There are two large maps.  One map depicts the area around the 38th parallel down towards the tip of South Korea while the northern map encompasses all of North Korea and bits of the area around the border with China past the Yalu River.  There are boxes on the map board that cover all the mechanics of play (initiative, operation tracks, action points, reinforcement boxes) and a separate air chart that allows you figure out where you’ll be assigning your air units in the various provinces of Korea on interdiction missions.  A small booklet with player aids gives you all the charts and tables you need to reference in a very nicely laid out and easy to read form of presentation.  It’s clear that whoever made this thing had the player in mind rather than the layout artist.

So all of these things come together to produce a real winner of a game and even if you aren’t particularly interested in the Korean conflict, I think this game will please most gamers.  As a wargamer with modern tastes, the Korean War was not something I was particularly interested in as I believed it lacked the epic scale of World War II and the “rock ‘n roll” flavor of the Vietnam War.  I have to say that this game has converted me.  There’s so much flavor that’s represented in this game that allows you to see how really desperate the situation became for everyone involved at various points during the war and how key decisions formed and shaped the outcome of the entire conflict.  I can’t recommend this game enough.