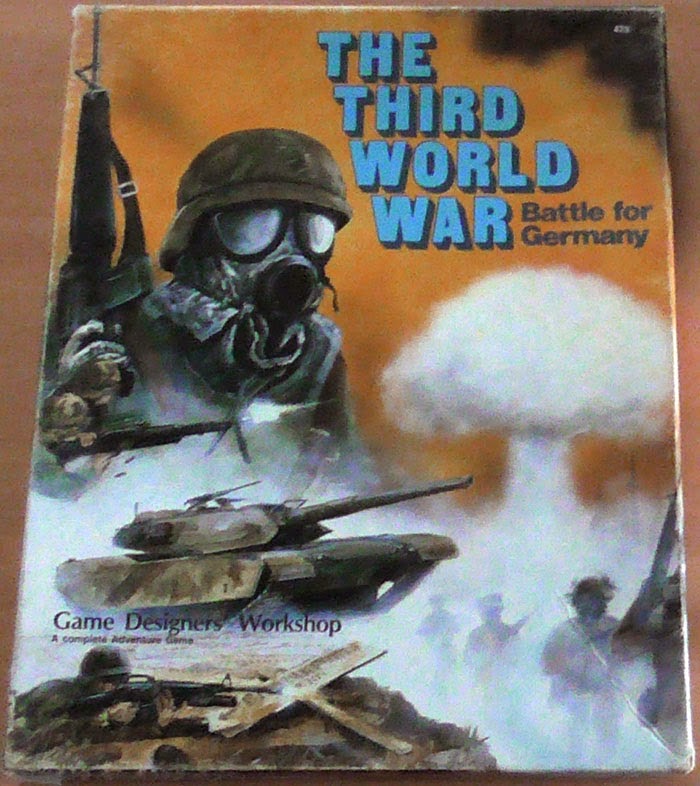 Slowly but surely, I got halfway through a recent game of GDW’s The Third World War:  Battle for Germany to see things bog down into a stalemate by the beginning of turn 5.  NATO’s defense was sub-par due to its lack of depth and inability to cut through the Soviet breakthrough in the middle of the board.

The Soviets, on the other hand, were unable to follow up their early successes with further breakthroughs and by the time, they got within spitting distance of the Rhine, the front line had bogged down as a motley collection of heavily disrupted units were unable to make the final push.

In the early game, the Soviets had an overwhelming success by clearing NATO units in the center of the board and following up with successful second echelon attacks.  NATO air superiority in the subsequent turns managed to blunt the Warsaw Pact’s attacks as they reached further into Germany and began to push through a few lonely divisions into Belgium.

As the Soviet player, I kept to one or two tenets for my overall strategy.  The first and foremost was to keep moving and the second was to reinforce success.  While the Pact was stymied by strong NATO defenses in the north near Bremen and Hamburg and down south near Munich and Frankfurt, it did keep a lot of NATO units busy in these sectors while the other Pact units funnelled right through the middle.   As NATO reinforcements and POMCUS units came online, however, they were able to stem the flow of Pact reinforcements coming through the initial breakthroughs.  Both sides quickly found that they had committed all their frontline units and reserves into a slogging match that went nowhere fast.

Nuclear artillery was used by both sides but to little effect.  The Pact focused their nukes on hitting at stubborn NATO units sitting inside of cities and comfortably defending themselves against Category G units with low proficiencies.  In the meantime, NATO nuclear artillery was used to some degree of success for getting surrounded units out of isolation and back towards a more defensible line.  On turn 4, the escalation level allowed for nuclear attacks by air units, which NATO probably could have used to better effect than the Soviets given the situation on the board.  I suspect NATO might have been able to roll back some Soviet gains in the next couple of turns but not enough to make a huge difference.  The die had already been cast by mid-game and it seemed that neither side had the ability to push back against their opponents.

With most of the Ruhr occupied by Soviets at this point, I couldn’t imagine that either side would be happy with the way things turned out.  For the next game, I would need the Soviets to keep their second echelons well back during each first echelon attack phase instead of committing them all wholesale and hoping for the best.  NATO, on the other hand, would need to use their heavy divisions in a more intelligent way.  It doesn’t pay to use them in rough wooded terrain where their attack factors are halved.

Great game!  The best thing about it is the initial forward movements by NATO basically help to determine where the Pact is going to get its first breakthrough.  If the WP is going to have a successful time of it, the breakthrough needs to be followed up by some very careful planning in subsequent turns.