I don’t often get out my Star Wars minis but I always find that when I do, I usually end up having a much better time than I thought I would.  After slogging through The Third World War for the past couple of weeks, I needed a chaser  – something light, quick, and easy.  Star Wars Miniatures fit the bill nicely in this regard.  There aren’t a whole lot of rules to remember but it has some nice wargame-y aspects (line of sight, cover, squad cohesion and command elements, etc.) that make it a nice light tactical affair for afn evening play.

Deep in the back of the gaming closet, I rummaged around and found my old “Battle for Endor” expansion set with a huge AT-ST along with the map for the famous shield generator scene from “Return of the Jedi”.  Since my last game of Star Wars featured a small group of major characters (Darth Vader and Obi Wan) battling it out, I decided to change up and have a large group of minor characters (plus the AT-ST) in a bigger battle.  Here’s how things turned out.

The Rebels set up on the outer perimeter of the base, just inside the tree cover offered by the forest moon’s lush vegetation.  There are a couple of Scout Troopers near their speeder bikes nearby while an AT-ST sits just on the left Rebel flank.  The Rebels need to somehow get past this outer defense and penetrate into the Shield Generator building and set off a demolition charge beside the Shield Generator to allow for the Rebel fleet to destroy the new Death Star currently under construction high above the forest moon.

The first turn involved the Rebels fruitlessly attempting to shoot the Imperial Scout Troopers as they tried to make their way into the Imperial bunker but several shots missed and the Scouts found themselves firing back and killing off two Ewoks in quick succession.  The smell of burning fur and shrill annoying cries fills the forest air.

Another Scout Trooper fared worse in his attempts to flee and return fire on the other flank.  A commando led a Quarren Assassin, a Rebel Pilot, and C-3P0 and R2D2 to the outskirts of the trees and managed to wound but not kill off the trooper before he got much further.

Inside the bunker, three Stormtroopers (including an officer) are aware of the battle outside and are ordered to get to the bunker’s doorway and return fire at the encroaching Rebels.

The AT-ST starts firing away at the Rebels on their left flank and seriously messes up the enemy’s day.  A  Rhodian Mercenary and his ally are both killed by the Scout Walker’s twin blasters.  Things are not going well for the Rebels!

By this time, the Rebels hadn’t done very much against the Imperials and the Scout Troopers were nearly to the entrance of the bunker.  Two Stormtroopers at the bunker entrance managed to eliminate another one of the Rebels on the left flank.

The remaining Rebels on the right flank are faced with little choice but to make a break for it.  C3P0 and R2D2 make their way out of the forest.  Since they have the “Distracting” ability, they automatically draw fire from all enemies.  While the droids circle around the clearing uselessly, the rest of the Rebels runs from the forest cover and towards the bunker, taking their chances with the deadly AT-ST fire.

All hell breaks loose as the AT-ST, the Scout Troopers and the Stormtroopers open fire on the Rebels as they approach the bunker.  Although the remaining two Rebels on the left flank are killed (thus the entire flank is gone), they take out both Scout Troopers before being eliminated by the AT-ST’s twin lasers.  The Rebel Commando takes a well placed shot and kills a Stormtrooper.  The remaining Imperials gather inside the bunker and prepare to defend it to the last man against the meager attacking forces.  It’s anyone’s call as to who will win this one.

The blast doors on the bunker slam shut but C3P0 and R2D2 have the ability to open these things.  As AT-ST fire rips at the Rebels outside the bunker, the droids manage to open the doors and the Rebels charge inside.

While the Stormtroopers take a couple of shots at the Rebels as they enter, the AT-ST clunkily moves from the side of the base towards the front.  Before the droids can get inside, the Scout Walker unloads on them and reduces both robots to burnt metal fragments and wires.  Don’t worry – it’s nothing that a sequel can’t fix!

The blast doors slam shut behind the two remaining Rebels, rendering the AT-ST unable to fire at them.  Now it’s just a fight between the people inside.  The Imperials are made to pay for using their turn to eliminate the droids as the Quarren Assassin levels his rifle at the Stormtrooper Captain and kills him.  It’s just 2 on 2 now. 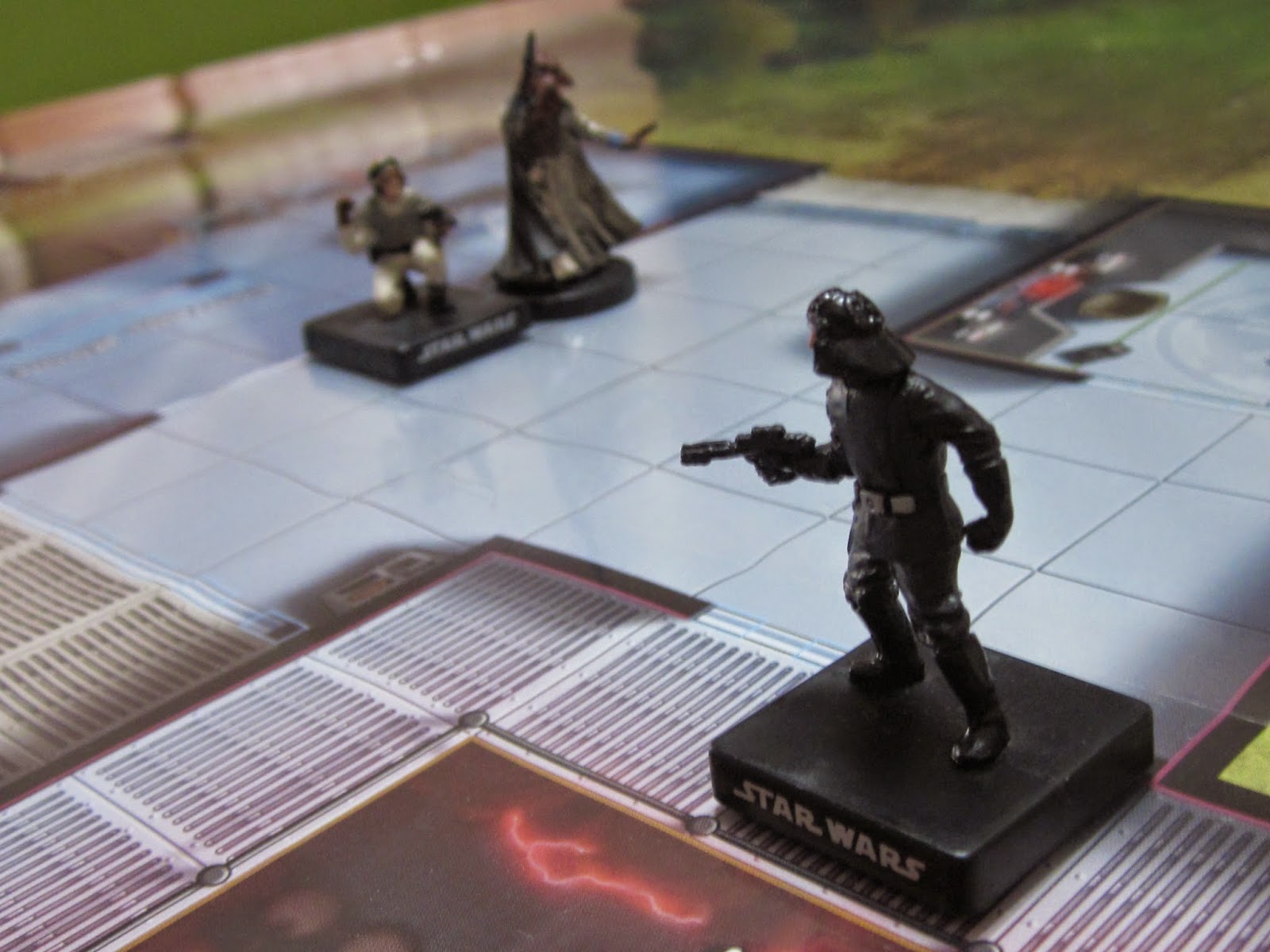 The Stormtrooper and an Imperial Navy Trooper blast away at the two Rebels, confident of their ultimate victory.   Unfortunately, both (!) of them roll a “1”‘s on a d20  roll to hit.  Both Rebels fire back and kill the Stormtrooper.  The Navy Trooper gets off one more shot before succumbing to blaster fire from the Quarren Assassin.  Both remaining rebels make their way to the Shield Generator room.  The Rebel Commando plants the demolitions and a narrow victory goes to the ragtag group of good guys.