Well, here we are coming to the end of turn 1 but there are two very important impulses to go through before things start to really wind down.  NATO gets two consecutive movement and combat impulses now, each with a regrouping phase at the end of it that lets you get rid of those nasty disruption markers that degrade unit proficiency. 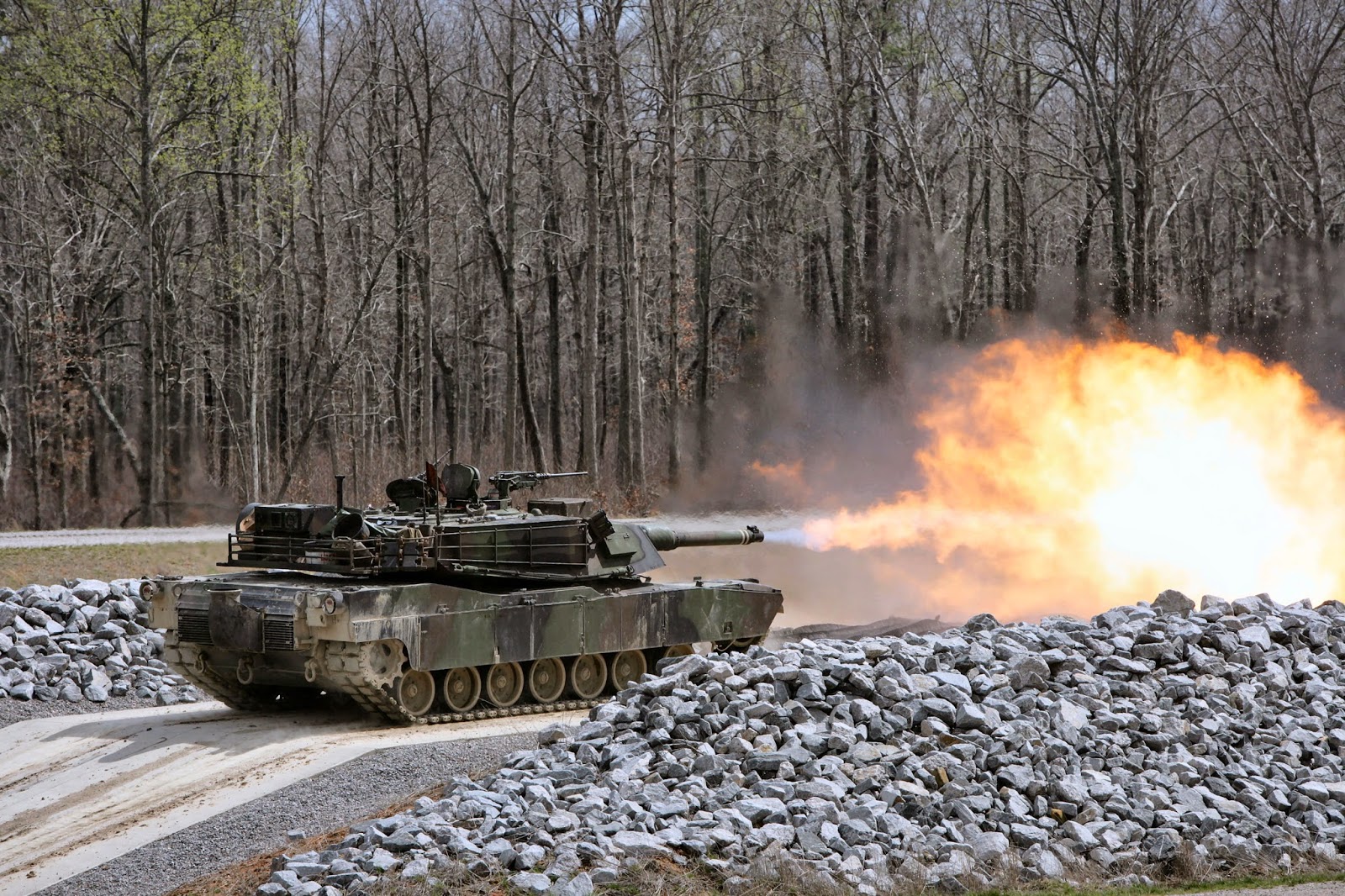 I pulled back quite a few units at the start of the impulse because I wanted to give them a chance to regroup.  The big advantage that NATO has over the Pact in this regard is that NATO units can fully recover their disruptions while the Warsaw Pact units cannot recover from the first level of disruption so once a Russian tank unit is hurt, for example, it stays hurt for the rest of the game.

To that end, I had several units in the south that the Pact had hurt quite badly, including a West German panzer division with five disruptions.  Up north near Hamburg, so many units were hurting that I basically pulled the line back to the nearest river and set up a defense there.  I could also see the real possibility of the Pact isolating and destroying the units very quickly in the coming turn with the way they were positioned. 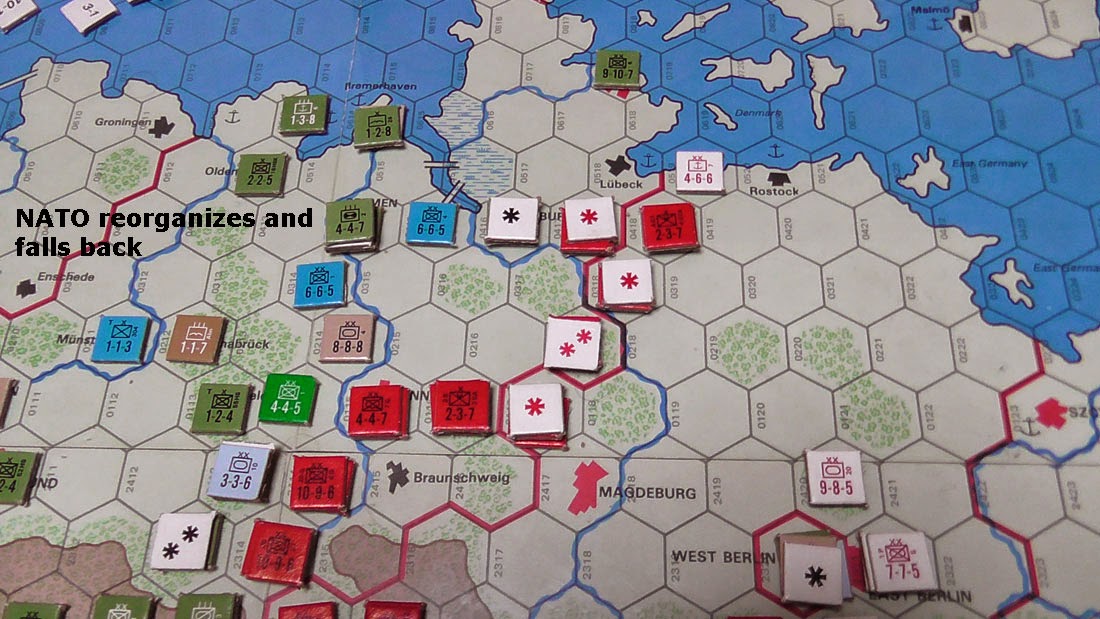 Poor movement decisions in the first impulse seriously limited my attack options against the Warsaw Pact.  An unfortunate 3 -1 attack near Hamburg resulted in two disrupted NATO units and not a single loss for the Soviets.  Other minor attacks resulted in little to no gains being made.  I shuffled around my units in the second NATO combat/movement impulse to get some better results and ended up pushing back two divisions of the 28th Guards Army back across the East German border – not an easy task but something had to turn my way after the setbacks and terrible choices of the past turn. 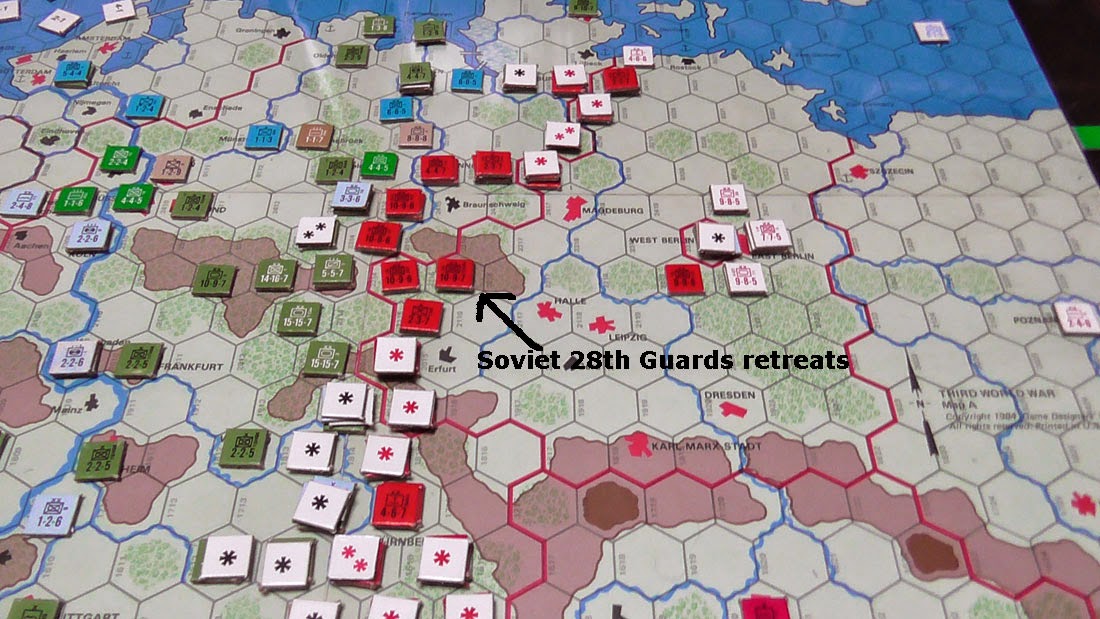 Perhaps the best thing about this turn was that NATO had yet another chance to regroup its units and suddenly the situation was looking a lot better.  Both sides failed their escalation rolls at the end of the turn to see if they could use nuclear weapons in the coming turns.  That’s too bad because NATO could definitely use some nuclear assistance to push back the Soviets off of West German soil.

Here’s a short video to explain a bit more about what’s happened and what’s about to happen.

All of the aircraft that weren’t shot down return to base and we’ll make maintenance rolls at the beginning of next turn to see if they manage to get back up in the air.  NATO gets quite a few air reinforcements so I wouldn’t be surprised if it manages to get air superiority.  On the other hand, it’s slated to lose 2 random air units thanks to the Soviet Blackjack runway cratering mission earlier in the game turn.

From this point, I’ll play a bit more and then set up the game again and go for another try now that I’ve learned the very basics of play and I’ve had the chance to make some mistakes.

My impressions so far of “The Third World War”:  It’s a very tense game that makes you think hard about how to use your units and there are always tradeoffs as NATO between getting guys up to the front and rotating them to the back to recover.  For the Warsaw Pact, you have to be extremely forwad looking in order to exploit your second echelon moves otherwise you’ll be stuck slogging it out at the border.

I’m pretty sure that I blew the Pact’s first turn by approaching the front line in a big column of guys and trying to hammer at the enemy rather than exploiting gaps and pushing divisions and armies through the holes to isolate NATO units and then push on.  As it stands now, I’ll reset and see what can be done with the benefit of lessons learned.  My bet is that this game would probably have NATO winning in a couple of turns due to air superiority and reinforcements coming on line.  The Pact’s major advantages seem to lie at the beginning of the game and it quickly loses steam every turn henceforth.