This is just a series of short posts dealing with my attempts to play through a turn of “The Third World War” in order to learn the basics of the game.  If you haven’t tried it before, hopefully this will give you some insight into how it plays – providing I don’t make too many major rules errors! 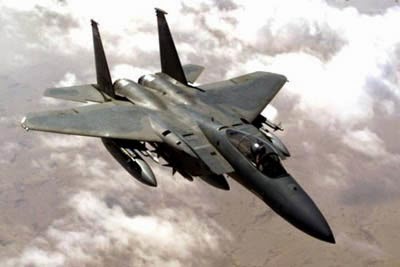 The Air Superiority Phase starts and the Soviets throw anything up in the air that might be able to fly – regardless of whether it’s obsolete junk or the newest high-tech fighters.  They have more air units available this turn (NATO starts getting serious with air reinforcements in the coming turns) so this is the Warsaw Pact’s big chance for AS (and probably the only time they’ll get it all game, from what I’ve been reading).

The Deep Strike Phase happens and NATO is unable to launch any strikes on turn 1 so the Pact goes ahead and tries for a runway cratering mission and also a logistical strike.  The cratering mission is flown by long range Tu-160 Blackjack bombers and escorted by Su-27s and Mig-29s.  Meanwhile, the logistical strike mission will be flown by Polish Su-20 attack aircraft and also escorted by Su-27s and Mig-29s.

NATO scrambles USAF F-15s to attempt to intercept the incoming strike missions.  First off, we resolve interception against the cratering mission and the F-15s manage to shoot down the Su-27 escorts before being shot down by the Mig-29s.  The same exact thing happens with the F-15s intercepting the logistical strike mission.  Despite the nasty losses of the F-15s for NATO, the loss of the Su-27s is far more devastating for the Warsaw Pact, which has fewer high capability combat aircraft to lose.  NATO still has F-15s left in its arsenal and will have more coming online in future turns.

The runway cratering mission gets to its destination and has some remarkable luck, catching two NATO air units on the runway and destroying them (these aircraft will be randomly selected and removed in an upcoming impulse).  The logistical strike is also quite successful, putting 5 NATO brigades out of supply.  This will come into effect on the turn 2 Supply Phase*.  So far, things have been going quite well for the Soviets and their allies but the real test is yet to come.

*Oops, no. That should have come into effect immediately.  I tried to balance this out in the subsequent turn.

Next up:  The Ground War begins!