Well, it seems that the post office is considerably faster than I expected and some superhero managed to send through my copy of Anzac Attack in record time. I pre-ordered this one a while back and I’ve been looking forward to playing it for a long time.  Let’s take a look at what we’ve got in the box:

The cover art looks great and I knew the photo was the right choice because my wife immediately said it was scary.  We’ve got the standard Lock ‘n Load cover art here with the photograph up top and the counters at the bottom.  The box is pretty sturdy and it’s just the right size to fit all the components inside.  Well done.

The two maps included in the box look nice.  They are a bit less reflective than the Forgotten Heroes II maps, which I personally like because that means less lens flare when I take photos of my games.

Map 8 has tons of heavy jungle on it along with a hill beside a road.  Looks like a beautiful map for a deadly ambush scenario.

Map 9 offers some nice terrain in it.  Note the slight change in kunai grass from the original FHII.  It still looks good though.

Next is the scenario book, which looks beautiful.  It’s all in full color and the photos used for each scenario are relevant to theme and interesting to look at.  There are 13 scenarios here of varying size and scope, from one-map slugfests to four-map all-out battles.  Australians are featured in the bulk of the scenarios but there are several other forces here too – fear not, the beloved USMC makes another appearance in two scenarios!  Peter Bogdasarian, James Luck, and Mark H. Walker designed the scenarios and they look pretty good.  I’ve enjoyed Peter Bogdasarian’s work in the past with the Corps Command series and I really liked his Ambush (Relief Attempt during Operation Attleboro) scenario so I’m looking forward to trying all these.  It’s a bit sad to see that they got rid of the designer’s notes for the scenarios but their absence doesn’t take much away from the game. 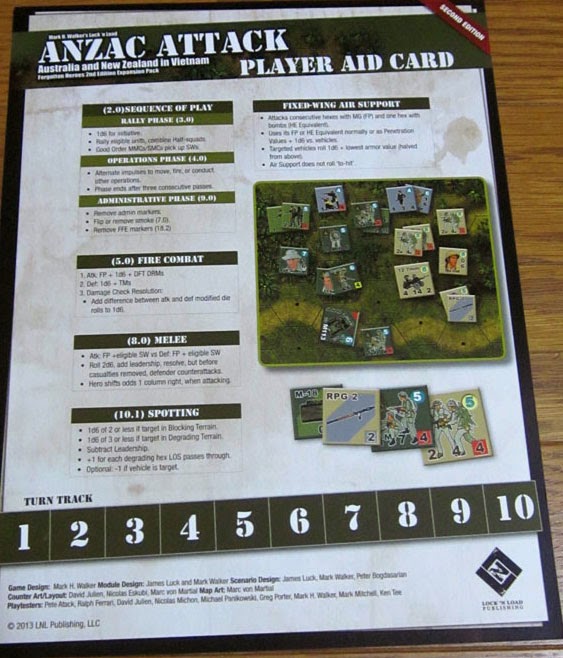 The double-sided player aid card looks great here and it’s in full color.  It’s especially nice to see that a turn track was provided since these are not printed with each scenario in the book (nor should they be).  It’s kind of amazing to compare this with the player aid card provided with earlier LnLP products like “Day of Heroes”.  Look at how far we’ve come! 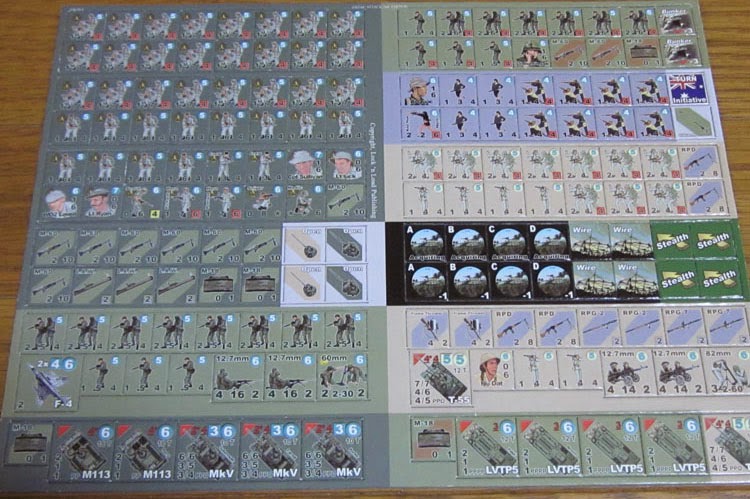 Finally, we’ve got a single sheet of counters (170 of them to be exact). The gang’s all here with VC, NVA, US, New Zealand, and Australians represented.  David Julien, Nicolas Eskubi and Pete Abrams were involved with various aspects of the artwork and it all looks terrific* (a huge sorry to any misunderstandings caused before the edit and sorry if I missed any other artists who worked on the game). 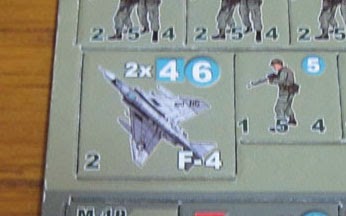 I was really happy to see aircraft counters in this expansion.  I really liked how airstrikes were incorporated into Heroes of the Gap and it’s nice to see them back again here.  I can’t wait to get this bad boy on the table.  Acquisition markers are also provided – something that was missing from the reprint of FHII.  Thank you for putting them in the expansion!

There are also several new vehicles in the expansion.  The T-55 kicks up the NVA arsenal a notch and gives the enemy forces something to think about.  There are also Mk V tanks and much more. One notable change to the counters includes the presence of women on VC counters.  We had Arnat in FHII, which was a nice change of pace and a nod to the reality of female combatants in Vietnam.  It’s nice to see a woman represented on a hero counter and on a squad counter. 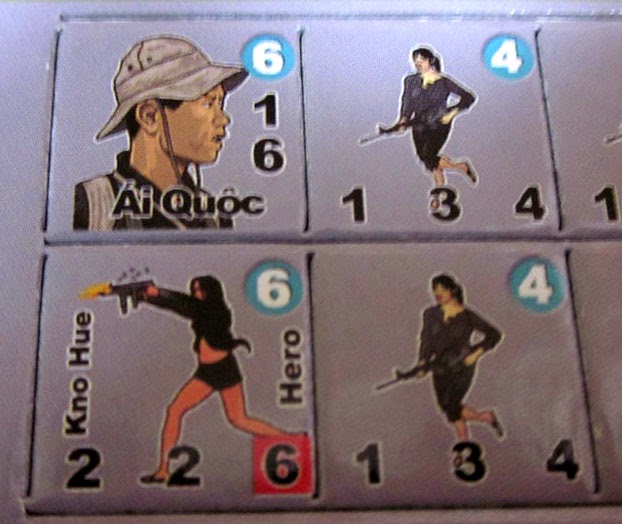