Line of Fire magazine issue 12 has several excellent scenarios that expand on Lock ‘n Load Publishing’s Forgotten Heroes II, its game of modern squad tactics set in the Vietnam War.  One of the first scenarios in the magazine is called “Ambush!  Relief Attempt During Operation Attleboro”, which was created by Peter Bogdasarian, who designed such games as Tank on Tank and the Corps Command series (which includes “Dawn’s Early Light” and “Totensonntag”) among others.

Before we get into the AAR, I’ll talk a little about the scenario’s historical background.  During Operation Attleboro in October and November of 1966, the Americans conducted Search and Destroy airmobile missions against the Viet Cong near Tay Ninh, located just south of the Cambodian border in War Zone “C”.  Conducted in two phases, Phase I went relatively well for the Americans from the start of September but in early November, four US Army battalions became part of an ill-fated plan intended to capture a concealed enemy depot. 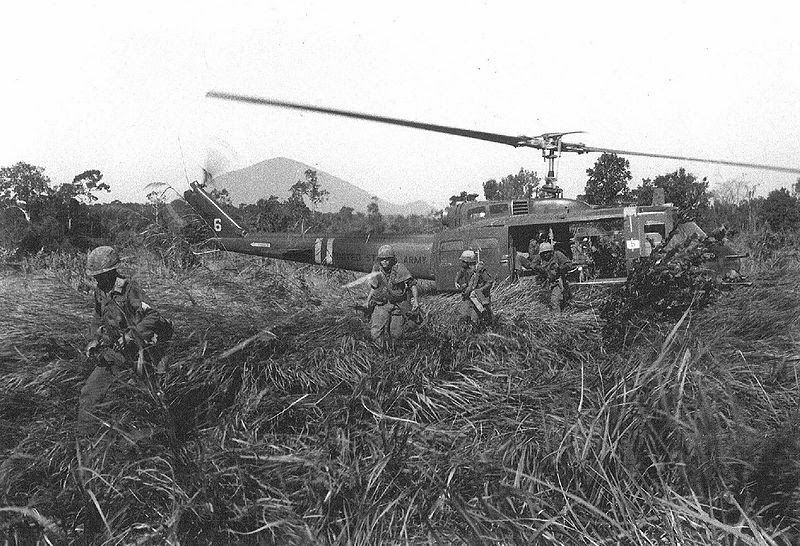 The US battalions advanced towards a nearby river where the depot was thought to be located.  However, they soon found along the way that the thick vegetation in the area quickly led to a loss of unit cohesion.  One of the attacking companies from the 27th Infantry Regiment ran into a heavily fortified VC reconnaissance camp from the 9th VC Division.  Confusion reigned among the Americans in the heavy jungles along the Suoi Ba Hoa River as command and control quickly broke down and no one seemed to really know where the other attacking American units were quite located.  Sensing the problems that the Americans were having, the 9th VC Division commander, Col. Hoang Cam, funneled his men (and those of the 101st NVA Regiment) into the area.  Over the course of several days, the battle grew ever more larger and the fighting became desperate as each side committed more and more troops.

One of the reinforcements companies that was landed in the area to the north of the area ran into an ambush on its way to helping out the 1st battalion, taking sniper fire from the trees and machine-gun fire through fire tunnels cut through the tall grass that concealed the gunner’s positions.  The company needed to be rescued by two American companies the next day and was found badly mauled with six dead and 19 wounded.  There’s an excellent article here with more details about the operation. This particular scenario focuses on the plight of the American reinforcement company sent in to help out 1st Battalion, 27th Infantry Regiment on November 4th, 1966.

We’re using map 4 from Forgotten Heroes here but hex columns I to the right side of the board are out of play.  The US also can’t use low crawl or spotting until the fighting starts to simulate the fact that the Americans are walking into an ambush.  The VC have cut fire tunnels into the kunai grass near the bunker to the southwest so the kunai doesn’t actually block any fire coming from the bunker (though it does degrade it).

The US gets two leaders and one hero along with nine 2-6-4 squads.  The VC have six squads, a 12.7mm machinegun team and only one leader, “Lt. Diem”, who gets an “Eagle Eye” skill card.

There are also a few events here but I have marked them with spoiler code and avoided mentioning them explicitly anywhere so it’s safe to read if you haven’t played it yet!

Victory is measured by how many units each side can eliminate or reduce.  Basically, the VC side gets 2 points for eliminating a US squad and the US only gets 1 point for taking out a VC squad.  The side that holds the B7 and H7 hexes at the end of the scenario also gets additional victory points.

This is a quick scenario – only four turns, so everyone needs to move fast and hit hard!

The VC break their ambushing forces into two.  In the southwest, they place three 1-4-4 squads along with the leader and plunk the 12.7mm WT into the bunker in the kunai grass.

The VC player places three 1-4-4 squads in the southeast corner, one of which gets an RPD and is placed in the other bunker.

The Americans have initiative and start hustling through the jungle with both of their leaders with three squads each double-timing to the edge of the treeline.

The other three squads are trailing along, looking at the pretty flowers and admiring the scenery.  The US has a hero (with a “Thumper” card) who goes it alone along the right side and arrives at the edge of the bush.  An event occurs

Event Spoiler:
and a US medic shows up

The VC open up from their concealed positions.  Walker and his squads get hit very hard, with all but one 2-6-4 unit shaken in the first volley of fire.  Another VC squad on the right shoot at them again and reduce two of his squads to casualties while wounding Lt. Walker.  The blood starts to flow and the Americans realize they are in big trouble. The only consolation is that the US player gets a hero (“Loner”) in Walker’s hex in F3.

Lt. Jenson and his platoon suffer a shaken squad from being hit by 12.7mm machinegun fire on the left.  The US player has certainly taken his lumps this turn.  A VC 1-4-3 squad is sent up towards D6, hoping to get into a lucky melee situation next turn if the Americans fail their rally rolls.

Walker manages to rally a couple of reduced squads back to life while Jenson calms down his shaken squad and gets everyone in his hex back into fighting shape.

Thumper goes to work, firing at one of the VC bunkers but it doesn’t do anything.  “Loner” runs out and acts as a bullet magnet.  He makes it out of the treeline before being eliminated by heavy VC fire.  Walker and one of his squads fire back but nothing happens.  With the VC on the right flank occupied, one US squad runs out towards the VC ambush position.  An event is triggered and:

Event Spolier:
a VC squad with an RPD shows up behind the American lines, which moves in and eliminates Walker and his squads in melee!

Jenson shakes up a VC squad in D6, inviting return fire from Lt. Diem and the 12.7 mm machinegun team in the lower left of the board.  One VC squad is sent up into the jungle hexes near enough to melee the Americans (at their special triple melee strength if coming from a hex out of American LOS) if they fail to protect their flank.

So far, things are going poorly for the US.  They have lost a significant portion of their attacking force and failed to eliminate a single one of the ambush positions held by the VC.  I’m getting a bad feeling about the possibility of a close outcome for this scenario but I continue anyways because you just never know with this game system.

The US player decides that it’s time to get out of the jungle and on towards the VC.  Sitting here is just not working at all.  It’s impractical to try and take out both ambush positions with such few men, so they focus on taking out the VC on the lower right of the board.

“Thumper”, the US hero, is sent down towards the VC position in H6 and gets hit.  With more guts than brains, the 2-6-4 squad in G4 decides to go for it and gets next to the VC 1-4-3 squad in G6 and makes it through the opportunity fire without a scratch.  The Americans jump into the VC foxholes and eliminate the enemy in melee fighting.

Jenson sends a nearby squad to melee the VC in the nearby jungle hex before it tries to sneak up on the Americans. Another short melee ends in a US victory.  The Americans seem to be finally pulling together here.  They push their luck a bit by sending another squad south to take out the shaken VC squad in D6.  Lt. Diem and his squad fire at the advancing squad but miss horribly.

The turn ends with Jenson moving down towards the lower right of the board with his remaining squad.  As they advance to the southeast, however, they are shaken by 12.7mm machinegun fire coming from all the way over in the B7 hex bunker.

Final turn and the US gets initiative here.  Lt. Jenson fails to rally so the US is going to need to work hard.

The US squad in G6 hops on top of the bunker in H7 and then goes inside, winning a melee and capturing the hex.  The VC in H6 fires at the US hero in H5 and eliminates him.  Over on the left side of the board, two US squads make a play for the VC leader and squad in C6 but are shaken up on the approach by the B7 bunker’s weapons team and Diem’s RPD squad.

This was a really interesting scenario!  The events were really surprising and definitely changed the outcome of the battle.  By the end of turn 2, the Americans had taken so many losses that they were forced to choose between one of two objectives.  Unfortunately, it wasn’t enough to make up for all the American casualties that the VC were able to inflict early on in the game.  The VC won this scenario coming out at around 10 to 7, a slim margin of victory.  If I had to play it again, I would shove at least one of the American platoons out of the jungle at the top of the board and get them heading towards the VC ambush positions on turn 2.  Hanging around at the top of the board for too long proved almost fatal for the US squads.