7th Fleet was the third release in the Fleet series from Victory Games released way back in 1987.  This time focusing on action in the Far East, the three huge three map offering was one of the most ambitious Fleet release yet as it included not only Soviet and US units, but ships from a number of other nations, such as Japan, China, North and South Korea, the Philippines, and Vietnam (even Canada makes a token appearance with a single ship in there).

By the third time around, Victory Games had had a chance to carefully expand and refine the rules to include just the right amount of chrome and basic game changes that it could be picked up quickly and easily by Fleet players old and new.  The game’s 12 scenarios are carefully crafted and balanced enough to please anyone and keep players entertained for a long time as they battle it out for control of the Pacific.

In the game’s first scenario, civil war in the Philippines has broken out after a fascist government has come to power following the fall of the Aquino administration.  While a large collection of rebel groups with varying agendas vie for power with each other and the new dictatorship, the Soviets see their chance to gain a dominant position in the Pacific by covertly delivering weapons to pro-communist rebel factions.  They quickly dispatch a task group of cruisers and frigates to deliver their supplies to the port of Paluan.  Of course, the Americans are not at all happy about this turn of events and plan to stop the Russians..

Complicating matters, the Vietnamese have already had two of their cargo vessels stopped and boarded by the Americans as they steamed into the waters around the Philippines.  The US Navy discovered the Vietnamese ships were loaded with weapons undoubtedly on their way to help out their communist rebel buddies.  Enraged by US interference with their shipping, Vietnam retaliates by shooting down two P-3 Orions patrolling in international air space off Vietnam’s eastern coast.  The Orion pilots parachute out of their planes and are now stranded on a tiny island called North Cay, situated near the Dangerous Ground Reef.  The airmen are now waiting to be picked up by friendly US ships.  Unfortunately for them, the Soviets also have plans to pick up the stranded airmen. 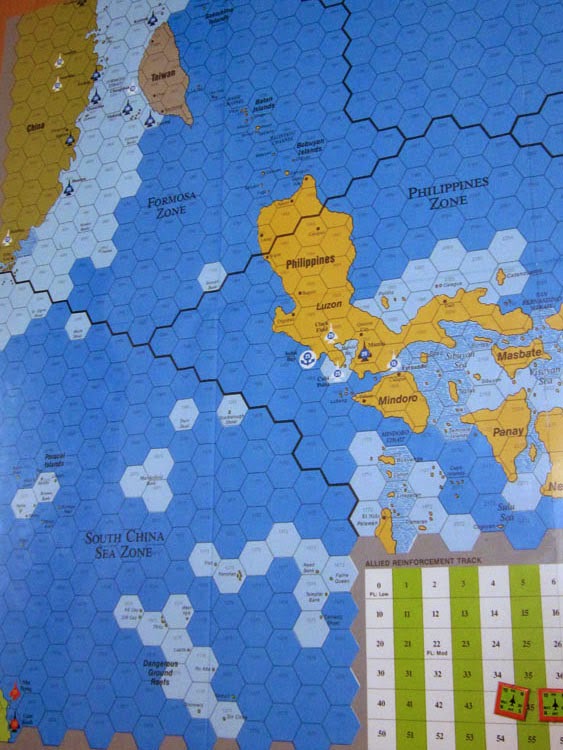 So here’s what our playing area looks like, with everything from the north of the Philippines right south to the coast of Vietnam in play.  It’s a big area.  The action around the Philippines will mainly focus on the US trying to prevent the Soviets from getting supplies to Paluan, on the western tip of Mindoro.  Further south, near the bottom of the map, the US and Soviets will be sending ships to pick up the stranded US airmen east of Vietnam.

The Soviets have some hefty air support available at their bases in Vietnam.  The Vietnamese have two squadrons of MiG-21s at Nha Trang air base while the Soviets have bombers, electronic warfare, interceptors and recon aircraft on the tarmac at Tuy Hoa airbase.  In Cam Ranh Bay, the Soviets also have a frigate and a flotilla of corvettes.
West of the Philippines, the Soviets have several cruisers and a destroyer escorting two container ships filled to the brim with weaponry and they must deliver them to Paluan by the end of turn 4.  There is some pretty heavy firepower here with one Kresta II class cruiser (the Marshal Voroshilov) and two Kresta I class cruisers (the Vladivostok and the Admiral Drozd).  The Kresta I ships were designed for an anti-ship role while the Kresta II class ships were designed with anti-submarine warfare in mind.
Some interesting historical tidbits:  The Admiral Drozd participated in the rescue of K-19, the Soviet submarine that experienced a critical reactor leak in July 1961 (and was featured in a movie with Harrison Ford several years back).  The Drozd was decommissioned in the early 90s and sent to India for scrap but sank in the Indian Ocean while being towed.  The Vladivostok had quite an impressive career, testing American defenses out on the west coast of the United States and tracking the USS Kittyhawk for Soviet submarine K-314 to follow (and inadvertantly collide with – oops).
The Americans have two groups of ships to start out with here.  One group (Task Group 2) consists of three ships, the Sterett (a Belknap class cruiser), and two frigates (the John L. Hall and the Gallery, both of which are O.H. Perry class).  The Sterett was commissioned in the early 1960s and had a distinguished and long career in the Pacific.  During the Vietnam War, it operated dangerously close to the coast and directed US fighters to intercept enemy MiGs.
To the south, the US has an impressive array of ships, not the least of which includes the battleship USS Missouri (“Big Mo”).  It’s accompanied by three destroyers (Oldendorf, Preble, and Thorn) and a cruiser (Harry E. Yarnell).  The  Missouri gets 2 cruise missile attacks in this scenario, which can be used against base hexes.  I’ve decided to split up this group of ships into two separate task groups.  The Thorn and Preble (task group 4) will head southwest to try and pick up the US aviators while the Missouri and Oldendorf (task group 3) will link up with the Sterett and Gallery (task group 2) near Subic Bay.
Turn 1:
Strategic Air Phase:  The Americans send out a P-3 Orion to detect the Soviet task group west of the Philippines, hoping to intercept it on its approach to Paluan.  An F-4G Phantom II from Clark Field offers tactical coordination in the Philippines zone.   Meanwhile the Soviets send their T-16s to find the ships in US Task Groups 3 and 4.

Action Phase:  The US gets the first action here, sending Thorn and Preble in Task Group 4 down towards North Cay Island to try and pick up the US aviators while Task Group 3 (Missouri and Oldendorf) heads north to link up with the other US ships in Task Group 2 closer to the Philippines. The Missouri takes this opportunity to fire off a cruise missile at Tuy Hoa airbase but it fails to inflict any major damage (US player rolls a “2” for damage).

The Soviets push through their task group towards the Philippines port of Paluan virtually unopposed as the US ships are too busy reorganizing into a task force south of Subic Bay.  Down south, the Soviets have sent their frigate and corvette northeast from Cam Ranh Bay in a bid to capture the US airmen on North Cay before they can be rescued by Thorn and Preble.

The Soviets get one air phase here and since the US cruise missiles failed to damage the airfield at Tuy Hoa, a flight of MiGs and an EW plane can be sent off to bomb Task Force 4 off the coast of North Cay.  Despite heavy AAA and SAMs, the MiGs get through and bomb the Thorn, crippling it.

The Americans start off this turn with the initiative and activate their surface units.  Task Force 4 attempts to rescue the downed US aviators on North Cay but fails to locate them.

Task Group 2 and 3 are combined into a single task force south of Subic Bay.  The USS Missouri fires off another salvo of cruise missiles at Tuy Hoa but the airfield is still operable (a “4” on the damage roll fails to score enough damage hits).

With the US Task Force ready to go, it steams west to intercept the Soviet cargo ships and cruisers heading for Paluan, firing off a mighty salvo of anti-ship missiles at the Soviet ships from 2 hexes away.  The Soviet defenses manage to mitigate most of the damage, however, and the attack ends with only one of their cargo ships damaged.

The Soviet task group moves adjacent to the US task force, hoping to speed right past it and continue to Paluan.  In a bid to hurt the Americans, they send all of their anti-ship missiles off against the USS Missouri but the Task Force shrugs off the attack with high value air defenses.

Down south, Task Group 4 has to fight off yet another air attack from Soviet MiGs and EW aircraft.  This time, the Preble and Thorn are ready for the fighters and manage to put up enough of a screen to damage the T-16 electronic warfare aircraft.  However, the MiGs still get through and this time they damage the Preble.

The Americans need to score some hits here to stop the Soviets from getting away with the game.  Things don’t start off well as the Soviet Task Group 7 just off North Cay manages to capture the US airmen on the island and gain 3 Victory Points right off the bat.  Thorn and Preble, now damaged, limp away northeast from the island, hoping to get out of range of the MiGs at Tuy Hoa airbase.

Meanwhile, the Soviets task group west of the Philippines again attempts to launch a devastating attack to cripple the USS Missouri.  The Soviet SSMs are duly shot down as they come into range of the US task force.  However, the Soviet cargo ships are now frighteningly close to Paluan and will land next turn if unopposed.

The US task force moves adjacent to the Soviets again after tracking them eastward and goes for broke, attempting to damage a Soviet cruiser and an undamaged cargo ship.  Although the Soviet air defense roll isn’t great, the American player rolls a “0” both times for his attacks.  Unscathed, the Soviet task group resumes its trip eastwards.

Strategic Air Phase rolls around again and both players are forced to put whatever meager air resources left on reconnaissance and tactical coordination.  The US player desperately needs an activation first in order to get one last hit in on the Soviet ships as they approach their destination.

Unfortunately, the Americans lose the initiative here and the cargo ships land in Paluan to unload their deadly cargo.  The Soviets earn a total of 12 victory points here getting a “Substantial Soviet Victory”.  It’s just a hair under the requirements for a major victory but the damaged cargo ship brought the numbers down in the end.

This was a very tough game with lots of agonizing decisions, especially for the Americans.  Is it better to keep your ships together and focus on one objective or should they be split into smaller task groups to attack the Soviets from more angles?  There was a lot of luck (good and bad) in this scenario, especially in relation to the capture/rescue of the American airmen on North Cay.  On the other hand, it could be argued that the US should have held off from using its F-4 Phantoms on CAP over Clark Field and instead used them to bomb the Soviet ships on the way to Paluan (although this would have opened up Clark Field to bombing runs by the Soviet T-16s based in Tuy Hoa).  So much went wrong here – the cruise missiles never damaged the Vietnamese airfields and the atrocious attack rolls on turn 3 – it’s hard to imagine how the American could have won even if they had used different tactics.