One of the things I love about older games is that much of the cover art has been hand drawn and/or painted by some very talented people.  The best cover art can spark the player’s imagination and pull them into the game – or at least get it from the retail shelf to the cash register.  It’s amazing to see the level of detail and love that went into some of these games.  For that reason, I just want to write an article in appreciation of this by pointing out my top 5 favorite old school box covers.  The criteria is that the game has to have been released prior to 1990 and I must actually own the game.

Here we go, ranked in order: 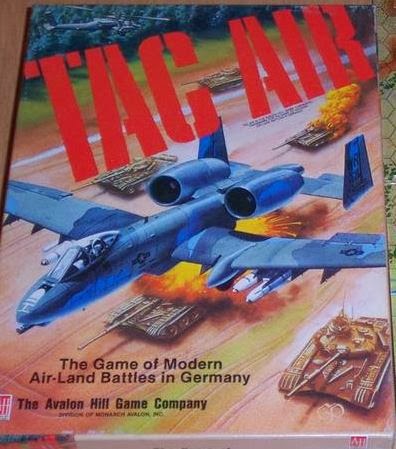 What’s not to like here?  The A-10 sweeping across the cover like a bat out of hell hitting those Soviet tanks on a forest road tells you exactly what to expect in this game.  The fast action-packed air rounds are a central part of Tac Air and this emphasis on the air aspect of the game is reflected accurately by the cover art.  I love the game because of the art and I love the art because of the game.

The late great George I. Parrish Jr. did the box art for Tac Air and he did his usual wonderful job of bringing the game to life.  Throughout his life, Parrish was a prolific artist and was involved with some great board games such as Blackbeard and countless ASL magazines and modules.  Parrish didn’t do only board games.  He covered a lot of different subjects using many different styles.  Interestingly enough, Parrish studied with Norman Rockwell.  Check out two of his beautiful oil paintings currently hosted at Rochester Institute of Technology. 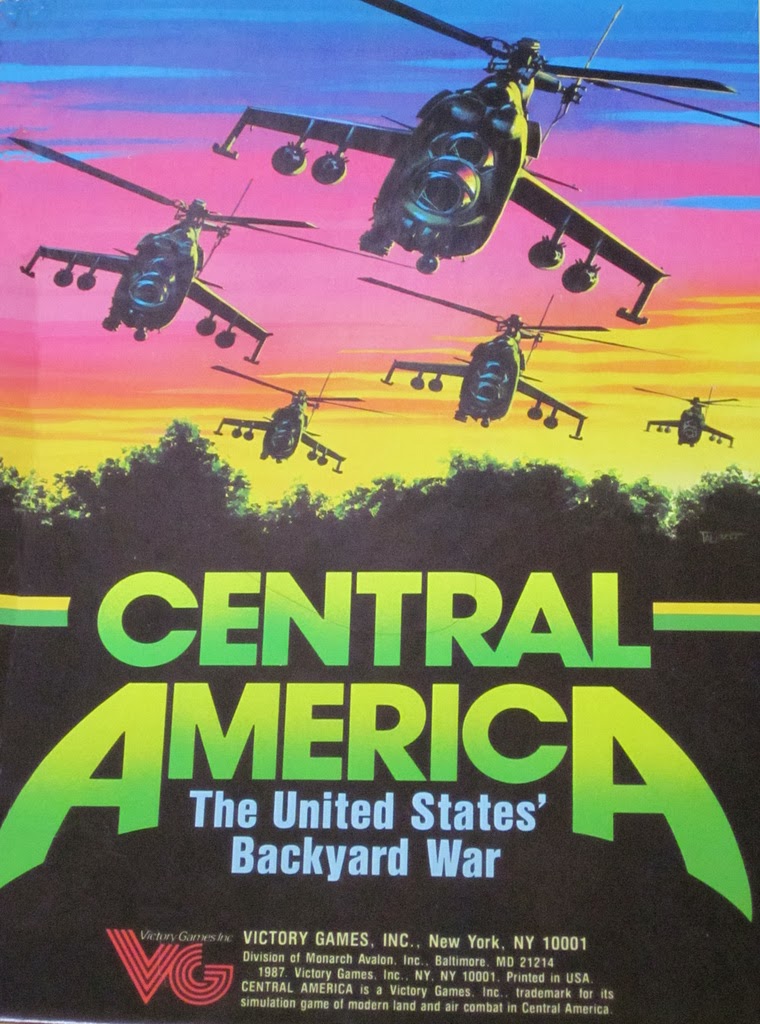 The group of Mi-24 Hinds looming menacingly over the jungle treetops at dawn is hard to resist.  There’s a nice contrast here between these deadly machines and the serene sky and trees in the background.  Besides that, is there any machine more terrifying in the whole Soviet arsenal than a fully armed attack helicopter?  The artwork alone has convinced me to get the game out on the table more than once despite the hefty rules set. There’s something about the image that encapsulates Reagan-era secret wars against Soviet-supplied enemies.

The artist here is James Talbot, whose skilled hands crafted the artwork for some of the great games of the 1980s such as Hitler’s War and Mosby’s Raiders.  He worked alot with Victory Games on many projects, doing the box art for several of the Fleet series games, Ambush!, and he also created some fantastic drawings for VG’s James Bond 007 roleplaying game, for which he not only did the cover art but also the countless drawings that fill out the pages of each module and sourcebook. 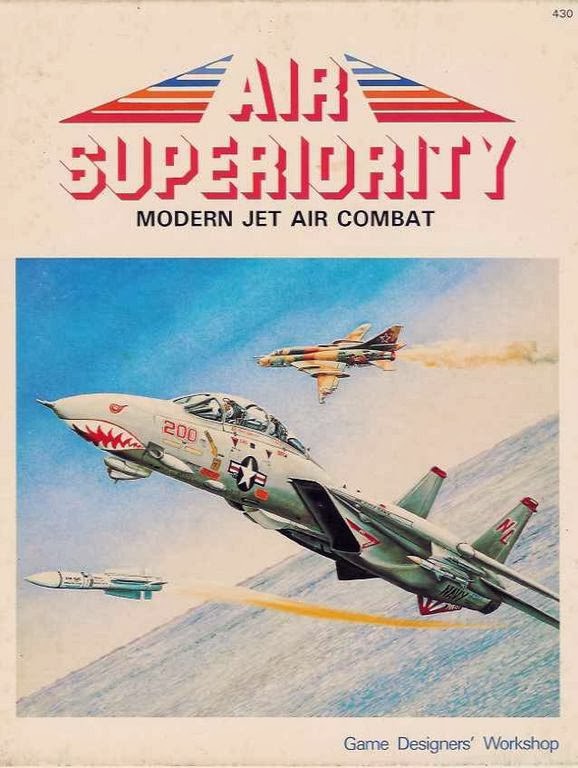 Ever since I watched Top Gun as a kid, I’ve always loved F-14 Tomcats.  The cover here is beautiful with wonderful attention to detail.  It looks like the Tomcat has fired its cannon thoroughly and effectively at the Soviet Su-17 with an engine fire behind it.  As the Soviet plane struggles to stay flying, the victorious Tomcat is ascending in the foreground and already firing off a Phoenix air-to-air missile.  At first I thought this was a depiction of the Gulf of Sidra shootdown in 1981 but the Tomcat number is all wrong and the star on the tail of the Su-17 does not match a Libyan military aircraft.  In any case, the cover is a great-looking invite into an uncompromising game that attempts to simulate modern military jet dogfights.

This painting is by Steve Venters, who did a lot of work on modern and futuristic games.  He did some of the beautiful covers for Harpoon, artwork for the roleplaying game Twilight: 2000 and he also did the art for several Battletech books and Renegade Legion.  There’s always some kind of cool action going on in Venter’s pieces. This cover is great on every level.  Here we get a view from behind two missiles as they scream towards the USS Nimitz (why are there no planes on that carrier?  Where did they go?).  The American aircraft carrier group, meanwhile, is launching its own missiles against the incoming attack.  This is the game right here – gambling everything on getting close to an enemy and throwing your SSMs at them in hopes of getting a hit.  For all the times that the Nimitz has been targeted (and missed) in my own games of Sixth Fleet, I feel it’s appropriate to have it here.

This is another work by James Talbot, who did a ton of covers for Victory Games throughout the 1980s.  After Sixth Fleet, Talbot would go on to do the artwork for both 2nd Fleet and 7th Fleet, both of which are games that I own and love.

1. Avalon Hill’s Freedom in the Galaxy 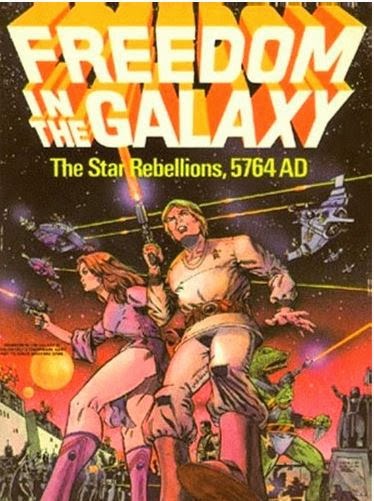 Maybe people will disagree with me but there’s so much I love about Freedom in the Galaxy’s cover art.  You can see the attempt here to basically throw in everything but the kitchen sink in order to create an “epic” feel that shows off the flavor of the game.  Sure, you might say there’s an uncanny resemblance to a certain science fiction movie in here but I think that’s the whole point of this game.  The drawing style here reminds me of Marvel Comics’ late ’70s era work and fleshes the game out very nicely.  It’s colorful, action-packed, and has a real joy to it.

The late Redmond A. Simonsen did the graphic design for this game and for those who don’t know, he was kind of a legend.  Not only did he take charge of artwork for more than 400 games while at SPI but he also was involved with the actual design of over twenty games.  As art director, he pushed hard for the serious consideration and inclusion of artwork into games.  As a quote of his reveals:  “The more graphic engineering the artist can build into the game equipment and rules, the easier and more enjoyable becomes the play of the game”  I couldn’t agree more.  During his stint, he pushed for better graphics, mounted color maps, and better quality playing pieces, setting the standard for boardgames at a crucial time in their development.