Last month, I posted a short review of Fire Team, a tactical squad based game set in World War III.  I’ve had a bit of time to sit down and play this West End Games offering from 1987 and I’m enjoying it for the most part.  There are some holes in the rulebook and one or two things that don’t seem to make sense, but overall I’m happy I bought it.

Today, I whipped out scenario 2 from Fire Team, “Reconnaissance on the Nuremberg Highway” and played through it.  The situation is that the US 2nd Armored Cav has sent out a small task force to find the Soviets advance down the Nuremberg road.

To win this scenario, the Soviets have to get two vehicles from the same platoon off the north side of the map in five turns.  The Americans gain victory by preventing the Soviets from doing this and by inflicting losses.

This scenario is really interesting because the Soviet player can choose from one of three types of force compositions:  1)  Two platoons of BMP-2s and a handful of troops.  2.)  A helicopter forward detachment with attack and transport choppers or 3.)  several T-80s and a few more BMPs.  Depending on the type of force that the Soviet chooses, the NATO player may or may not get reinforcements.

I also enjoyed the “mystery map” aspect of this scenario. Basically, all forces start out on map C.  If the Soviet player moves his forces off the map to either the east or west, he rolls a die, checks a chart and selects the adjacent map based on the result.

So here’s the Americans, who start off with six M2 Bradleys with TOW missile systems.

The Soviets get two platoons (3 vehicles each) of BMP-2s.  Each platoon has a reduced weapons team with RPG-16 rocket launchers.

For this scenario, I decided to keep things small since I’m still learning the game system.  I’ve gone with the basic forces for both sides.

The map below shows the way the setup went.  Basically, the M2 Bradleys are strung along the road to the north while the Soviets are in two “clumps” down at the bottom of the map.

The Soviet 1st vehicle platoon plans to hook east and try to get around the Bradleys to escape to the north while the 2nd platoon will drive straight north and try to engage the enemy. 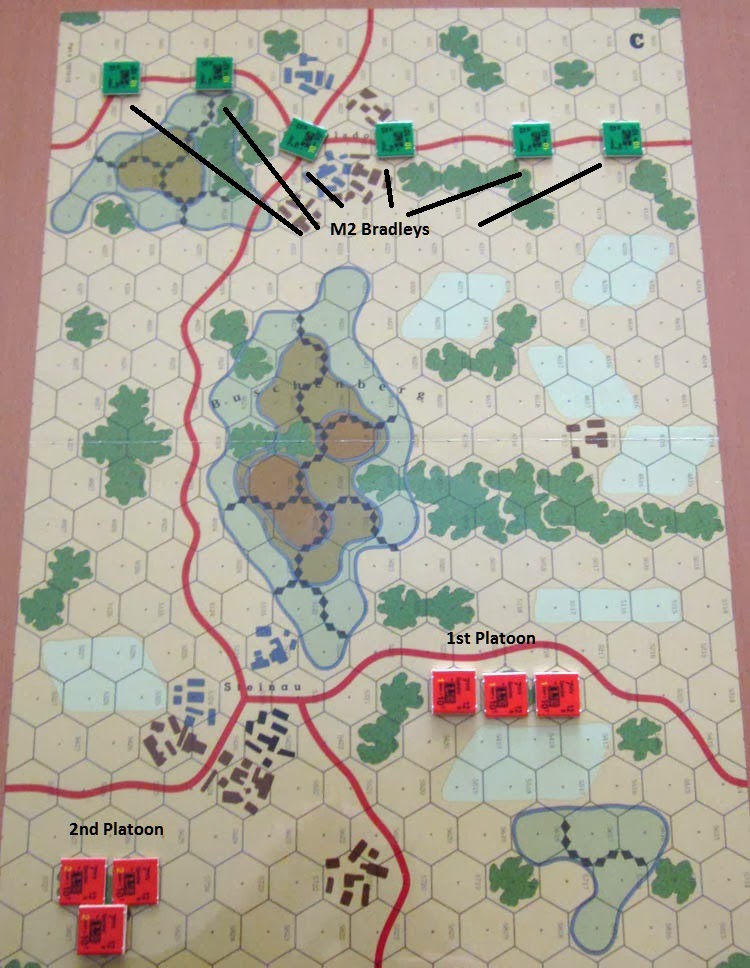 Here’s a closer look at the Soviet setup.

The Soviets get first activation and the BMPs of 1st platoon trundle towards the east side of the map.  The first vehicle arrives at the edge of map C so the Soviet player rolls for and places the adjacent map, which is map A.  Below we have the new board setup with Map C to the left and Map A to the right.

The Soviet BMP-2s take a bit of ineffective opportunity fire from one of the Bradleys but otherwise make their way east totally unscathed.  They are making very fast progress towards the edge of the board and I’m worried that the Soviets might actually win this thing in turn 1.

The US player responds by spreading out his Bradleys further along to the east, hoping to catch the Russians before they exit 1st platoon off the board and claim automatic victory.  Three M2 Bradleys try to form a net near the city of Ehrenberg, which is the most likely route for any Soviet advance to come through. 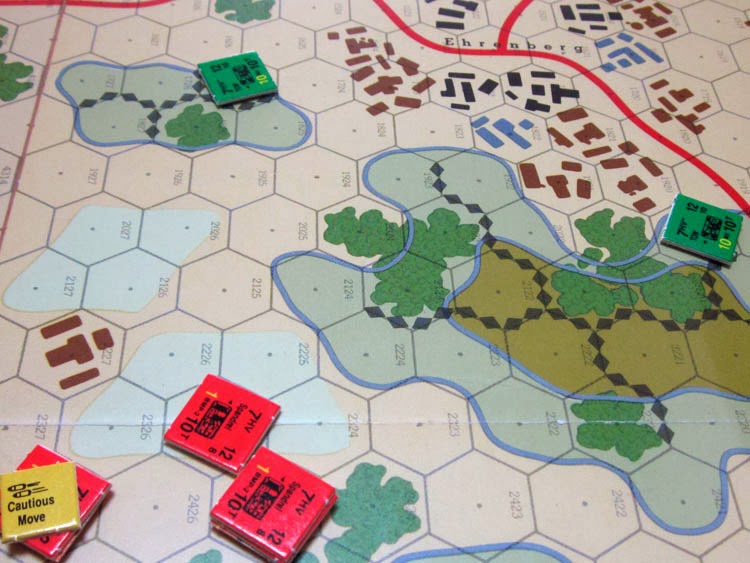 In the next couple of impulses, the Soviets push 1st platoon behind the large hill to the south of Ehrenberg, hoping to swing the vehicles east and then north in an attempt to flank the American M2 Bradleys.

On the next American impulse, a lone M2 creeps up behind the column of BMP-2s as they move behind a large hill.

The Bradley moves cautiously towards the rear vehicle and is about to go for a shot when the BMP-2 changes facing and fires its 30mm cannon into the Bradley’s hull, destroying the American vehicle.  The BMPs change direction after killing the Bradley and decide to make it through the west side of the town, which is nearly undefended after the loss of the M2.

Meanwhile, far to the west on map C, the Soviet 2nd platoon moves up north to engage the other three Bradleys.

By the next turn, the Soviets have had another vehicle platoon activation and they spend it on 1st platoon, which is now within range of escaping the north side of the map and securing a win for the Soviets.

Unfortunately, the Soviets seem to have run out of luck.  The first BMP-2 gets within 3 hexes of the map edge before it is eliminated by opportunity fire from a nearby M2 Bradley.

The next BMP-2 is hit by a TOW missile and immediately eliminated as it gets within striking range of the map edge.  Deciding not to follow in his buddies’ footsteps, the remaining BMP-2 unloads its infantry into the buildings of Ehrenberg and they prepare to use their RPGs on the M2 Bradley across the street.

Far to the west, the Soviets 2nd vehicle platoon tries to salvage the situation.  Since the Soviet victory conditions call for 2 vehicles of the same platoon to make their way off the map, the attention now shift to this other part of the board.  One of the BMP-2s lets off a weapons team with two RPG-16s in the woods south of the town of Fesselsdorf where three M2 Bradleys are skulking around.

One M2 sits near a group of buildings on the outskirts of the town and opens up with machinegun and cannon fire on the encraching infantry.  The Soviets are unaffected, however, and start firing rounds back at the M2.

While the M2s are busy dealing with the infantry, the Soviets send off one of their own BMP-2s to try and make a run through the town and escape to the north.

Unfortunately for the BMP-2 crew, an M2 in the woods takes notice of the Soviet vehicle.  The M2 Bradley fires off a TOW missile, which easily destroys the BMP.

The Americans get an activation next and decide to start hurting the remaining Soviet BMPs.  Another M2 Bradley fires a TOW missile at the BMP-2 on the hill to the south of Fesselsdorf and destroys it.

The Soviets respond by getting two lucky shots off and killing off two American M2s with the help of RPG fire and some good shooting from the remaining Soviet BMP-2.  The RPG-16s run out of ammo and both sides decide to call it a day and break off contact..

The resulting victory points are calculated:
The Americans have accumulated 10 victory points for destroying Soviet vehicles.  They have lost three of their own vehicles, however, which puts them at a total of 4 victory points.  The US scores a marginal win here.

I’m sure I made several mistakes with the rules during this play but I’m getting the hang of things too.  The variable command points and random chit pull really make you think hard before committing to actions.  The fact that you have to spend command points to do anything really helps to make things tense too.  In this game, I found the US quickly lost command points as their vehicles were destroyed and they were actually forced to spend really carefully in the latter half of the game to inflict damage on the Soviets.  It was hard to convey this aspect of the game in the writeup, but it was actually very interesting. The Soviets came close to winning an automatic victory twice and the Americans had lots of good luck and wisely spent their precious few command points.