“Back to Basics” is one of my favorite scenarios from Lock ‘n Load Publishing’s squad-based tactical combat game “Heroes of the Gap”.  Set in the beginning days of World War III in a fictional 1985, this scenario consists solely of infantry fighting it out in confined spaces, up close and personal.  This, in my opinion, is what the Lock ‘n Load system does best and that’s what makes Back to Basics so compelling.

In this scenario, the Soviets are trying to gain control of as many buildings as possible to the west of the Eisenbach River.  The Americans are basically trying to keep their grip and hold the encroaching Soviets at bay.  There are two complications.  First, the Soviets (like always) significantly outnumber the Americans.  Second, the US player is facing not only the regular Soviet army but almost two platoons of Spetsnaz infantry who are armed to the teeth.
The Soviet regulars only have one leader (Capt. Sarukin) but he’s got a Coordinated Fire card that allows him to combine firepower from adjacent units, which is potentially devastating against any spotted American units.  They also have one hero (Yuri), who can be used to try and turn the tide in the Russians’ favor. 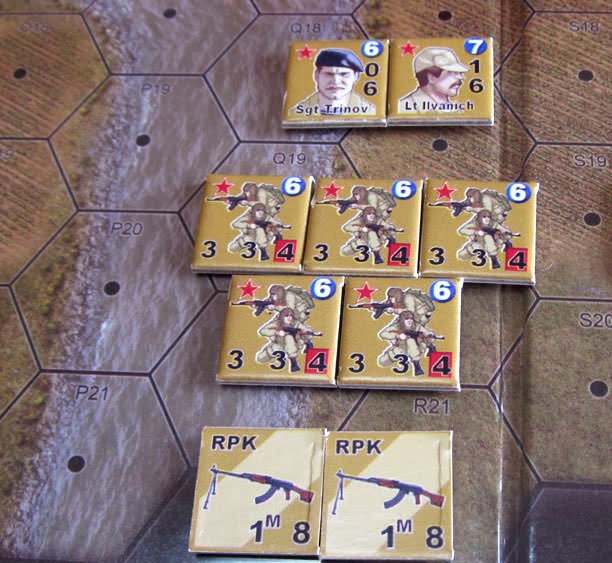 The Soviet Spetsnaz group is quite impressive here.  They get two very capable leaders and 5 squads, each of which has a morale of 6 and a firepower of 3.  To add to all that, they get RPKs, which are highly lethal in melee combat.  Make no mistake, these guys are absolutely deadly and can tear through enemy squads like a hot chainsaw through butter.
There is, however, some good news for the Americans in this scenario. 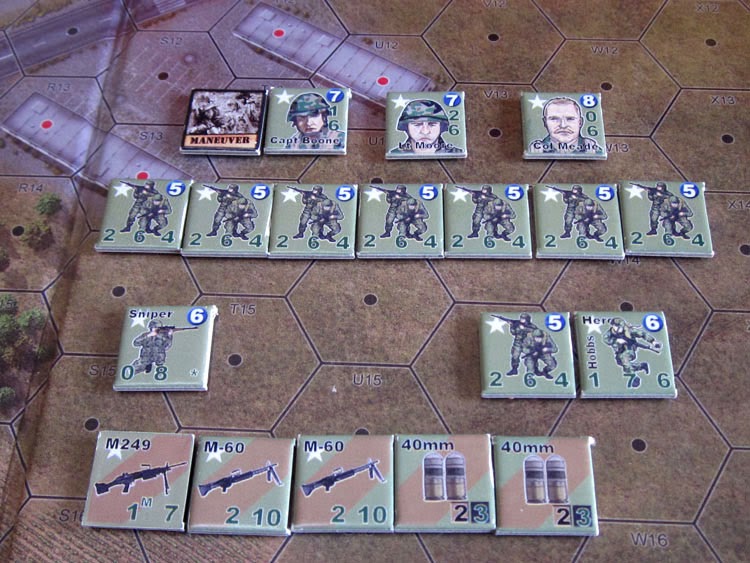 The US player has an impressive amount of firepower and range.  The M-60s with their firepower of 2 and range of 10, are no slouches when it comes to shaking up enemy units.  The addition of 40mm grenade launchers (firepower of 2 at 3 range, firepower 1 at ranges 4-6) could be helpful in beating back the oncoming Soviet onslaught and keep Eisenbach in NATO hands for just a little longer.
Setup
The US player sets up first, with a hero and a squad in the large block of flats near the outskirts of the city.  Col. Meade and a couple of squads stand guard on the west of the city in a small 2 hex building (defensive terrain value 3), hoping to at least delay any flanking move from Soviet forces coming from the west.  Capt Boone and 2 squads (one of them with an M-249 SAW) form an assault team and hang back in the single hex building to the east.
Meanwhile, Lt. Moore is tasked with what seems to be the impossible.  He must hold a huge 4 hex multistory building near the center of the map with only three squads.  They plant themselves in the upper levels of the building, knowing that their position is tenuous at best.  Both 40mm grenade launchers are assigned to the squads in this building.
With the benefit of knowing the US setup, the Soviets carefully pick their starting positions and get set for their assault. 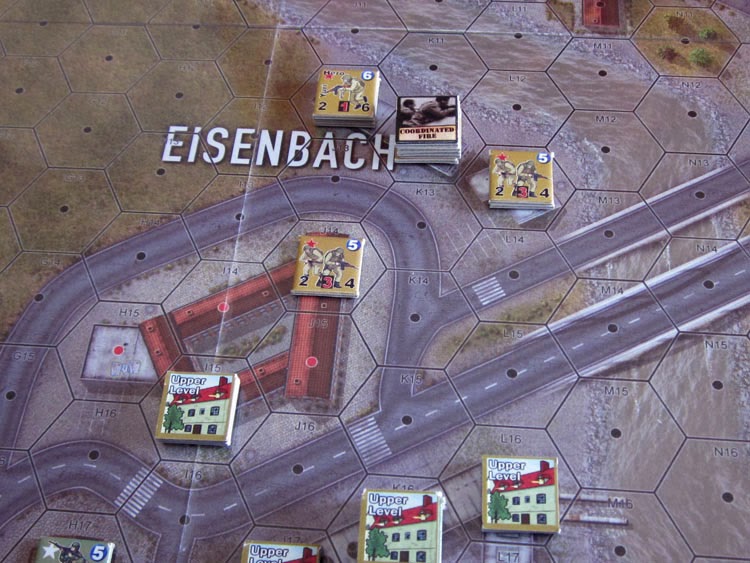 The Soviet regulars set up to the north of the Americans in J12, K12, and L13.  The plan is to basically abandon the position as quickly as possible, take over the large building just across the street that looks kind of like an apartment complex (H15, I14, J14, etc.) and then push south to the building held by Lt. Moore and his squads.  The idea here is to refrain from rushing guys over open terrain to get to their objectives since the US squads have so much available firepower.

Sgt Trinov and Lt. Ilyanich set up near Col. Meade’s forces.  Trinov is positioned in the heavy forest in E15 with 2 squads while Lt. Ilyanich has a formidable assault force of 3 squads, two of whom possess RPKs.
The plan here is to have one group distract and keep Meade and his squads busy while the other group slips by and takes the buildings on the south edge of the map.
We only have a handful of turns to get to our objectives, so there will be no room to stop and get into needless fights.  The idea here for the Soviets is to move, move, move.  Hopefully the Soviet regulars to the north will have enough success to pull the US assault team (Capt. Boone et al.) away and make the Spetsnaz’ job easier.
Turn 1 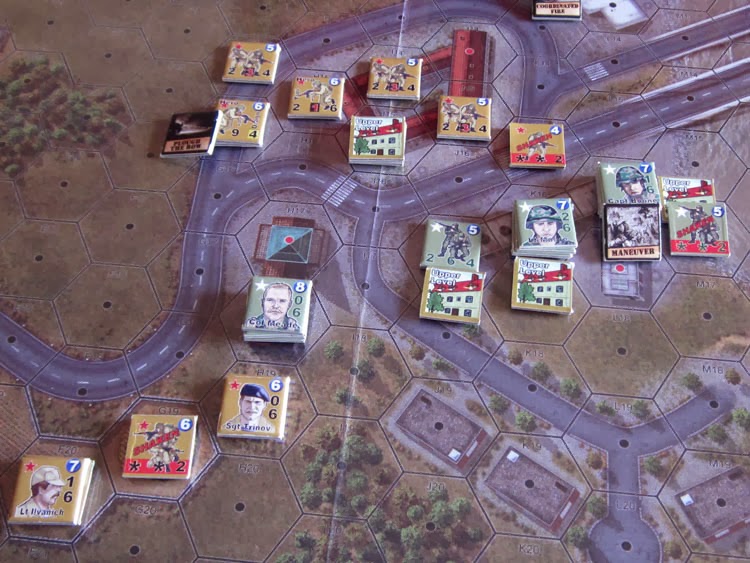 The Soviet regulars, commanded by Captain Sarukin, begin pushing to the south and into the nearby building.  By the end of turn 1, they have near total control of it although the US still has a hero and a squad in one of the hexes.  No matter – they will crush the meager opposition soon.
While trying to sneak a squad around the large building, one of the Soviet regular squads comes under heavy fire from J17 and a Soviet hero emerges.  The Russians now have two heroes on the board, which is excellent news.
I’ve broken slightly with the plan and decided to try my luck with sending some guys straight for the American position held by Lt. Moore.  One of the Soviet squads has gotten into the first floor of the building where Lt. Moore is positioned and this draws the American assault squad commanded by Capt. Boone north to deal with the threat.  The Americans easily win their melee against the lone Russian group.
Over to the west, the Spetsnaz has had mixed success in their attempts at a hit and run on Col. Meade and his two squads.  Lt. Ilyanich sent a squad to try and melee the Americans in the building but it came under heavy fire and was shaken.  This allowed Sgt. Trinov and his men to rush the building and take out one of the US squads in melee. So far, things are looking up for the Russkies.
Turn 2:

Things start to fall apart a bit for the Soviets in turn 2.  Sgt. Trinov and his Spetsnaz squads are shaken by Col. Meade early in the turn and are forced to retreat from the building and over a wall to some cover.   Meanwhile, Lt. Ilyanich and his assault team carefully make their way past the American flank and on towards the small buildings to the east.  Unfortunately, Capt. Boone and his assault team are waiting for them in K19.  An American sniper far to the east is ready to add to the pain if the Russians advance too far.
The Soviet regulars, commanded by Capt. Sarukin, have completely taken over the apartment complex and are now trying to assist the Spetsnaz in taking out Col. Meade.  One 2-3-4 squad sneaks past Lt. Moore’s position and is adjacent to Col. Meade.  A lucky roll might shake the nearby Americans up next turn and rip the US flank to shreds.  Several attempts to send squads from the apartment complex into Lt. Moore’s building are unsuccessful.
Turn 3: 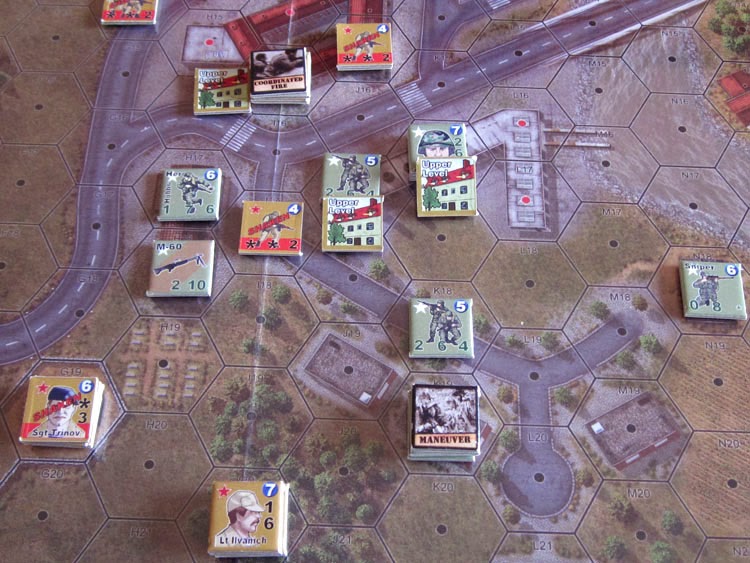 Turn 3 holds some disappointments in store for the Soviets.  It starts with Sgt. Trinov, who is unable to rally his team.   To worsen matters, a Soviet squad adjacent to Col. Meade lets loose with AK-47s but the only result was to produce a US hero.
Both Soviet heroes are KIA.  Drago moves into the building with Col. Meade and eliminates everyone but the US hero before getting killed.  Yuri makes an ill-advised attempt to breach the building across the street from the apartment complex and is peppered by US fire.
Capt. Sarukin is now finally in position with a machine-gun team to the north of Lt. Moore but there is hardly anyone left to command at this point. Shaken Soviet squads retreat back to his position to be rallied for another push south.
With Sgt. Trinov’s team shaken, Lt. Ilyanich cannot move for fear of Boone’s forces moving in and melee’ing his comrades.  They sit uselessly in I20 as the Americans refuse to take the bait and wait in K19.
Turns 4 and 5: 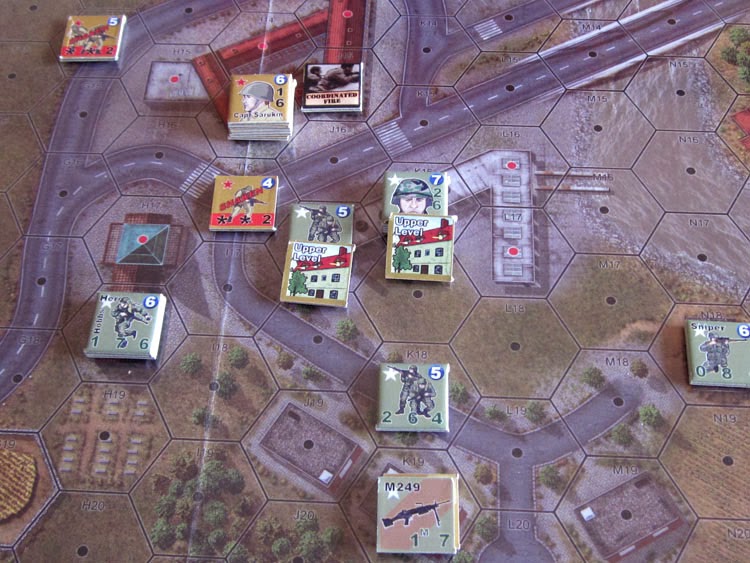 It’s late in the game and things are not looking very good for the Soviets so they go for broke.  Lt. Ilyanich and his assault team attack Capt. Boone and his assault team.  They both completely eliminate one another in one fell swoop.  Trinov rallies his men and advances east to start taking the town’s buildings.  Rushing through sniper fire, they claim three buildings in the south, two of which are unfortunately taken back by the nearby US squad.
Captain Sarukin rallies a handful of men, who can do nothing except catch the attention of Lt. Moore’s men and die by the dozen.  This helps keep Trinov’s men from the bulk of the American fire but the result is negligible.  There are too many Americans in Trinov’s immediate vicinity, which prevents securing objectives.  By the end of the game, the Russians are defeated handily. 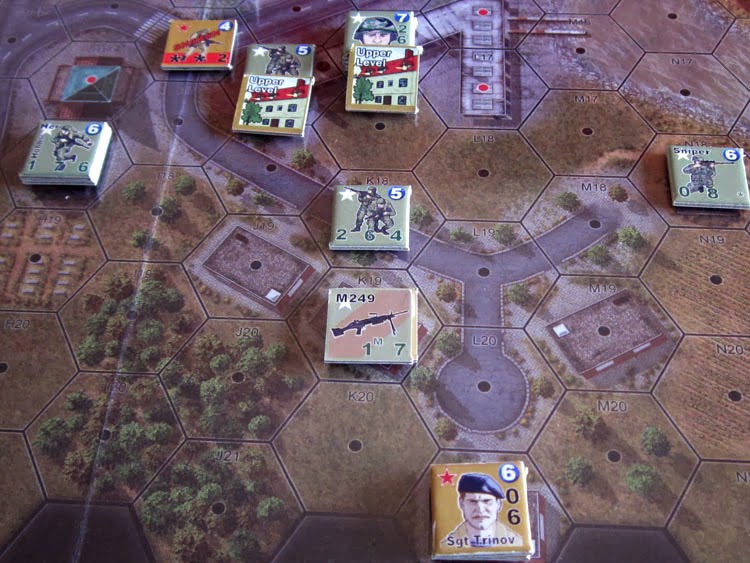 Conclusion:
I’m not really sure what went wrong but I’m skeptical of blaming luck for the Soviet loss.  If Ilyavich and Trinov had worked together in eliminating Meade and his squads on the flank in the first couple of turns and then focused their attention on Capt. Boone and his assault squad, I think things would have turned out more favorably for them.
I strongly believe, however, that the key to winning this scenario is taking and controlling the H15 apartment complex with your regulars and then dominating the Americans with one massive push.  Early on in the game, I sent two Soviet regular squads south to get to Lt. Moore and his men but the gains were only temporary and the end result was a piecemeal effort by the Soviets that the US player easily crushed.
The Americans more or less played as they should have.  Protecting the northern and western approaches to the city while holding an assault team in reserve to deal with any potential incursions was immensely helpful in preventing Soviet breakthroughs.