Another recent purchase of mine is John Butterfield’s “D-Day at Omaha Beach”, a solitaire offering published by Decision Games.  I had heard a lot of good buzz about this game since the first edition was released in 2009.  The game was so popular that it was kind of hard to get hold of until the new edition was printed last year. 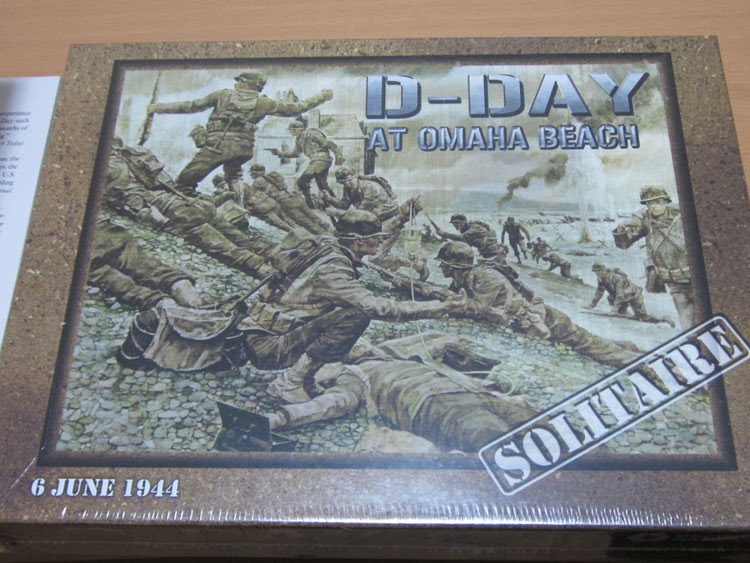 So this thing arrived and it was impressive right off the bat.  The box art is wonderful and features a single powerful image that the words “Omaha Beach” conjure forth in most people’s minds.  I thought this image was much more evocative than the one used for the first edition and the sides of the box have the look of wood grain, which matches the art nicely.  So immediately, I had the sense that good things awaited inside of this box and I wasn’t wrong. 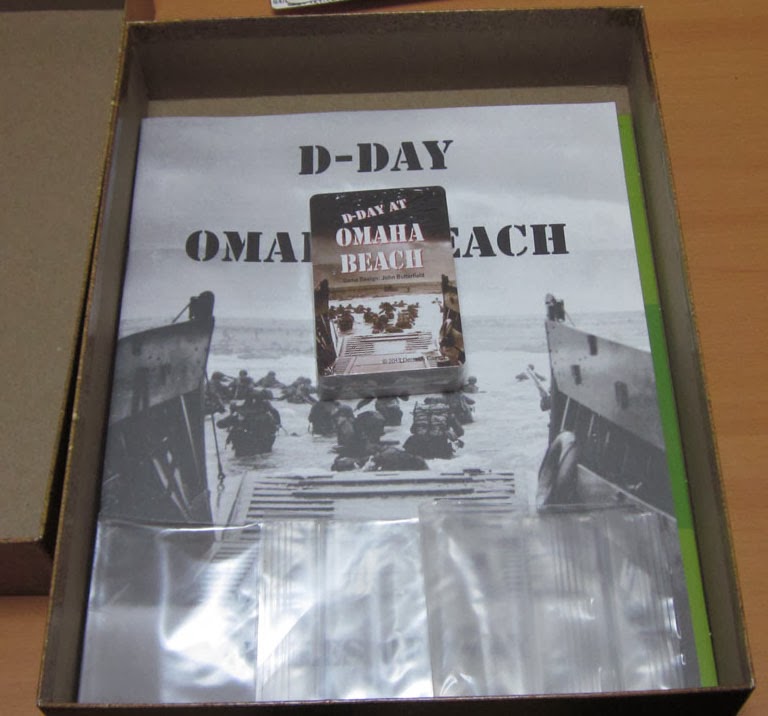 Inside the box, we have some plastic baggies that were kindly provided by the publisher.  I always love to see this even though I almost never use the bags.  We have a large deck of cards, nicely wrapped and several booklets with a map underneath everything.  The box is a bit deeper than it needs to be, but that’s not a real issue. 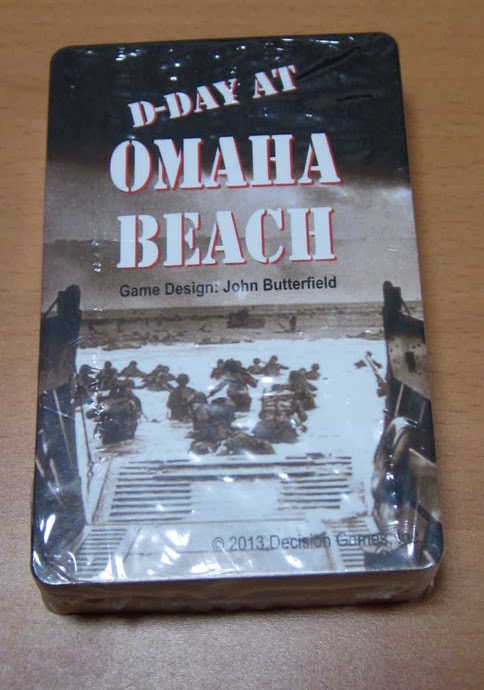 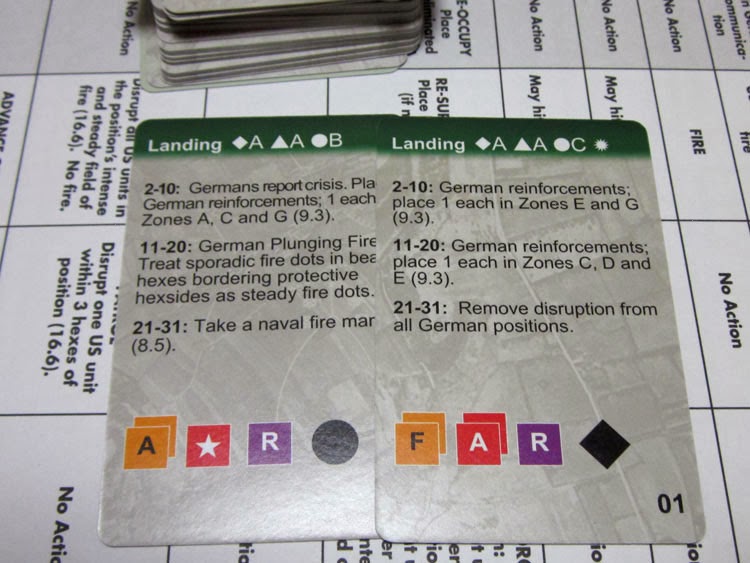 The cards look nice and the back bears the iconic image of American troops wading ashore in the early hours of June 6, 1944.  It’s a very nice choice of pictures that helps bring out the feel of theme during gameplay.  This is important because these are the cards that will be pondered over, cursed at, and worried about throughout the course of the game.  The fate of the 1st and 29th Division on that fateful day hinges on these things so it’s important they look and feel right, which they do. 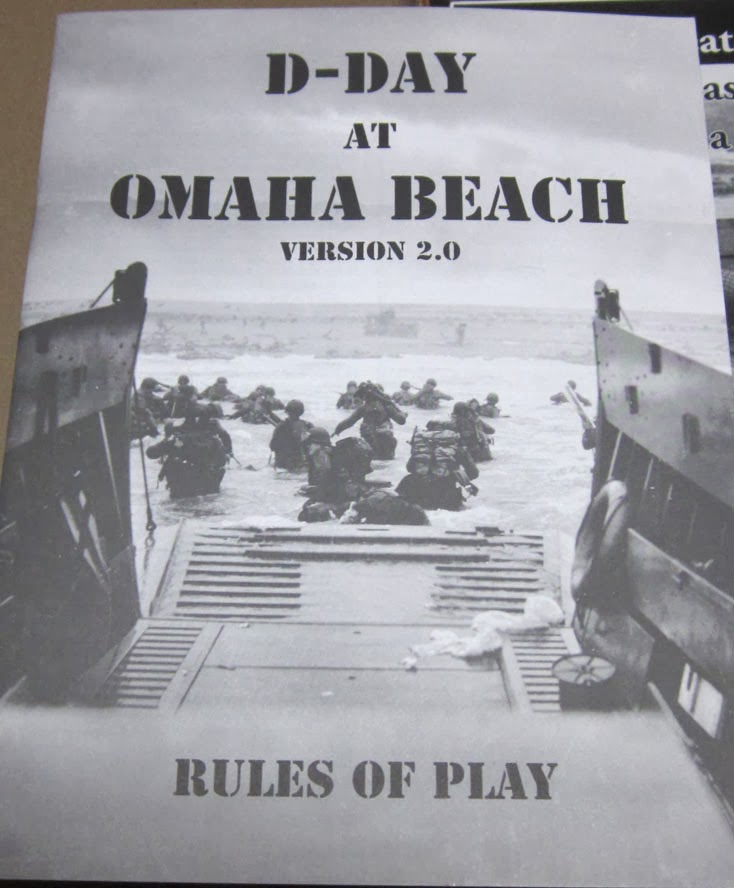 The rulebook is well-organized and looks nice.  It has a standard font and it is in black and white.  Nothing special here but so far, there’s nothing bad. 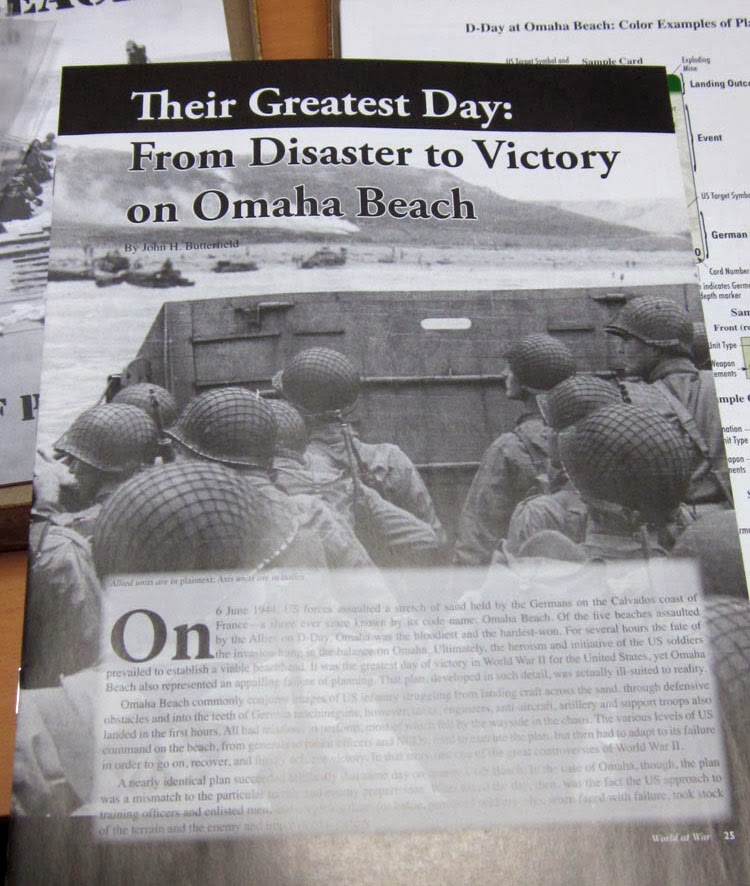 Below the rulebook, we have a great little booklet that gives a great rundown of the battle for Omaha Beach.  Although the cover is black and white, most of the images inside are in color.  It’s well-written and helps bring the game’s events alive.  It also gives a very good sense of just how close Omaha came to a terrible defeat for the Allies and the almost superhuman efforts involved in taking out the heavy German fortifications. 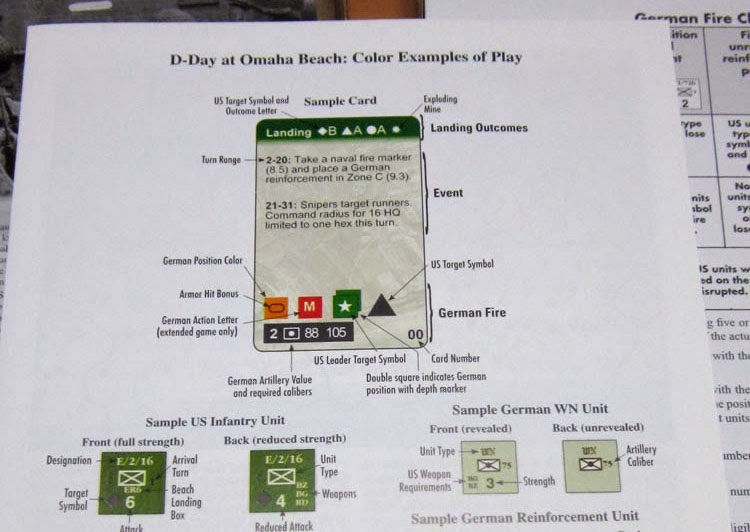 Underneath the history book, we have another booklet full of examples of play.  It’s entirely in color and it was extremely helpful in my first few plays. 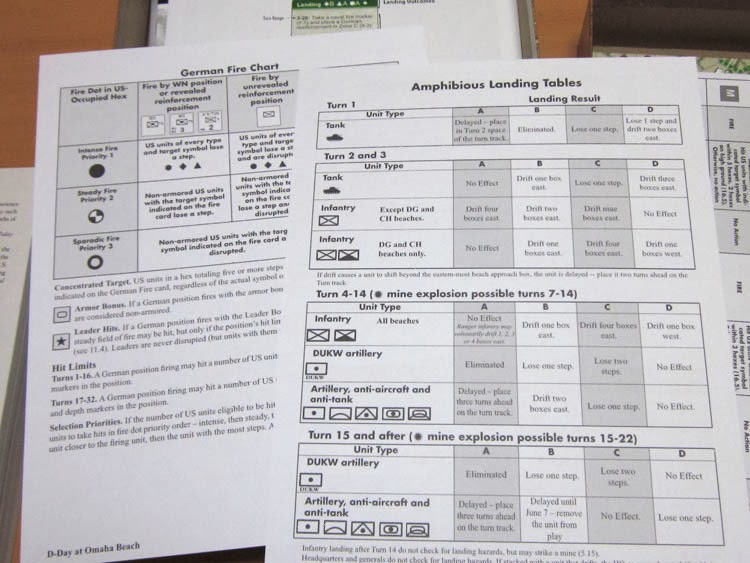 Charts and landing tables are next.  They are uncluttered and presented in a nice clear way.  I worry about their overall durability but the paper is thick enough stock that I think it should be fine.  This is good because you’ll be referring to these a lot throughout the game. 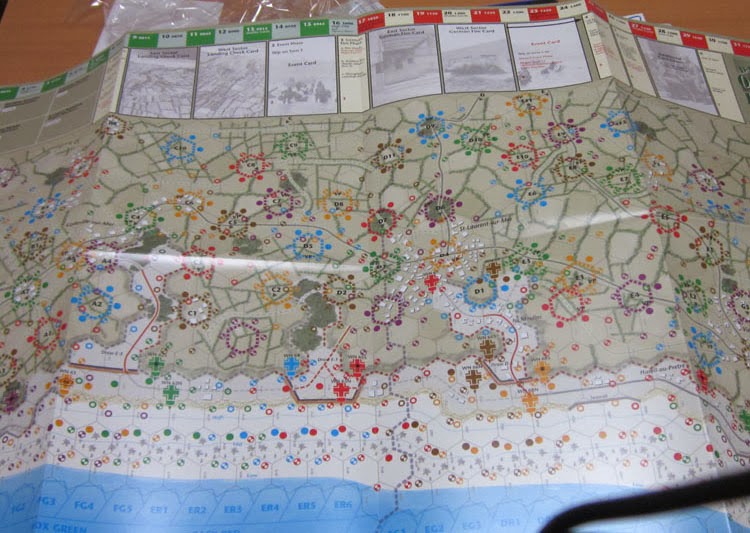 Finally, we have the map, which is full color and on paper.  The map covers both the 1st and 29th Division section of the beach.  People seem to either really like the map or hate it.  I think it works well and the fact that fields of fire are already printed on there helps to really reduces the constant need to check charts, etc.

The last thing in the box are two counter sheets.  The counters are nice and thick.  I didn’t see any problems with printing on them and information is clearly presented.  They aren’t terribly exciting in terms of artwork but they serve their purpose well. 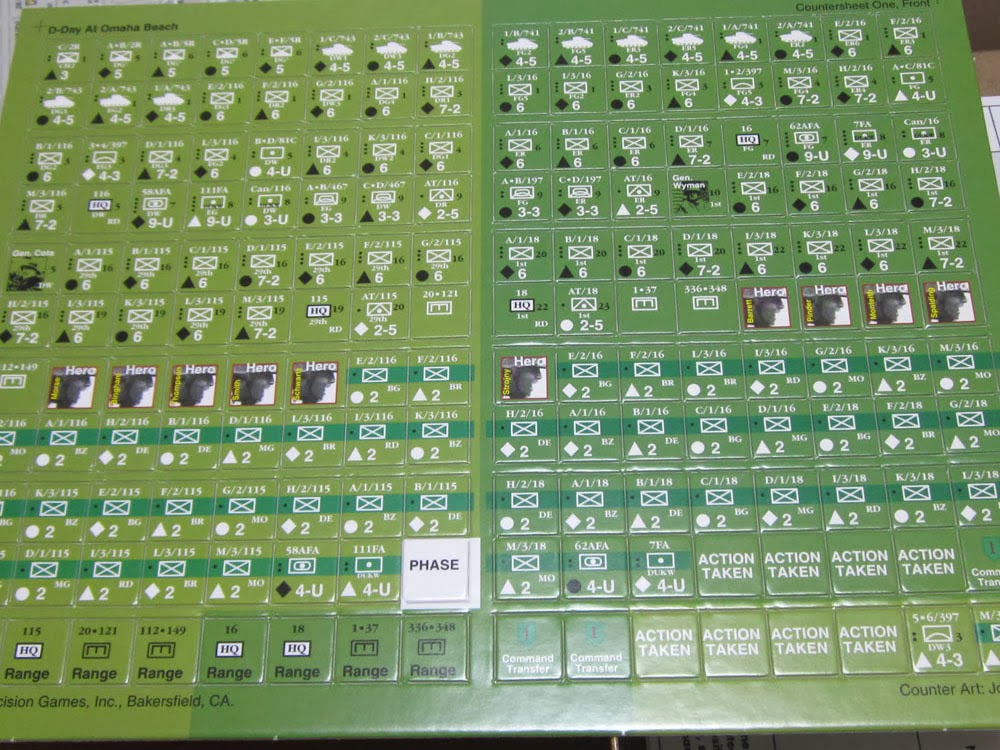 Here’s a closer look at the counters. 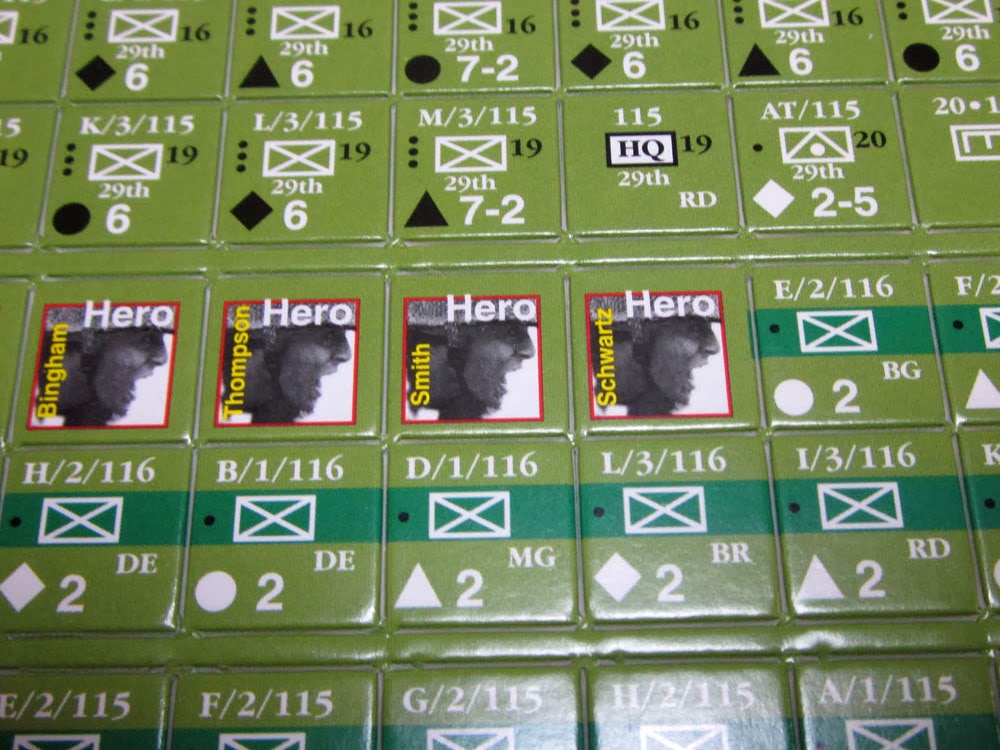