All content published herein is copyright 2017, Brad Smith. Images are either stock photo standard rights or public domain. Please contact me at this domain if you wish to use any of the material or images posted to this site.
Since I’ve been on a World War III gaming kick for the past several years, I decided to purchase West End Games’ Fire Team, a game of squad tactics published in 1987 by the now defunct company.  It was designed by Jon Southard, who created a bunch of great games in the 80’s like Carrier and Tokyo Express, to name a couple.  This is another one of those ‘Cold War Turned Hot” games that fell victim to the sudden end of the Cold War rather than suffering from any real design flaw or lack of imagination (for another example of this, check out AH’s Tac Air).  In fact, the effort that went into creating Fire Team, a game that tried to simulate modern command and control on the platoon and squad level, was pretty much unrivaled at the time of its release. 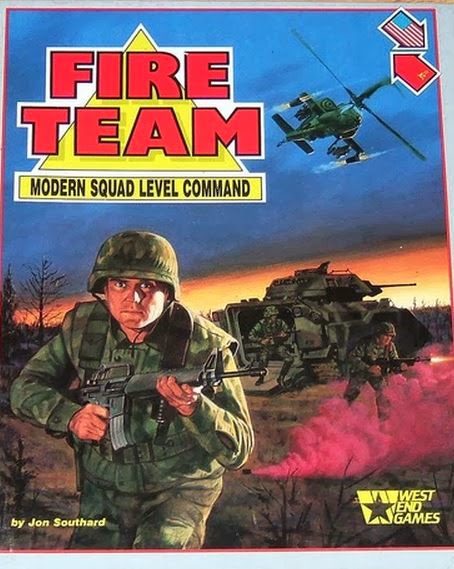 Fire Team has about a dozen scenarios that feature the big bad Soviets running wild over the plains of West Germany in 1987 as NATO tries its best to halt them.  The scenarios vary widely in both the number of forces involved and the kinds of objectives that each side needs to accomplish in order to win.  The first scenario, “The Balloon Goes Up” is kind of a beginner’s scenario with limited forces designed to get players used to the rules system although all of my plays so far have devolved into “sit and shoot at each other” affairs that didn’t really move me much.  The more advanced scenarios, however, feature tank platoons, infantry companies, and artillery and helicopters working together and I found these much more engaging. One great aspect of the scenarios is that they all involve the forces doing things that they likely would have been doing in a real war (reconnaissance, trying to control major roads, delaying actions, etc.), which adds a lot to the game.

Fire Team’s mechanics are powered by the twin engines of chit pulls and command points.  Players take turns pulling a chit from a cup to see which side will get to go next and how many command points that side gets to spend on activating platoons, squads, vehicles, etc., or they can be used to rally guys who aren’t performing well.  This brings me to another interesting game mechanic, which is “Fear”.  When your guys come under fire in the game, they can incur “Fear points”, which basically reduces their effectiveness in fighting and moving and it also makes them harder to command.  Once enough Fear points are incurred, even a totally intact platoon or squad becomes useless in a fight.  It’s often easier to let these guys cower and spend your precious command points on squads that are performing well.  This is a nice mechanic that tries hard to model how people react under fire and how hard it is to get guys to pick themselves up, dust themselves off and get moving on to their objectives.

Another cool aspect of Fire Team is that the Soviets and Americans fight differently according to their own doctrines.  This is reflected in the differing command point costs for each side.  The Americans can get a squad or fire team moving with the expenditure of only 1.5 command point while the Soviets need to spend 2 points for the same.  On the other hand, it’s less costly for the Soviets to activate an entire platoon than the Americans, with the one caveat that everyone in the Soviet platoon has to do the same thing in one turn (i.e. everyone moves or everyone shoots – no mixing it up here).  This is a really nice attempt to model doctrine and it forces you to think hard about what to do with your available forces.  The American player needs to know how to use each little piece of firepower to interact effectively while the Soviet player needs to know when to push hard and accept that a good chunk of his guys are never coming home.

A lot of people have said that Fire Team was Jon Southard’s attempt at designing a modern and more playable version of Advanced Squad Leader.  Not having played ASL, I’m not sure I can speak to that.  However, I do get the impression from what I’ve read that he sort of succeeded in some places thanks to the command point system and a modest set of rules that was adequate for modeling squad battles but not pushing the mechanics beyond their breaking point.  There are basic, advanced, and optional rules in the book and I found myself playing at the advanced rules level with some options at around the third or fourth play so I think that’s a very good sign.

One thing that should be noted is that the “Fire Team” rule book alludes to upcoming “follow on” modules that were to use the game’s core rules for playing out battles that featured various other NATO countries fighting against the Warsaw Pact.  It’s really a shame they never delivered on this intention as it certainly seems like they had a decent system more or less nailed down.  Everything in the rules seems quite reasonable and intuitive after sitting down and playing through a couple of scenarios.

Finally, we get to the components.  *Deep breath*  Okay…even though the game was produced in 1987 and the map and counters cannot be fairly held up to today’s standards, I believe that more could have been done back then to make Fire Team a much better game in terms of components.

The game’s counters suffer from a lack of care in production.  The counters are made of thin cardboard with red counter backgrounds for the Soviets and green ones for the Americans.  Not exactly creative genius here, but that’s okay.  Squads of men are drawn in as sort of blobby figures while leader counters all have the exact same face drawn on them, giving off the impression that NATO and Soviet forces consist of a secret clone army of which only Yoda could be proud.

I’m not sure about the printing of other people’s games, but it was way off on my counters with numbers completely cut off either at the top or the bottom.  This would have been unacceptable even back in 1987.  The back of the counters is missing key information because of the cut so I had to constantly refer to a game forum to find the right values.  This was extremely frustrating and I wanted to punch someone in the throat by the time I finished the first scenario.

The maps are paper and they are not beautiful by any means but they are functional and seem to work okay for what they are meant to do.  You get a standard set of terrain that includes forests, towns, bridges, and roads, etc.  Some maps have hills with varying heights and crests which are great for plunking down a machine gun team or a tank upon and letting rip at the hapless enemy squads below.  Since the maps are geomorphic, you’ll be reusing them in various configurations for the scenarios but they work quite well in giving players interesting terrain to fight over.

Overall, Fire Team is worth revisiting because a.) it is a fun game with interesting scenarios and b.) it has some pretty interesting mechanics that provide players with lots of cool decisions.  The game didn’t get half the recognition it deserved when it was released but the components certainly couldn’t have helped make its case to the wider gaming community.  If only WEG had invested a little more love (and cash) here, I wonder what could have been.  If you’re at all interested in the “Cold War Turns Hot” setting and you can’t get enough of games like LnLP’s  “World at War” series and “Heroes of the Gap”, you can’t go wrong in checking out Fire Team.  It’s still widely available from online used game sites and I got my copy for a fair price.