From 10-14 June, 1944,  the US 101st Airborne Division fought against the German 6th Parachute Regiment in the small rural town of Carentan in Normandy, France.  For the Americans, winning the battle meant consolidating the Normandy landing beach heads.  On the other hand, the Germans needed the town to mount counterattacks on the nearby Allied landing force.

The battle is represented in Lock ‘n Load Publishing’s WW2 squad-based game, Band of Heroes.  Here’s how my playthrough went.

The American objective is to head east into the town and take as many buildings as possible away from German control while the German objective is to stop them.  The scenario lasts 7 turns. The U.S. player gets 9 Fate Points that can be used to alter dice rolls in their favor.  It’s a tough scenario for both sides with lots of tight close-in fighting through narrow streets and buildings cramped with the enemy.  I tend to lose a lot with the Americans when I play this scenario.  Usually, I’m not aggressive enough and the clock runs out.  This time, I’m determined to play things through a little differently after brushing up on WW2 infantry tactics.

New units come on for both sides over the course of the scenario’s first three turns.  However, the scenario starts off with just a few forces on the map.  On the west side of the town, Major Tom and a platoon run in while Cpt. Weiss and his MG42 machine gun team in the center of the map await the Americans’ approach. 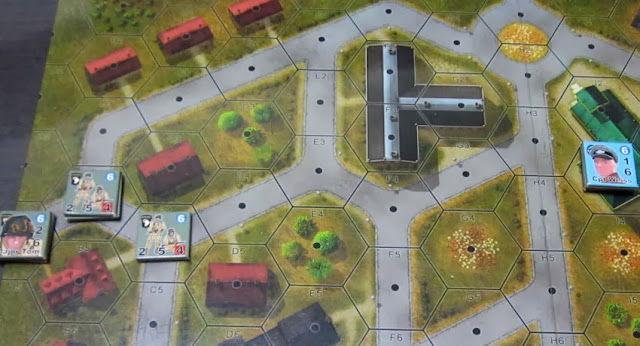 The US player decides to hook his forces towards the large building opposite the German machine gun. 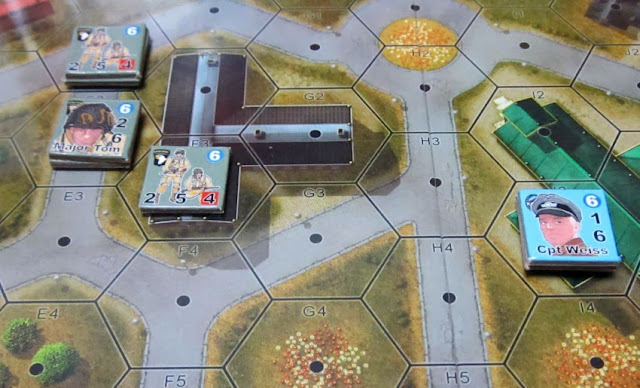 The MG42 fires at the lone American squad in F3 to no effect.  Turn 1 is over.

Major Tom moves with the rest of his platoon into the nearby building.  Sgt. Hill and his platoon enter the board and head for the south side of the town.  The Germans place their new forces in the south and spare a single squad to reinforce Capt. Weiss’ machinegun.   They fire on Major Tom’s platoon in the nearby building with tremendous firepower.  Using 3 fate points, the American player reduces the German roll and the US squad under fire remains unshaken.

The US player has initiative and goes for broke.  Major Tom sends out one of his squads with a BAR rifleman to get into the building across the road.  The squad gets adjacent to the German 2-3-4 squad and the expenditure of 3 fate points leaves it unscathed from German close range fire. 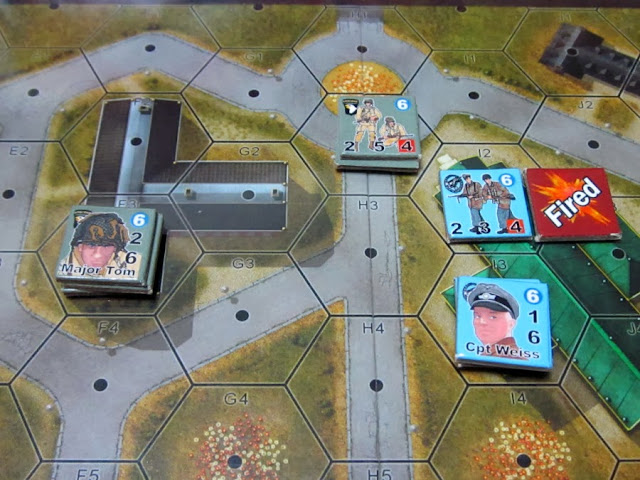 The American squad jumps into melee with the Germans in J2 and they battle it out.  The US player splurges his 3 remaining fate points in the battle and takes out the German squad.

Major Tom orders the two squads with him to pour fire on the German MG42 commanded by Capt. Weiss.  Weiss is shaken by the American fire.

Further south in the town, US forces keep moving.  Sgt. Hill sends up his 1-4-4 with a .30 cal MG to set up a base of fire in the building across the street from Lt. Frietag.  Lt. Michael enters the board and decides to get his platoon into a building close to the center of the board to help reinforce successful American assaults to the north and south.  A 1-4-4 squad with a satchel charge and a 2-2-6 US hero (named “Private Ash”) are sent towards Major Tom to help keep the northern American flank pushing hard. 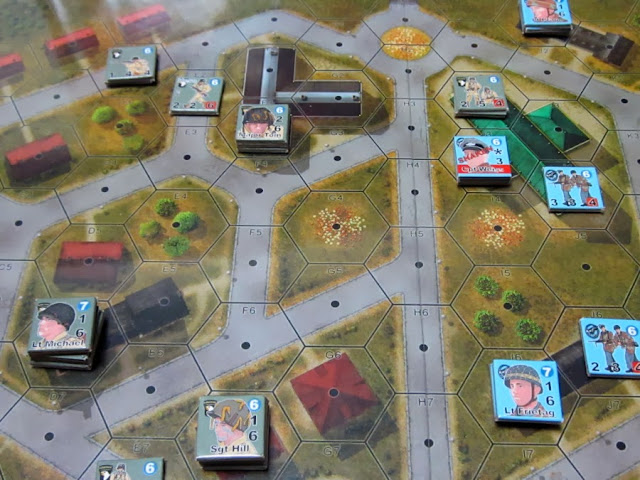 Lt. Praun gets to set up his forces and chooses to reinforce the crumbling German defense in the north of town.  One squad is placed with the shaken MG crew under Capt. Weiss while a 3-3-4 is put in J4 next to the machinegun crew.  If the Germans can grab initiative next turn and rally the machine gun, they can probably repel the US incursion in J2.

This turn was completely nuts.

With all the forces now on the board and bullets flying everywhere, it was time for craziness to happen.

Much to the Germans dismay, the Americans retained initiative.  The German machinegun with Capt. Weiss rally but they are immediately shaken again by Major Tom and his two squads firing from F3.  The Germans move up their 3-3-4 to attack the American squad before it can take out the shaken machinegun crew.  The rolls go badly for the Germans and the US 2-5-4 in I2 wins out in the ensuing melee. 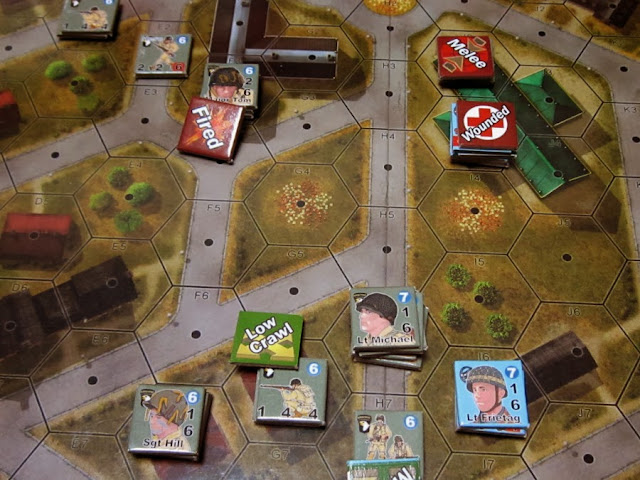 In the south, things get harder for both sides.  Lt. Frietag sends up a squad from J6 to help keep the machinegunners to the north alive.  Despite copious opportunity fire aimed at it, the Germans make it to I3 safely.  The US player decides to make a push for the south side of town, which now has only Lt. Frietag and a squad with an MG34 in I6.  Sgt. Hill sends out a squad to H7, adjacent to Frietag.  The Germans hold their fire, however, which throws a wrench in the American plans.

Lt. Michael decides to give Frietag a target he can’t refuse, however, and his entire platoon is sent to melee the Germans.  The Germans MG34 cuts down the approaching Lt. Michael and his platoon, shaking one squad and reducing two.  The men lay in the middle of the street with bullets splashing all around the blood-stained cobblestones.

Sgt. Hill then tries for a final assault on Frietag’s position.  With only a squad at his disposal, he will be at a disadvantage in the ensuing melee. 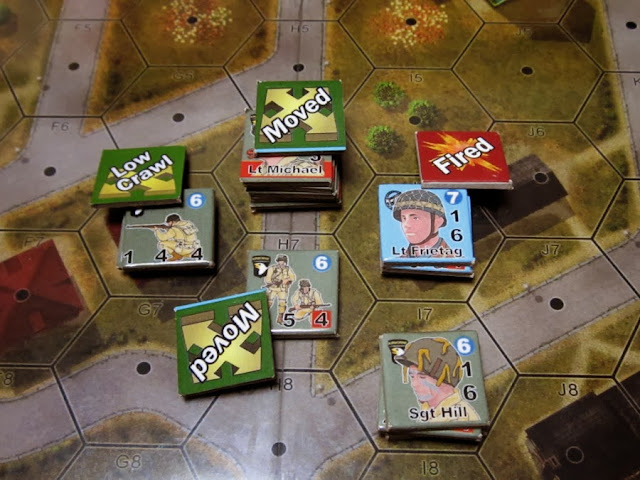 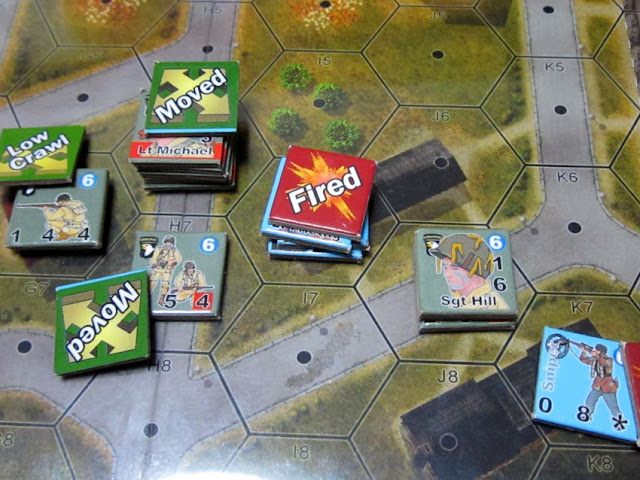 a sniper starts firing at them from a nearby building!

Luckily for Hill and his crew, this is the worst sniper in the world and the enemy shots go wild.  The entire squad does an about face and melees the sniper in K7, instantly eliminating him.

With Frietag occupied down south, the Americans in the north of the town can easily move their reinforcements east.  The US hero, Pvt. Ash, jumps into melee with the good order 3-3-4 German squad stacked with the shaken Capt. Weiss and his machinegun crew. 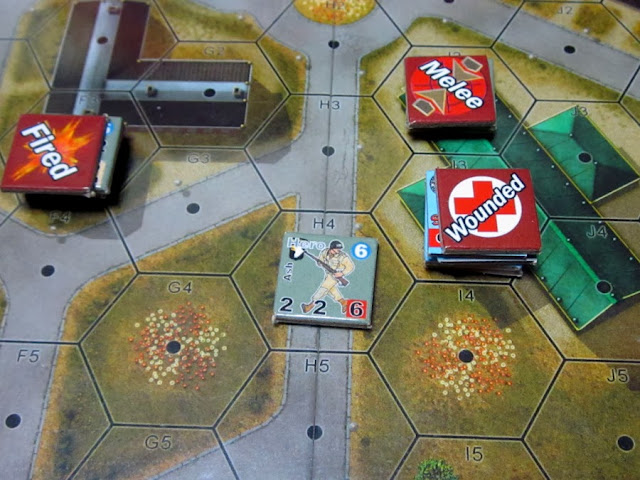 Ash clambers in the window and starts throwing grenades left and right into every nook and cranny of the building.  He eliminates the Germans in the squad in a blaze of glory but is killed in the process.

A lot of stuff happened this turn and it was hard to keep track of it all.

With all the excitement of the last turn, I was losing track of objectives.  This had become a bitter slugfest and it was far from over.  The Germans were definitely hurting more than the Americans but I had the feeling they weren’t out of the game yet.

On the first activation of the turn, the Americans spent the first round of their initiative shooting fruitlessly at Lt. Frietag and his squad from nearby hexes.

Lt. Frietag responded by moving into the adjacent Lt. Michael’s hex and eliminating his entire platoon in H6.  In one fell swoop, the Americans had lost a third of their entire attacking force.

On the north side of town, the US 2-5-4 squad with the BAR rifleman dash out of the building hex in J2 in an attempt to melee Lt. Praun and his MG42 machinegun. 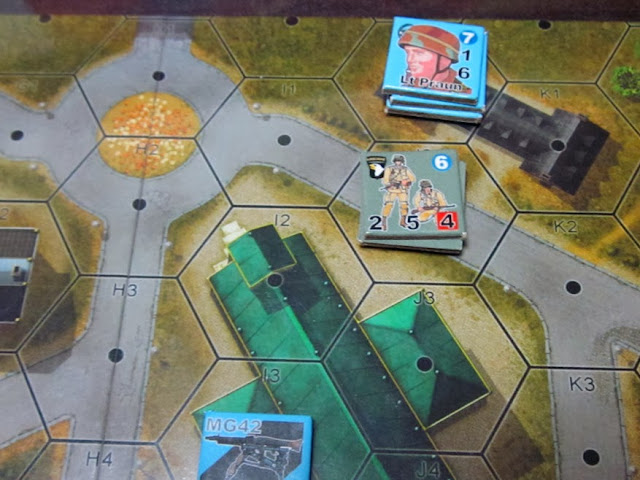 The German machinegun fire shakes the squad but a US hero is created.  The hero heads east to take the buildings and start achieving American victory conditions. 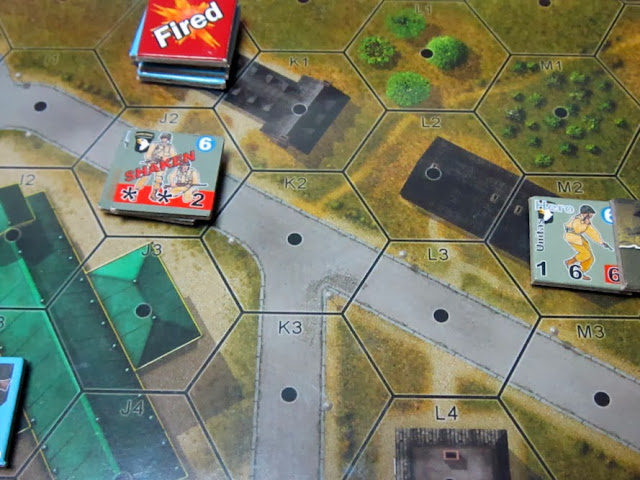 Major Tom decides to take out Lt. Praun and his machinegun crew in J1.  He sends a 1-4-4 squad with a satchel charge along with two 2-5-4 squads into the building for a melee.  The satchel charge takes out the Germans but the building collapses down on everyone in the process.  Both the Americans and the Germans are eliminated.

Sitting in the middle of the street after the melee with the Americans, Lt. Frietag rested with the rest of his squad.  The Americans streamed from all around them as fire raked their position relentlessly.  No prisoners were taken as Sgt. Hill moved in and eliminated the German paratroopers. 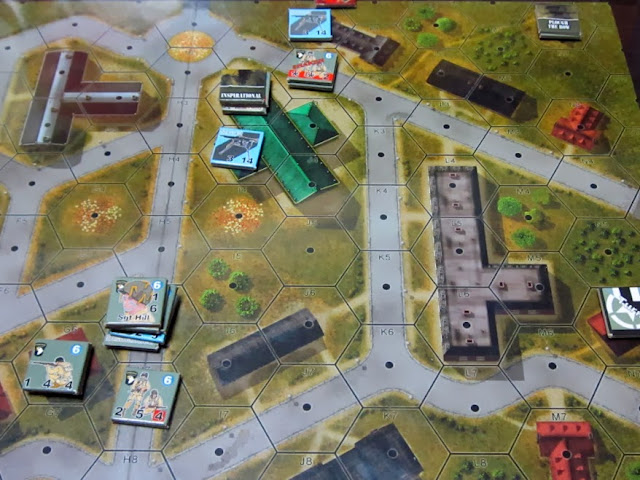 With one turn left and no Germans on the board, the US wins a major victory in Carentan despite some very high casualties.