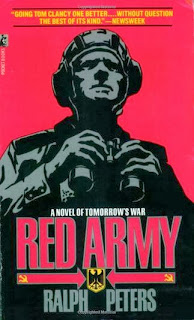 Have some pity for Ralph Peters, whose lovely novel about World War III in Central Europe was published in 1989 by Atria Books, just in time to see the end of the Cold War and the radical political transformation of Europe.  Red Army is a work of fiction that focuses on the men behind the Soviet military machine and the ordeals and triumphs they would encounter in an invasion of West Germany.  In a sort of mirror-image of Tom Clancy’s Red Storm Rising, the novel is told from the perspective of Soviet army troops all the way from a terrified infantryman to the charismatic General Malinsky, commander in charge of the First Western Front, as they push their way across West Germany in the ultimate showdown of modern arms.

To his credit, Peters meticulously avoids providing details about weapons systems, hardware, or fighting vehicles.  This lets him keep away from getting bogged down in arguments about the range of a specific missile or the capabilities of a certain tank, another major difference from Clancy’s near technophilia in certain sections of Red Storm Rising.  The emphasis here is directly on the human being.  Characters are given some background story without side-tracking the novel too much.  We recognize these characters as average human beings trying to function and survive in unthinkable circumstances.  Some of them are cowards, others are bullies, while some are good men whose strong sense of morality is severely tested over and over again throughout the book.

Looking back at Peters’ predictions from the vantage point of 25 years later, there is much that he seems to get right.  He comes back again and again to the lightning-fast speed of modern warfare that takes both sides by surprise.  Furthermore, this unanticipated speed has a “ripple effect” that creates further problems in terms of communications, logistics, and support seems to be on the mark as well.  The speed of advance during the Gulf War in 1991 and the Iraq War in 2003 seem to bear this out as a solid prediction.   The rapid advance of the Red Army over the course of three days pushes men and computers up to, and sometimes beyond, their decision-making capacities.

On the other hand, the author probably gave too much credit to the Soviets at certain times.  It seems clear that Peters based his book on NATO estimates of Soviet military capabilities that were shown to be false after the collapse of the USSR.  By the time of Peters’ writing, the Soviet army was thoroughly demoralized from its loss in Afghanistan and the economic reforms of the Gorbachev era coupled with the stagnant Soviet economy had left the Warsaw Pact in very rough shape.  It is doubtful that the Soviets could have successfully fielded the forces necessary to fight a war against NATO as described in the book.  The scale of deterioration among the Soviet military by the time of the USSR’s collapse surprised everyone, so this does not seem to be a result of a disingenuous author but rather a reflection of the scant information available at the time of the writing.

Fans of “Cold War turned Hot War”type of games and movies would almost certainly enjoy Peters’ book.  As a work of military fiction, it works well on its own terms.  The characters are believable as people and the problems they attempt to solve are credible and interesting.  It makes for a great counterpart to other military fiction written at the time that was primarily written from the western perspective.