Dial 411 For Information is the name of the first scenario for LnLP’s World at War expansion titled “Counterattack”.  The Counterattack expansion is a single book loaded with scenarios that form two campaigns that revolve around the efforts of two groups of NATO soldiers in the middle of World War III.  I won’t give too much of the background story away here for those who are interested in purchasing it.

In this scenario, Task Force Eagle is given the overwhelming job of rescuing a group of prisoners with valuable information.  They are sent up against an entire Soviet Motorized Regiment, which is spread out through three cities on the western edge of the Blood and Bridges map.  This task is complicated by the fact that TF Eagle has no idea in which of the three cities the POWs are located (you have to roll a die to determine their location so I’m not giving any spoilers away here with this report) and they only get 8 turns to snatch the prisoners and get the heck out of Dodge.

TF Eagle has a couple of distinct advantages thanks to the Special Scenario Rules and it also has a bit of artillery to help get the job done.   Most importantly, TF Eagle has two formation markers while the 62nd MR only gets one.  Getting lots of repeated activations is the only way I can see them succeeding here. 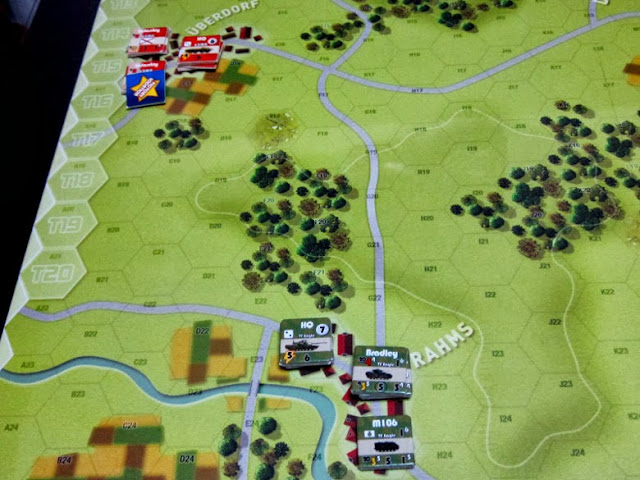 Turn 1 starts and TF Eagle decides to hit Uberdorf first off and check if there are any prisoners there.  Things go poorly in the first turn for TF Eagle as they send out a Bradley, which is immediately disrupted by Soviet Sagger anti-tank missiles.  The first couple of turns bear little fruit for TF Eagle’s efforts as they spend valuable time firing ATGMs and pouring Abrams tank fire into the south part of Uberdorf.  Not only did TF Eagle fail to get a second activation throughout any of these initial turns but the Abrams’ tank gunners must have been really tired that day because they rolled so poorly that they failed to inflict any considerable damage on the small Soviet contingent in the city.

In a huge stroke of luck for TF Eagle, the Soviet Sagger team ran out of ammo after taking out a Bradley platoon and the tide slowly turned in the Americans’ favor.  A platoon of Abrams managed to score a disruption on the Soviet infantry and TF Eagle HQ and another Abrams platoon raced into the city by the end of Turn 4, somehow managing to avoid huge volleys of opportunity fire from every corner of the map.  They assaulted the hex and scored a disruption roll on the Soviet infantry in the city,  pushing the Russkies back one hex. The American player rolls a dice to determine if prisoners are located in the hex and miraculously locates and frees them.

But it was far from over.  TF Eagle had to haul the liberated POWs back to the south edge of the board under withering fire and pursuit from the 62nd MR.  With only a handful of turns left at this point, it seemed that things could go either way.  The Abrams tanks managed to continue their streak of missing Soviet tanks (at this point, they had failed to score anything worse than a disruption for 6 straight turns).  TF Eagle infantry sitting on the hill approached the 62nd MR HQ as it struggled along the southern crest of a hillside for a better shot at the escaping American POWs but was stopped cold in its tracks by opportunity fire.  Amazingly, it was the M106 mortar platoon that managed to disrupt the Soviets on the hillside.

This unexpected disruption to the Soviet plans ended up saving the day as the POWs made their way into the forests to the south and found the exit hex while the rest of TF Eagle plunked away at the pursuing Soviet tanks in vain.  The last opportunity for the Soviets to salvage a win failed spectacularly as they rolled a 12 when attempting to remove their disruption status.

I’m quite happy I played this the whole way through.  By turn 3, I nearly abandoned the game as I felt the Americans had zero chance of winning. They had failed at that point to reach any of the potential POW hexes and the Soviet 62MR was still in great shape and ready for a fight.  However, the luck of the Americans in finding the prisoners and escaping unscathed through a hail of opportunity fire made up for their agonizingly slow start and lack of activations in the early turns.  The American player rolled poorly but what’s even more important is that the Soviet player somehow rolled even worse.  I wanted to immediately play through it again as I felt certain the scenario would be entirely different in the flow of events.

I really enjoyed this scenario due to the tension and uncertainty.  It’s also a nice change from fighting straight-up battles.  The random element of prisoner locations (which also influences where the exit hex is located) gives it some very good replayability.  The story behind the scenario is very compelling and the write-up does a good job of immersing you in the fight.  The characters and their overall goals and dispositions serve to give you a feel that you are playing through a story of people on the ground doing the actual fighting and involved in extraordinary circumstances.  I think this story-driven campaign kind of started with Untold Stories (through the character of the East German commander, Wolf) and you can see that Mark H. Walker wanted to follow that kind of story-driven campaign here too. Great stuff!