I recently received four new items in the mail, two expansions for World at War and two games from the 1970s. 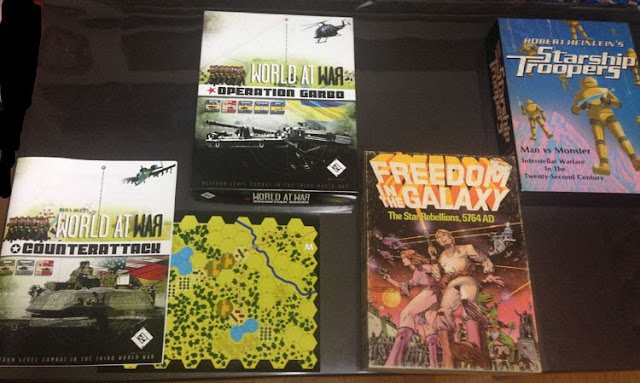 Counterattack is an expansion for the World at War series from Lock ‘n Load Publishing.  It features a new map with two campaigns.  One campaign is centered on the US counterattack versus the Soviet advance into western Europe.  The other campaign deals with the adventures of a US task force assigned to look into some strange events going on in the background of the war. 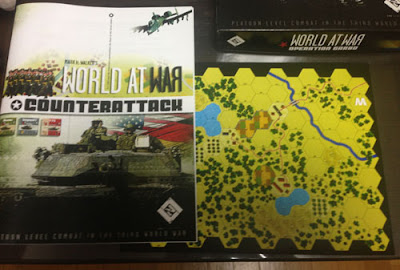 The campaigns are handled very nicely with refit points earned with each victory.  These refit points can be spent to upgrade your units, repair existing units, and purchase skills.  The scenarios use the Blood & Bridges map and the expansion map.  There’s are nine scenarios with a range of sizes from small two-unit skirmishes that last five turns to a couple of larger battles with seven formations.  The layout of the book looks quite nice with several nice drawings and pictures to add some flavor.  I especially liked the FBI stamp on the pictures dealing with the Steckler campaign, which is a nice nod to its “X-Files-ish” theme. 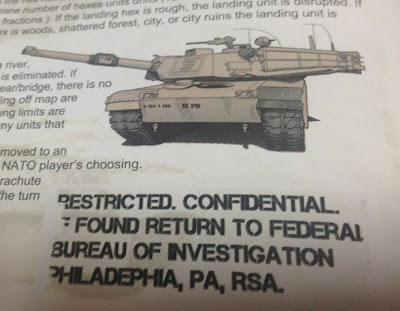 Operation Garbo is the second game I received, which is another expansion for World at War.  It’s based on the Soviet invasion of Sweden in the World at War universe (World War 3, 1985). 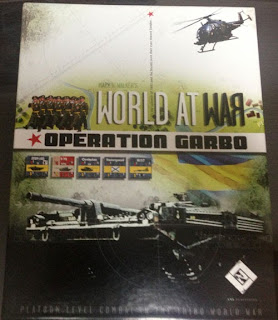 I really enjoyed playing through the scenarios and I found the Swedish units and maps were given a unique flavor.  I especially liked the special defense value for the STRV (or “S” Tank) when concealed as this reflects the relatively low hull of the tank.  The mounted firepower for the PBV was also a good way of dealing with how Swedish troops were trained to fire effectively from the vehicle in battle.  The scenarios are mostly of the smaller variety and I was able to play through most of them in a little over an hour (although the final scenario is bigger and did take a bit longer).  One of the scenarios has a neat backstory where a Swedish commander is shot down out of his helicopter and has to lead a small group of guerrilla units against a Soviet airborne regiment and a tank battalion.
While I’ve been getting my World at War fix lately, I’ve also been playing some wargames with a space theme.  Freedom In the Galaxy was originally released by SPI in the late 70’s as part of the Star Wars craze at the time.  Later on, it was re-released by Avalon Hill around 1981 and this is the version which I have just received. 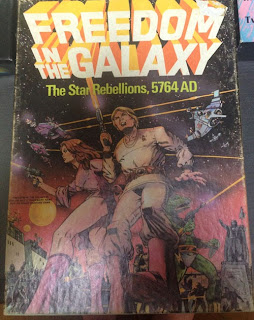 Freedom in the Galaxy is, to put it mildly, a blatant ripoff (some might consider it a parody) of Star Wars.  It is a sci-fi wargame for 2 players where one player is the Rebel Alliance and the other is the Empire.  Both players get characters that are almost carbon copies of Star Wars characters and it’s kind of impressive that no one got sued over this game.  Despite the similarities, Freedom in the Galaxy has some really interesting mechanics and some definite flavor.  One of the books in the game is given over entirely with background of the various races, characters, spaceships, and planets in the game, so it ultimately does try to take its heavily inspired Star Wars-ish universe and flesh it out into something unique and interesting for the players.  The rebels have to send out their characters to different planets and perform various missions in hopes of kicking off a rebellion that will topple the evil empire, which has its own characters and units to try and stop them.
There have been some complaints on BGG that the game is unbalanced despite some attempts by various writers and fans of the game to try and redress this issue.  I still haven’t gotten around to playing it yet but since I’m more interested in narrative than balance, this fact didn’t bother me enough to prevent me from purchasing it. 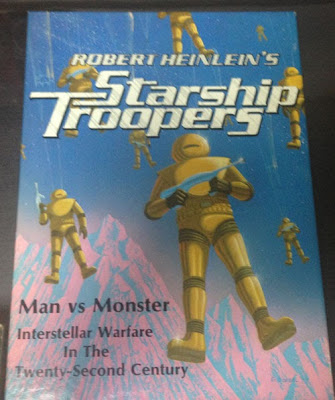 The final game I recently purchased is “Starship Troopers”, the 1976 game from Avalon Hill.  I’ve always loved the novel and I even enjoyed the movie from the 90s.  I dig the pulpy drawing on the box cover.  This is a hex and counter game of man-to-man (or man-to-bug) combat.  It looks just great and I was surprised to find out how much love was put into this product as shown by the rulebook’s use of photos, schematics and other bits of stuff related to the novel.  It’s pretty impressive for 1976.
I haven’t played this game either yet but I can already tell I’m going to enjoy it.