All content published herein is copyright 2017, Brad Smith. Images are either stock photo standard rights or public domain. Please contact me at this domain if you wish to use any of the material or images posted to this site.
Today, I replayed scenario 2 from Avalon Hill’s “Tac Air”.  In my previous playthrough, the Soviets had the West Germans on the ropes just outside the town of Bayreuth.  However, a little intervention from some Tornadoes on an air interdiction mission ended up saving the day for NATO and shutting down the Soviet offensive completely.  On this playthrough, I resolved to fix some of my earlier mistakes.
As the Soviet commander, I placed the HQs closer to the frontline and surrounded them with interlocking air defenses.  The West Germans did much the same and in order to avoid the beating from last time, they let a handful of units defend the town while setting a trap with a reserve of tanks and infantry. 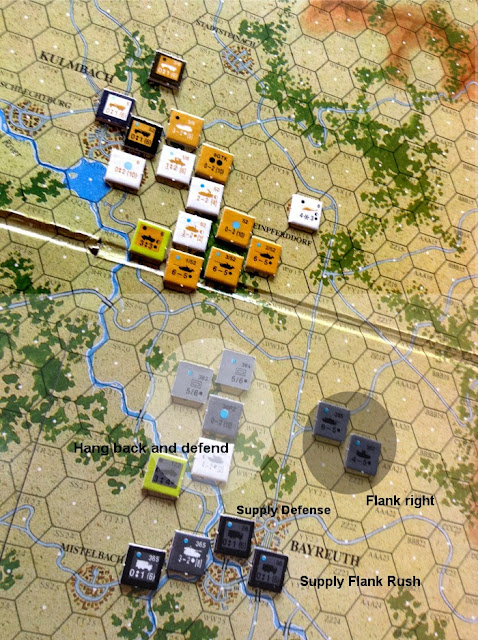 Both sides started off much more cautiously this time around, avoiding the over-use of roads so as not to get nailed out in the open by air strikes.  The West Germans did not rush in to meet the approaching Soviet tank battalions.  They set up a small defense and hoped to rush their reserve units into the Soviet flank in order to hit at their vulnerable support units or capture their objective hexes to the west, the city of Kulmbach.

In the early turns, airpower for both sides was mainly used for direct air support, inflicting some light damage on frontline units fighting around Bayreuth. The nearby HQs, however, quickly helped the disrupted units recover and get back in the fight.

The West German right flank approach was not as devastating as the West German commander had hoped although it was very effective in keeping the Soviet commander from committing all his available combat units to the attack on Bayreuth.  Having two different command HQs helped the Soviets as the headquarters of the 52nd Guards Tank Regiment directed the attack on Bayreuth and the higher HQ of the 6th Guards Tank Division commanded the Soviet reserve units protecting the Soviet left flank.  On the other hand, the West Germans benefited enormously from two separate supply units, one of which fed the defenders of Bayreuth while the other supply unit slowly moved behind the flanking West German units.

By mid-game, the Soviets had been absolutely unable to breach any gap in the defense of Bayreuth and had inflicted only minimal damage on the West German flanking units, who had entered Kulmbach.  Su-25s swept in over the battlefield on air interdiction missions, however, and nearly destroyed one of the West German supply units.  This ultimately halted supply of the West Germans who had captured Kulmbach and the Soviets focused all of their attention on them.  The 6th Guards Tank Division HQ directed two Soviet tank battalions to destroy a West German tank brigade, which they happily did after two turns.   Subsequent attacks along with another Su-25 strike finished off the West German infantry by turn 8. 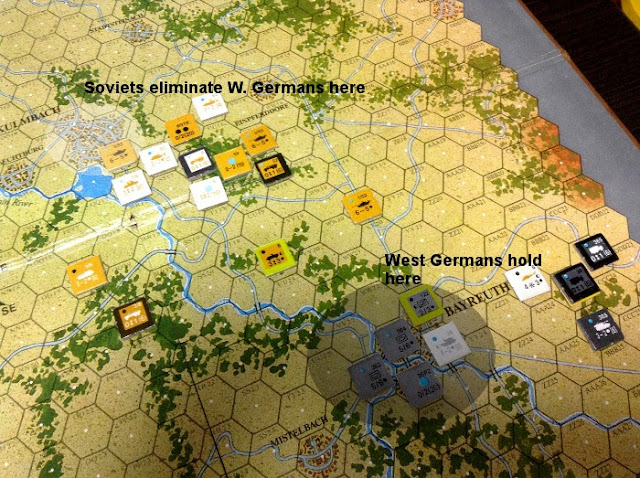 This marked the turn limit and end of the game.  Although the West Germans had successfully held Bayreuth, they had taken a gamble and lost in their attempt to capture Kulmbach.   Although NATO had been using its airpower throughout much of the game to try for a lucky hit on the 6th Guards Tank Division HQ, AAA and SAMs had kept the Tornados at bay.

Although both sides had some artillery, it didn’t really come into play for fear of counter battery fire on both sides.  The West Germans suffered from a real lack of air cover due to their reliance on a single unit of Gepard AAA with limited range.  The Soviets seemed to finally learn their lesson from the last disastrous game and group air defense around the highest HQ.  Had the West Germans taken more care with their supply units and played things a bit more conservatively, it may have made for a NATO victory.