Turn 4 begins and the clock is ticking down on the American submarines in their attempt to break through to the Soviet bastion north of Hokkaido.  The scenario is over at the end of this turn and the US  has incurred serious losses.  So far, the Americans have one submarine lost (Bremerton) and two damaged (Silversides and Guardfish) so the heavy work is left to the two remaining fully operational US subs (the Dace and the Springfield).

As day 2 of the battle dawns, both sides put their air units to work. The Americans place all of their P3 Orions on tactical coordination missions while the Soviets do the same.

Both sides have already detected the nearby enemy submarines.  The USSR starts off the turn with no less than 4 submarines sitting adjacent to the American subs.  The Dace and the Springfield are stacked together in the Soviet close defense hex, desperately fighting a close range battle on all sides. The Guardfish, meanwhile, is damaged but not completely out of the fight.

The US commander desperately needs to get his submarines into the Soviet bastion area, which is 4 hexes away.  This means that only the Dace and the Springfield will be able to make it there at full speed.  The damaged American submarines will have to fend for themselves, hopefully surviving the scenario and thereby preventing the Soviets from accumulating any more victory points.

Further to the north, the Soviets are planning to chase down and sink the USS Silversides, which had been damaged heavily in yesterday’s underwater battle.  Three Soviet subs sit nearby, ready to pursue the Silversides.  Unfortunately, in the local detection phase, the lucky American sub remains undetected while it licks its wounds and plans for a withdrawal from the area.  The Silversides survived 14 patrols during WWII and the skipper is determined not to lose it now!

US Turn:  The Silversides slips away two hexes from the nearby Soviet submarines.  Still undetected, it looks like she will indeed survive this battle.

Further south and deep below the dark and cold waters of the northern Pacific, the Dace and the Springfield make their final gambles.  Both submarines attempt ASW attacks on the Shtorm, but even with tactical coordination from the P-3 Orions, their efforts go unrewarded (both subs roll a 0 for the ASW attack).  Deciding to call it a day, they run at full speed into the Soviet bastion zone.  Unless they are sunk by the Soviets this turn, this entry into the zone is worth 12 points for the US player by game’s end.

The USS Guardfish slips away from the massive Soviet submarine presence and move two hexes to the southwest.  It is detected. 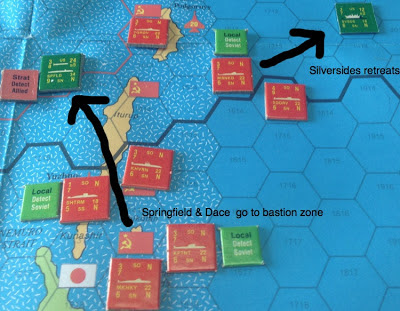 The Soviet commander is not happy that the American submarines seem to be slipping through their fingers.  Despite a tight net around the US subs, they seem to be slipping away.  With the escape of the  Silversides undetected, the only alternative is to send a token force to finish off the Guardfish as it runs southeast for Japan and focus the rest of the force on the Americans in the bastion zone.  Surely, with the help of some luck and judicious use of the I38 recon aircraft for tac coordination, the Soviets will manage to hurt the Americans.

The Soviets rush subs to the north, making 4 attacks on the Dace and Springfield, scoring no hits.  In the southeast, two Soviet submarines attack the Guardfish, using all the available help from two I38s and one T-95G recon aircraft.  Unfortunately, the rolling is very poor and the Russians are left with little to celebrate as the game comes to a rapid end on turn 4.

Conclusion:  Final victory points are 6×2 for the US subs in the Soviet bastion zone and -3 points for the loss of the Bremerton early on in the game for a total of 9 points.  Consulting the VP chart, it seems the result is a Substantive Soviet Victory.  This loss for the Americans might have been alleviated by concentrating more firepower at the Soviet subs.  I think I may have focused so much on just moving the American subs and protecting them from the Russians that I forgot to really attack.  Assigning at more planes to tactical coordination instead of recon on the first day may have helped too.

This is a very short and tense scenario and it is a great way to introduce the player to the concept of full speed submarine movement effects and the use of close defense hexes.  It also covers a compelling topic, the so-called Soviet bastion zones, which was hotly discussed in the western press during the 1980s.

For more information about the Soviet bastion approach, check out here and here.