Victory Games followed up 6th Fleet, their successful opening to the Fleet series, with 2nd Fleet in 1986.  Featuring war in the North Atlantic between NATO and the Soviets, the game is still seen as a classic among modern naval wargamers.  But the best was yet to come.  In 1987, the third installment, 7th Fleet, series was released. 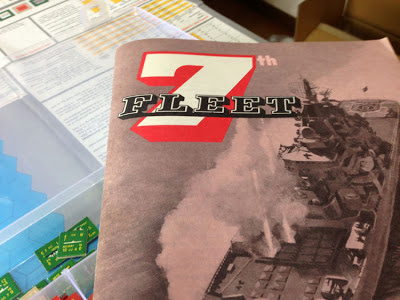 This game ambitiously took on the subject of naval warfare in the Far East.  A massive 3 map effort, the game covers a huge swath of territory that runs along the Pacific coastline from the northern Soviet Kamchatka peninsula all the way down to northern Vietnam.  Like the previous installments, the game slowly builds up the player towards mastery of the rules system through carefully planned scenarios from minor skirmishes all the way to World War III.  The result is somewhere near a masterpiece full of tense battles between Cold War navies, including Japan, Vietnam, North and South Korea, China, and, of course – the United States and the Soviets.

In the game’s 4th scenario, “Soviet Bastion”, Gorbachev has been deposed by Soviet hawks and the Soviet military efforts in Afghanistan approach the level of atrocities.  NATO leaders condemn the actions and tension builds in Europe and the Far East.  The Soviets carry out a massive military buildup and it looks like the world is headed for a confrontation, the likes of which have not been seen in more than four decades.

In the Far East, the Soviets have put into effect their “bastion theory” into practice, turning the waters from the Kurile Islands to Kamchatka into their own exclusive territory for naval operations .  Soviet submarines have been stationed around the Kurile Islands serving as pickets and ordered to prevent any breach of the area by hostile forces.  The US CINC 7th Fleet has responded by sending 5 American submarines into the bastion area in an effort to report on movement of Soviet convoys.

The Soviets have air support in the form of recon planes stationed in Alexandrovsk while the Americans have P-3 Orion aircraft stationed in Misawa, Japan.

The Soviet commander is determined to keep the US out and has decided that a primarily defensive posture around the Kuriles should keep them out.  The Americans must setup quite far to the southeast of the bastion, which presents some special problems for them.

The Strategic Air Phase begins and the Soviets are confident that the US submarines will be detected by either Soviet submarines or the close defense area near the Kuriles.  As a result, most of the Soviet air assets are put into tactical coordination to help with attacks on the American SNs.

The US puts all three squadrons of P-3 Orions into reconnaissance efforts near the tip of Hokkaido.  The P-3s do an excellent job of pinpointing the location of 3 Soviet submarines.

A newer Kilo class diesel sub, Shtorm is detected, along with a fearsome Sierra I class, the Admiral Khovrin and a Victor III, the Admiral Mikhaylovskiy.

NATO rolls initiative and the American subs are presented with an immediate problem.  They need to make it into the bastion area by tomorrow afternoon and the only way to close the distance effectively is to run at full speed.  This means the American subs will be detected more easily as they reach the Kurile Island chain.

Deciding to press ahead, the American subs split into two groups.  It would be suicide for all of them to attempt a passage through the same area so the commander is hoping to split up the Russian pickets a bit and create enough room to push through the close defense hexes (denoted by a flag on the map).

Two Permit-class subs, the Guardfish and the Dace, along with a deadly Los Angeles-class submarine, the Springfield head towards the gap between Hokkaido and the southern Kuriles.

Meanwhile, the Bremerton (Los Angeles class) and Silversides (Sturgeon class) head north, hoping to draw off some of the Soviet submarine fleet.

The Soviet commander decides to move an extra submarine, the Admiral Kapitanents (Victor III class) down south to reinforce the southern approaches to the Kuriles.

The three northern Soviet subs head south to greet the Silversides and Bremerton, hoping to detect, engage, and delay them.