Yesterday I pulled out the World at War expansion, “Death of the 1st Panzer” and decided to play scenario 1, “Blind Sided”.  I’ve played this scenario before many times and my Soviet tanks almost always end up as heaping wrecks strewn across the West German countryside.

Trying to improve a bit on my Warsaw Pact tactics, I ended up playing this same scenario several times just to see how different approaches would affect the outcome.  In this short article, I’m going to demonstrate the very different flow of three different playthroughs of this scenario and the lessons I learned from them in regards to World at War tactics.
In the scenario, “Blind Sided”, the West German 1/171 Panzergrenadiers is caught by surprise by elements of the Soviet 1st Tank Army on the opening day of the war on May 14th, 1985.  The Soviet commander’s job is to capture all the city hexes of Walkerburg in the southwest corner of the map while the West Germans, caught out of position and by surprise, must scramble their meagre forces to defend it.  The scenario is only 8 turns but the smaller map means that the Soviets don’t have to cover too much ground to get to their objective.
The scenario starts with two platoons of Marders and infantry along with a Jaguar sitting on the road to the northeast of Talen.  The 1st Tank, with eight T-72 platoons and a BRDM-AT, gets a free activation to begin the game.
Game 1
In my first game, I decided to try and use the hills to the south as cover for the Soviet 1st Tank, hoping to get some good activations and push them into Walkerburg without taking any losses.

The Soviets got some very nice activations here.  They activated twice in the first turn and in each subsequent turn, they leaped forward to their objective. 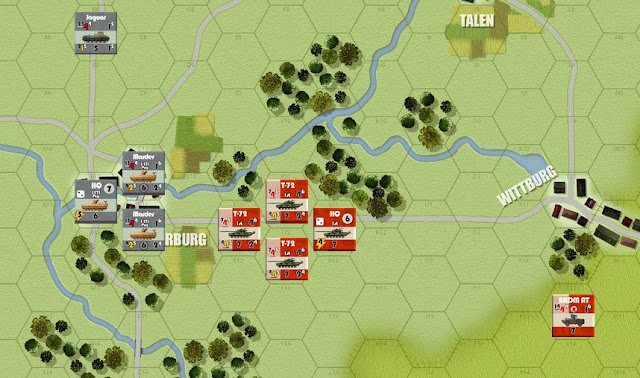 Unfortunately, this also let the West German Marders and Jaguar waltz back to Walkerburg and set up infantry (with Milan ATGMs) and Marders in the city to await the onslaught of the 1st Tank.  On Turn 5, 1st Tank received the first activation chit and approached.  Predictably, a slaughter ensued as 1st Tank rushed the city and the Soviet T-72s were crushed by a hail of anti-tank missile opportunity fire followed by two activations of the 1/171st PzG.  Turn 6 started with two activations of the 1/171st, which was more than enough to make short work of the Soviet 1st Tank.  Clearly this approach was not going to work for the Soviets.
Game 2:
So I set up the same scenario again and decided to go with radically different tactics for the Soviets.  The major weakness of the West Germans is the thin armor for their Marders and the fact that most of the elements of the 1/171st start out in the wide open road without defensive cover.  This provides an opportunity for a very aggressive Soviet opening.  Instead of preserving my forces through a long march through the southern hill route, I was going to go for the throat right off the bat.
I pushed the Soviets onto the board from X4 and hoped for the best.  Opportunity fire from the Marders (the infantry were loaded inside, unable to fire their Milans) destroyed and disrupted a handful of Soviet platoons but the damage was surprisingly minimal.  Moving fire from the Soviet tanks managed to reduce one of the Marders and infantry.  The BRDM-AT moved into the city down south and got into a firing position.
The next activation chit was 1st Tank, which was extremely lucky.  Soviet HQ called down artillery, disrupting a Marder with the HQ and also disrupting the Jaguar.  From that point, it was simply a matter of marching forward with moving fire and pasting whatever was left of the 1/171.  By turn 3, there was nothing left of the West Germans and Walkerburg was easily taken by turn 7.
Game 3
This was the most even game of the three and probably the best of them.
The Soviets opened with the same moves as before but did not meet with the same amount of success.  Although the West German Jaguar and one Marder (along with loaded infantry) were destroyed in the opening salvos (again with solid 1st Tank activations coming one after the other in the first turn), the Germans were not pulverized completely.
The HQ, Marder and infantry wisely moved back from the Soviet onslaught and made their way to Walkerburg where they set up a defensive position and waited for the Soviets.  Thanks to decent West German opportunity fire, the Soviets had only 2 full-strength T-72 platoons, 4 reduced strength platoons, and the BRDM- AT.
The Soviets tried their best to keep what remained of their battered force.  The BRDM-AT managed to disrupt the Luchs sitting in Talen.  The Soviet HQ then assaulted it in the town, opening up a path down to Walkerburg.
As the game turn limit approached.  The Soviets found themselves facing a stack of unloaded infantry and Marders in one corner of the city.
The last turn came around and the Soviets were in perfect position for an assault.
With two full strength Soviet platoons sitting to the north of Walkerburg and the remainder of the  reduced T-72s sitting to the east of it, there was just enough fight left to try and take the city.
Of course, it could have all gone wrong.  If the Soviets didn’t activate, the game would be over and NATO would chalk up a win.  As it turned out, however, the first chit pull was 1st Tank and the plan went accordingly.
Two reduced platoons rushed into the city and were disrupted and destroyed, respectively, by opportunity fire from the West German Marder and Milan.  The full strength units rushed south and hit the West Germans hard, scoring 3 hits while taking the same lumps in return.  The West Germans now found themselves facing down an HQ with a reduced Soviet T-72 platoon while they themselves had only a disrupted group of infantry and a reduced Marder.
The final rolls came in with the Soviets scoring a single hit on the West Germans in a brutal assault while the West Germans, rolling for 6s, scored nothing.  With nowhere left to retreat, the West Germans were eliminated and the Soviets held Walkerburg.   It had all come down to the wire with no room for error for either side.
Discussion:
Well, the Soviets were successful in two of these three games, taking a huge gamble right off the start by entering the board and firing away at the West Germans.  Had the rolls not come out right, things could have gone very badly for them.  The “safe” option in the first game of using terrain and the southern hill route turned out not to be so safe after all.  There are times that the Soviets really need to just take a huge risk and go for broke when the enemy is vulnerable.  With more forces at their disposal, the odds of the Soviets scoring that critical hit that eliminates a vital NATO unit are not so bad. The key is to get your guys firing at NATO rather than just moving all the time, which can allow the enemy get into a nice defensive position.  Even shooting from a bad position (long range, moving fire) is better than this option, I find.